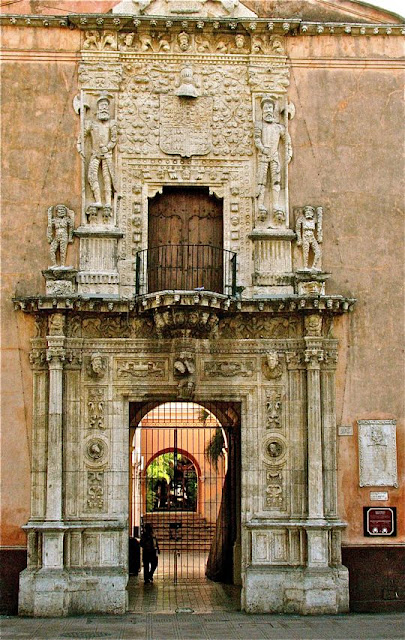 Palace of Don Francisco de Montejo occupies one side of Mérida's Plaza. Another city we visited on our Caravan Tour was Mérida, capital of Yucatan State. Because of its geography, Yucatan has always been isolated from the rest Mexico. For centuries, it had more of a relationship with Old Spain than with the rest of New Spain. Carole and I loved Mérida's old colonial architecture. Much of it has fallen into disrepair, but some of it is undergoing rehabilitation as people, many of them foreigners, rediscover Mérida. Because of the odd weather found all over Mexico in February of 2010, Mérida was cool rather than hot and muggy as we had expected. The Palace above was originally built by the son of the conquistador who attempted to conquer the Maya of Yucatan in the 1540s. Members of the de Montejo family lived in it until the early 1980s. For an interactive map of Mérida and the Yucatan Peninsula, click here. 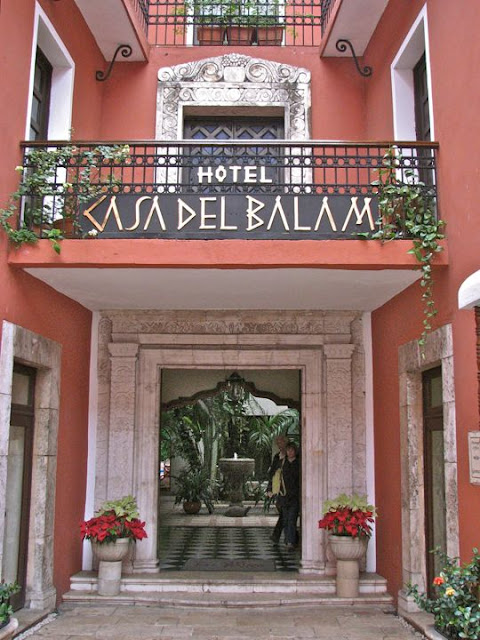 We stayed in The House of the Jaguar. Casa del Balam was one of the beautifully restored old colonial hotels which at one point was the home of one of Merida's most distinguished families, that of Fernando Barbachano Peon. Casa del Balam is one of the few original Art Deco houses left in Mérida. It is located in the heart of El Centro, near the University of Merida and the Jose Peón Contréras Theatre. 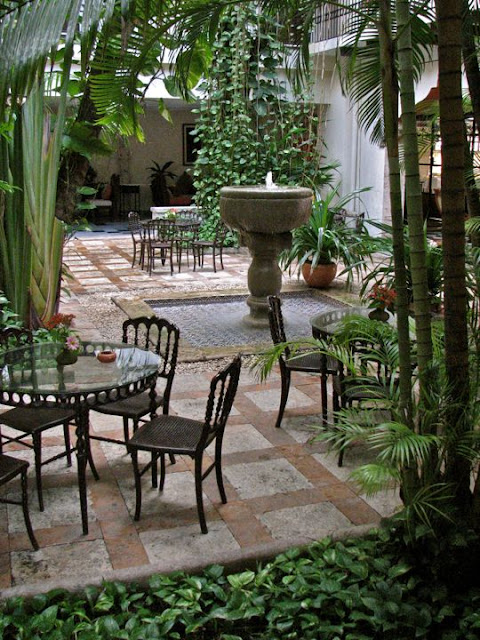 Casa del Balam is built around a cool and jungly atrium courtyard. Above, a fountain quietly gurgles in the courtyard. A vine-entangled tree rises several stories in one corner. I half expected the namesake jaguar to poke its head through the greenery. The hotel is decorated with the large, old-fashioned, hacienda-style wooden furniture, and even the bathroom sinks have hand-painted designs. 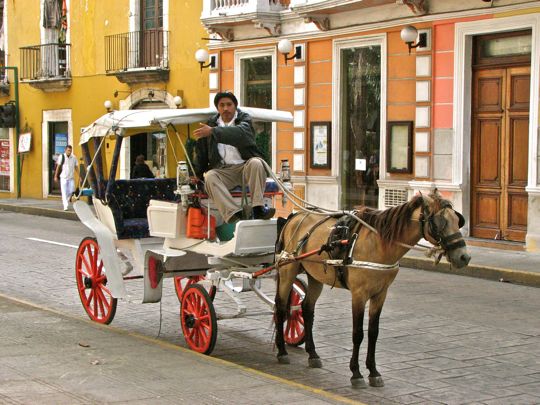 "Hop aboard!" When we stopped on the street a block or two from Casa Balam, the carriage driver motioned for us to jump on. To his disappointment, we declined, since we had ridden all day in the bus and wanted to explore Merida's El Centro on foot. Photography is also more difficult from a moving vehicle. Behind the carriage, you can see some of the wonderful old colonial architecture in El Centro. 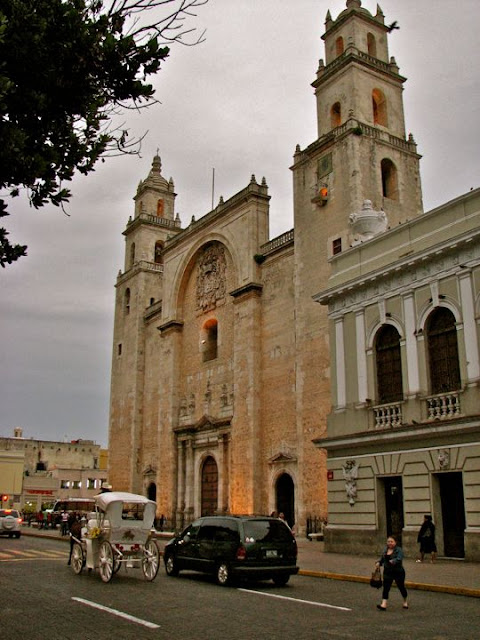 Merida's Cathedral at twilight. The carriage driver found another set of passengers and was just in front of the church when I took this photo. The Cathedral was built between 1561 and 1598 by Pedro de Aulestia and Miguel de Auguero. It stands on the site of an Maya temple. Under a policy established by Hernan Cortés, the Spanish built churches on top of pagan temples to graphically demonstrate who was in control. Inside the church is an Indian woodcarving. Legend has it that the Indians took the wood from a tree that burned all night without showing any signs of damage. It has been in the church since 1645 and is especially venerated in October of each year. 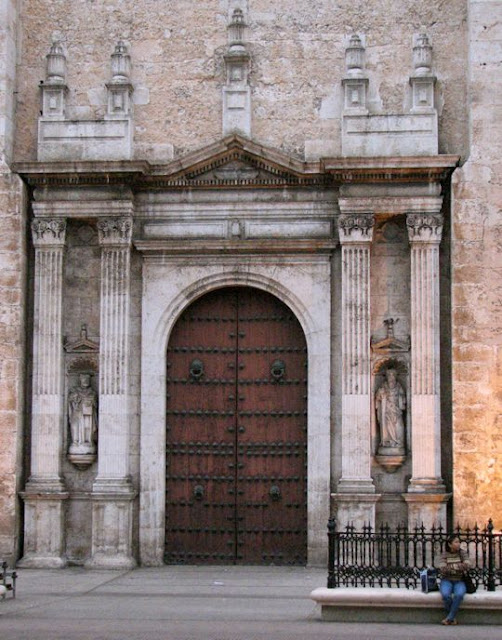 A massive, iron-studded wooden door guards the entrance of the Cathedral. The Cathedral of San Ildefonso in Merida is one of the oldest in the Americas. It was built on the orders of Phillip II of Spain, the same king who sent the Armada to disastrous defeat against Queen Elizabeth I. 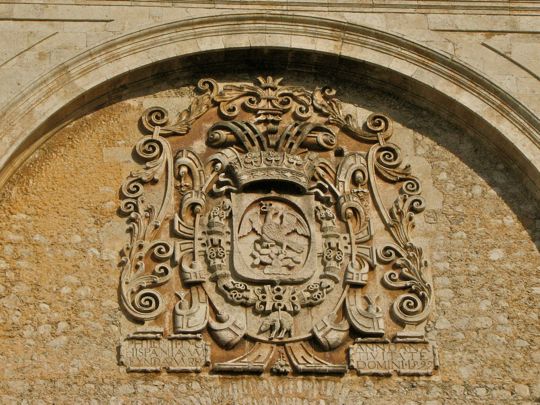 King Phillip II left his mark in Mérida. The coat-of-arms above was awarded to the Cathedral by King Phillip. The church was built in a variety of styles, including Moorish, Renaissance, and Baroque. Some of the stones used in construction came from the old Maya temple. 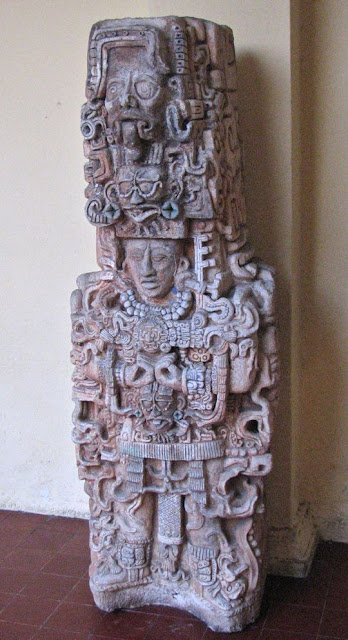 Mérida was old when the Spanish arrived. The original Maya name for what became Mérida was T'hó, or Ichkanzihóo, which means "city of the five hills", referring to five pyramids. The Maya community had existed long before Francisco de Montejo conquered the Yucatan Peninsula. His son Francisco de Montejo "el Mozo" (the boy) founded the colonial city of Mérida in 1542. Because the site had been a center of Maya culture and activity for hundreds of years prior to the Spanish arrival, some historians consider it to be the oldest continually occupied city in the Americas. The Mayan statue above is a reproduction of one found in one of the many ancient ruined Maya cities within a couple of hours of Mérida. 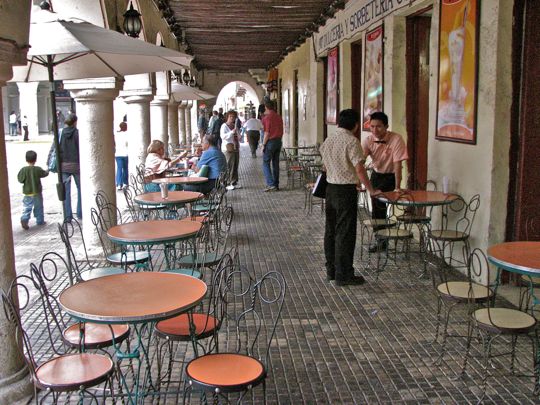 Graceful living in old Mérida's El Centro. We found many sidewalk restaurants like the one above in the streets around the main plaza. Places like this are among my favorites in Mexico. I love to "people watch" while sipping a cup of delicious Yucatan coffee, or sampling some of the local cuisine. There's always something interesting going on in a Mexican plaza, and Mérida's was no exception. 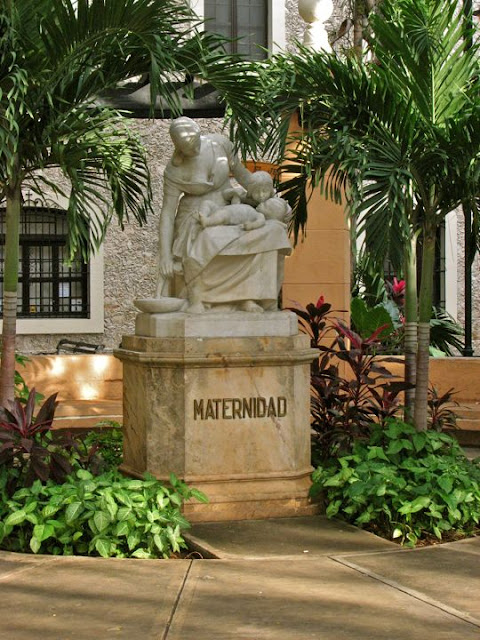 Tribute to Motherhood. While wandering a side street, I stumbled across this little monument in a tiny plaza. The statue celebrates "Maternidad," or motherhood. The family is an extremely important institution in Mexico. 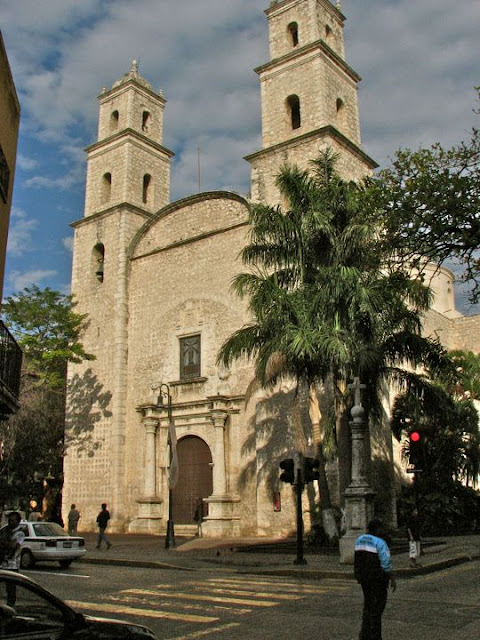 Old Gothic church towered over the Maternidad statue. It was probably no coincidence that the monument to motherhood was built adjacent to this church. 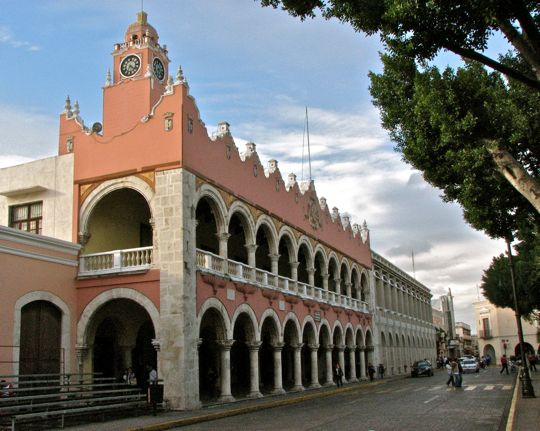 Palacio Gobierno occupies one side of Mérida's main plaza. Mexican plazas are very predictable in design. One side will be dominated by a church, in Mérida's case the Cathedral, another side will be occupied by the state, in this case the municipal government (equivalent to a county seat in the US). Originally built by Spanish Governor Santiago Aguirre between 1734-36, it has undergone numerous changes over the centuries. The present building is marked "1821," which was the year Mexico won its independence from Spain. The arches and columns, called "portales" are another very typical feature of a Mexican plaza. King Phillip II decreed that such portales should be built in every plaza of New Spain in order that those seeking to do business in a plaza should be sheltered from the hot sun and rain. 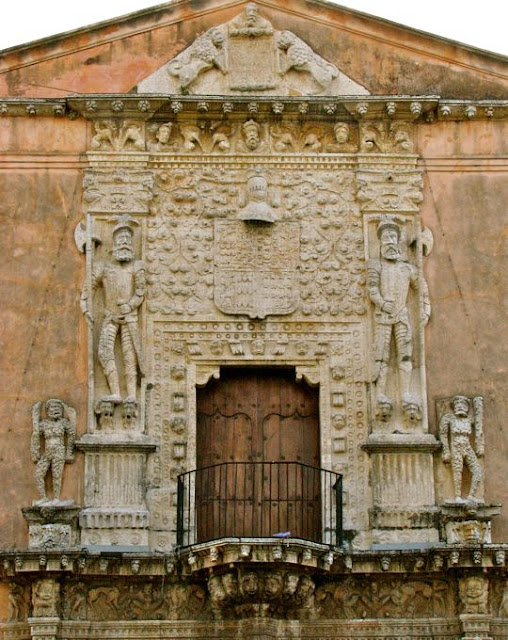 Detail above the entrance to the palace of Francisco de Montejo, "el Mozo." The Spanish first landed on the Yucatan peninsula in 1517, even before Cortés arrived on the scene. They were driven off by the Maya in 1517 and 1519. Francisco de Montejo, the father of "el Mozo," made the first real attempt to conquer the Yucatan Maya in the 1528, but once again met bitter resistance. De Montejo (senior) kept at it and seemed to win but was driven out in 1535. He later went on to become Governor of Honduras. 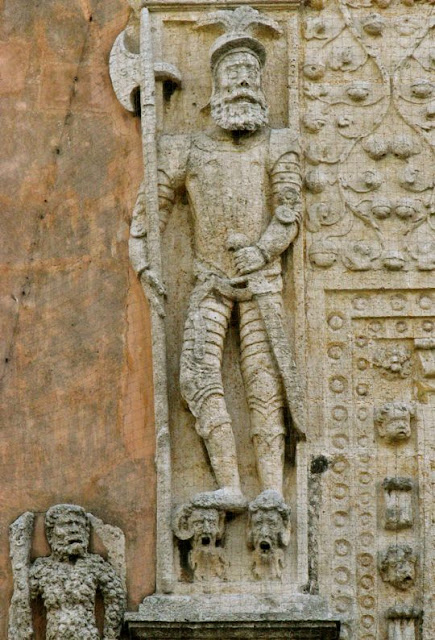 Junior wins the day. It fell to the son, Francisco de Montejo, "el Mozo", to finish the job. Maya resistance finally ended in 1542, more than 20 years after the Aztecs collapsed. Historians have speculated that a centralized state like that of the Aztecs was much easier to conquer, because one had only to take its capital and kill the king. In Yucatan, the Maya were much more decentralized and dispersed, and engaged in guerrilla warfare for decades. The detail shown above, from his palace's entrance, may display "el Mozo's" attitude toward those he conquered. A Spanish conquistador stands on two heads crying out in pain and horror. A similar statue stands on the other side of the balcony, also treading on the heads of "el Mozo's" victims. Whether or not these are actually intended to represent Maya heads (some people disagree), "el Mozo" conquered the fiercely resistant Maya with great brutality. 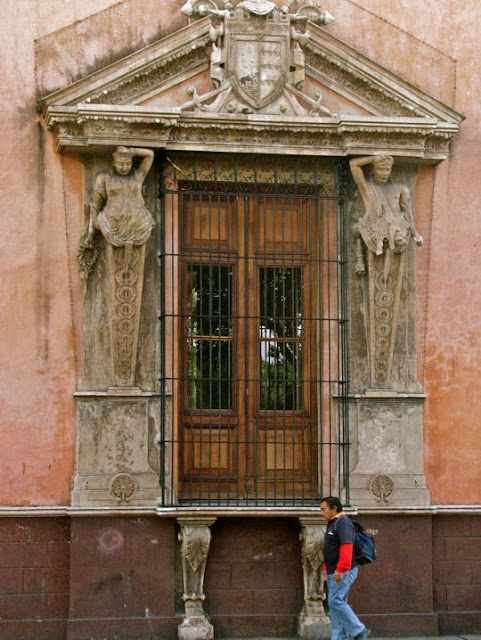 Window of "el Mozo's" palace also displays interesting sculptures. The palace was built in a style known as "plateresque." Francisco de Montejo's home is considered by architectural historians as the finest example of this style in Mexico or even the New World. According to an inscription, the palace was completed in 1549. Plateresque drew on Gothic, Moorish, and late Renaissance styles. 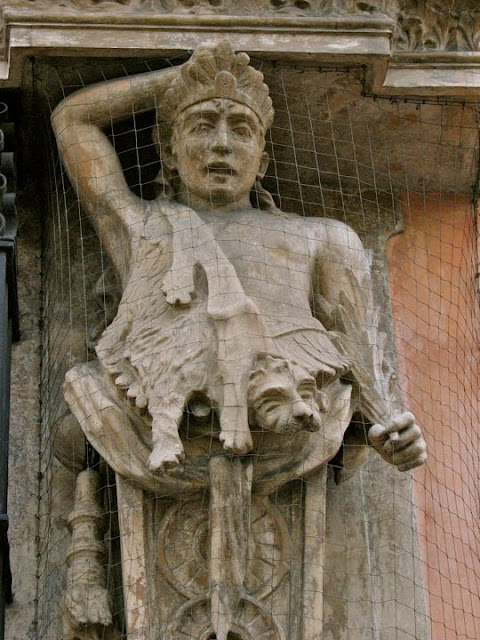 A more peaceful view of the Maya. This detail is from the right side of the window shown in the previous photo. The male Indian wears a feathered head dress and the skin of a wild animal, possibly a jaguar. The statue is covered by chicken wire to fend off pigeons, the bane of statuary.

A day in the park. A young mother looks on indulgently as her small daughter feeds hundreds of pigeons in the main plaza of Mérida. I enjoyed quiet vignettes like this, to be found all around the park and the surrounding streets, as the citizens of Mérida went about enjoying their beautiful city.

Next week, I will begin a 2-part series on Uxmal, one of the great Maya ruins of the northern Yucatan plains. Like Palenque, I got so many wonderful shots that I couldn't use them all in just one posting. If you would like to respond to this posting, you can either use the comments section below, or email me directly. If you leave a question in the comments section, PLEASE leave you email address so that I can respond.