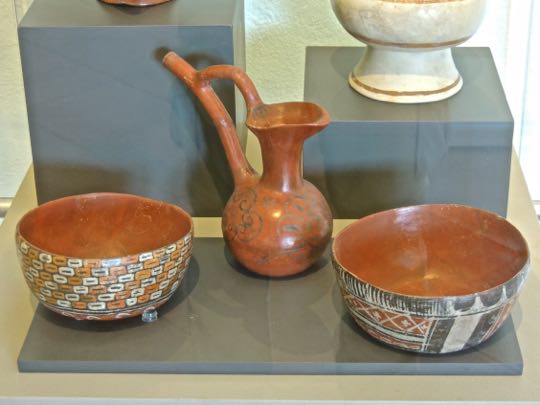 Examples of the beautifully crafted pottery found at Zultépec. I particularly liked the graceful shape of the pitcher, as well as the painted designs on the bowls. It is not clear whether these were locally made or imports. In either case, those who used them were almost certainly high-status individuals. Since Zultépec was located on a major trade crossroads, these artifacts might well have come from elsewhere in the Aztec Empire, or beyond. In my last two postings, I focused on temples, altars, gods, and the meeting place of the elite. In this one, I'll show you some of the homes of the city's residents, as well as artifacts of their daily lives. 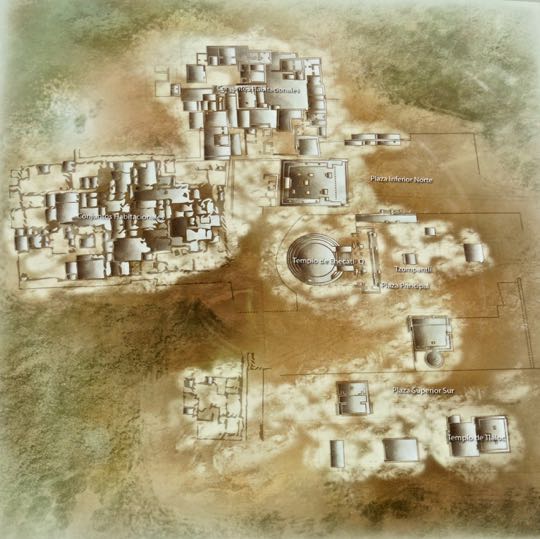 Site map showing the two major residential areas. We will first look at the North Residential Area, located at the top of the map. The West Residential area is found on the left side. In Parts 2 and 3 of this series, we looked at the ceremonial areas in the center and bottom of the map. 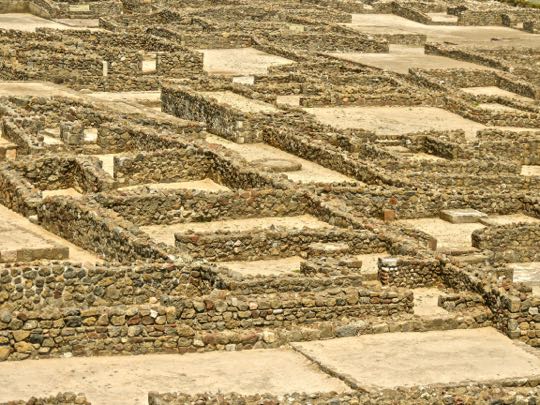 The habitations are grouped very close together and connected by narrow passageways. Since the surrounding countryside is either level or gently sloped, I wondered why these dwellings were packed together, rather that spread out. According to a nearby sign, "the purpose was to ensure the safety of dwellers." An invader would have to find a way through a dense maze of structures, defended by local warriors familiar with every twist and turn. Zultépec was an outpost of the Aztec Empire, on the frontier with its traditional enemy, the Tlaxcaltecas. 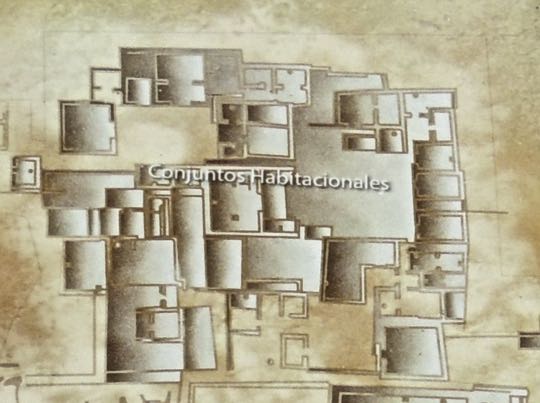 Map detail of the North Residential Area. The rooms are grouped around rectangular courtyards. These can be seen in the upper left, center right, and lower right of the map. While most of the rooms are relatively small, several are quite large. They could have been occupied by wealthy merchants or members of the elite. On the other hand, they might have been workshops for one or more families. 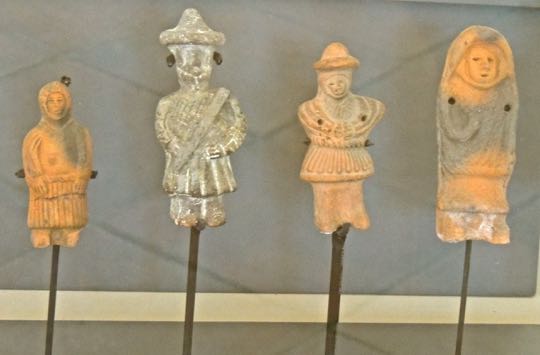 Meet the Zultepecanos. The two figures in the middle are male, with females on either side. The men wear conical hats with brims and their pleated tunics end at mid-thigh. The man on the left has a strap over his shoulder, from which a small bag is suspended. The women both wear some sort of hood on their heads, possibly a shawl resembling the traditional Mexican rebozo. Their skirts extend to their ankles and are topped by a mid-thigh-length blouse. All these appear to be high-status individuals. Ordinary people would have worn much simpler garments and, in any case, statues of them probably wouldn't have been made. 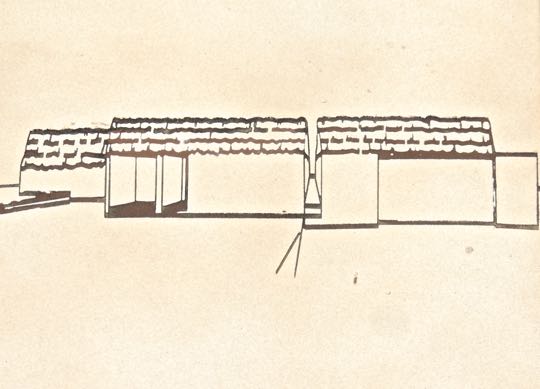 Artist's conception of the habitations. The walls were made from the easily worked volcanic stone that was plentiful in the area. They would have been covered with lime plaster. The roofs would have been of wood and thatched materials that have long since disappeared. 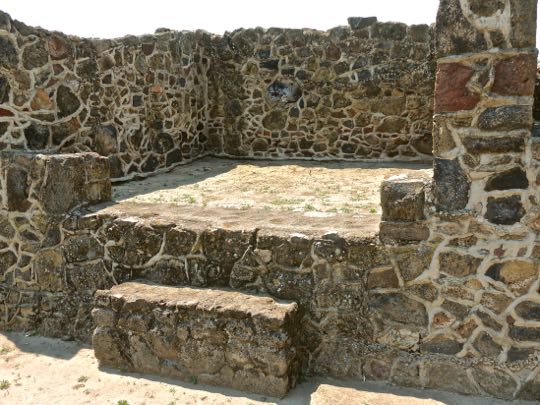 Raised room with a step at the threshold. Rooms like this were used for sleeping and moments when privacy was desired. Most daily living would have occurred in the patios and plazas upon which the rooms opened. One reason to raise the rooms was to protect against flooding during the rainy season. 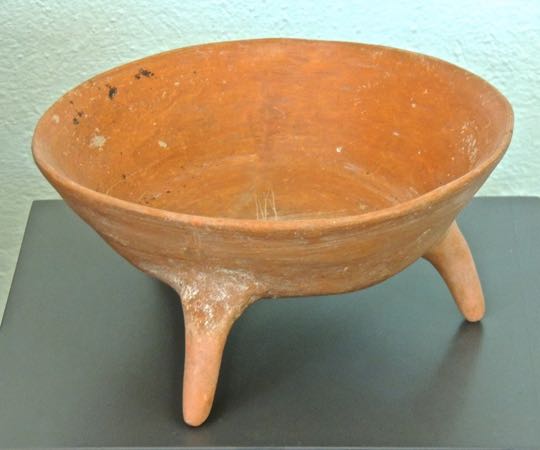 Orange tripod bowl, used for preparing or serving food. This is day-to-day kitchenware, unlike the finely crafted and painted bowls seen in the first photo. Food served in a bowl like this would have included cultivated plants, such as maiz (corn), beans, squash, amaranth, chia. The maiz would have been ground into flour on stone metates and then prepared as tortillas or tamales. In addition, the edible parts of wild plants such as maguey were also consumed. Meat would have been obtained from domesticated turkeys and dogs, as well as wild game, including deer, peccaries (wild pigs), fish, rabbits, and other small animals. 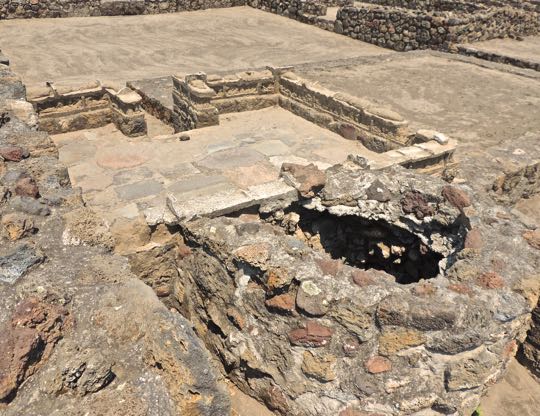 This room has an elaborate entry and a curiously-shaped stone structure behind it. The entrance, along with the beautiful flagstone floor, suggests an elite residence. The room opens on a large patio, which connects with several other rooms, suggesting an extended family compound. The cylindrical structure in the foreground is probably a water cistern, used for storage during the dry season. 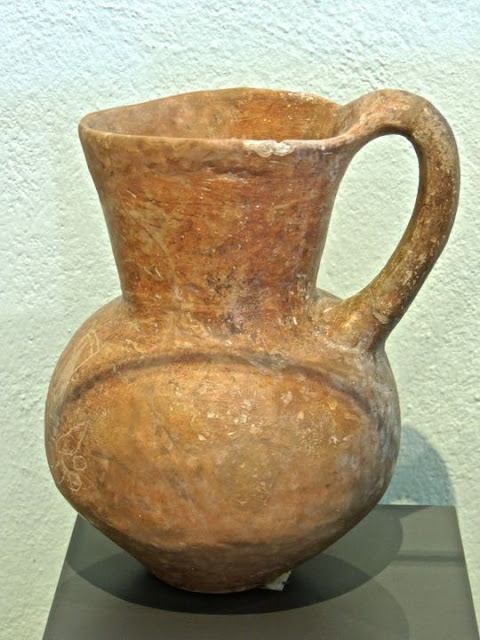 Earthenware pitcher, another item of everyday use. Compare it to the delicate pitcher in the first photo. I can image this one being used to dip water from the stone cistern seen in the previous photo. 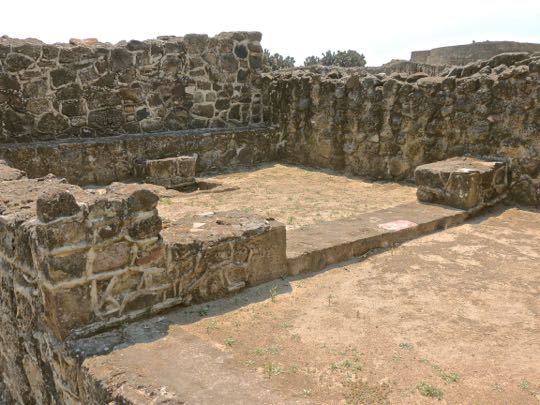 Another room with a threshold at its entrance. This one contains a fire pit against its back wall. Hearths like this would have been used both for cooking and heating. This is part of a multi-room complex. 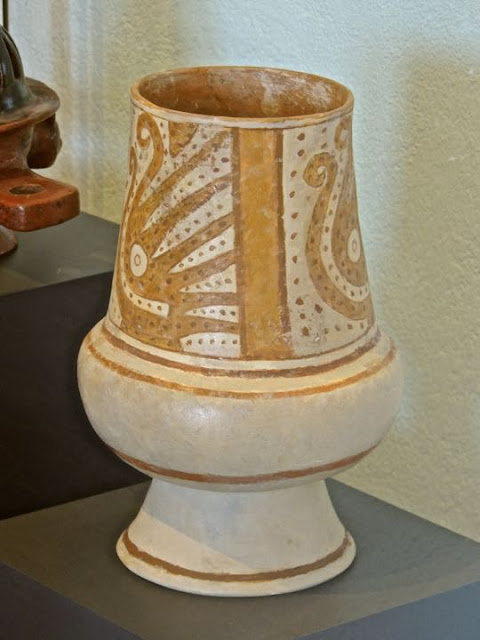 Delicate vase with a fanciful design. This piece would have definitely graced a high-status home. The animal depicted on both sides of the vase appears be an octopus, or possibly a squid. A local artist who portrayed such animals could only have obtained them from the Gulf Coast. It is also possible that the vase itself originated on the Gulf Coast, with the design inspired by local sea life. Both scenarios fit well with Zultépec's role as a trade outpost. 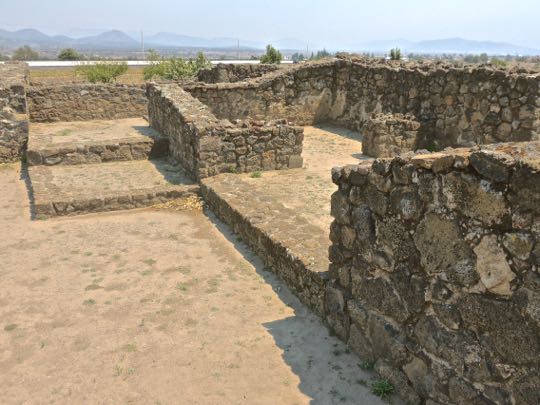 A multi-room dwelling with a two-stepped platform outside its entrance. The flat area in the foreground is part of a large patio. The purpose of the platforms is unclear. Similar structures that I have seen elsewhere were sleeping areas. However, that is unlikely here, because they are placed in the corner of the patio, outside the dwelling's rooms. 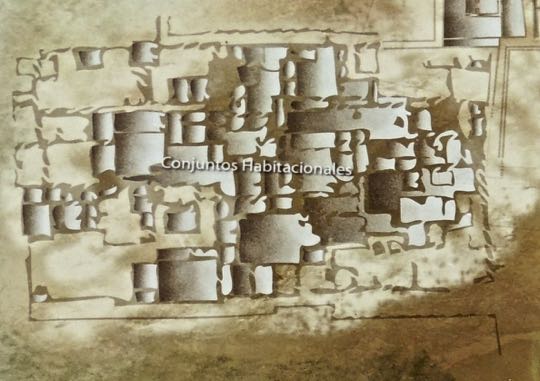 The West Residential Area is also compact and contains several patios. There are at least four patios, one in each corner of the residential area. Most of the structures are grouped in the center. 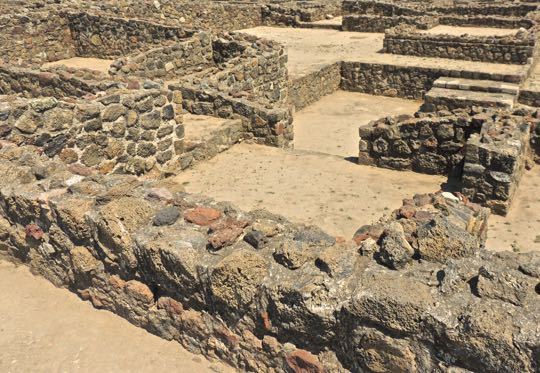 Complex of rooms, looking north. The rooms are stepped down, as they descend the slope on which Zultépec is built. Most of these rooms are relatively small, indicating a somewhat lower status than those of larger size. 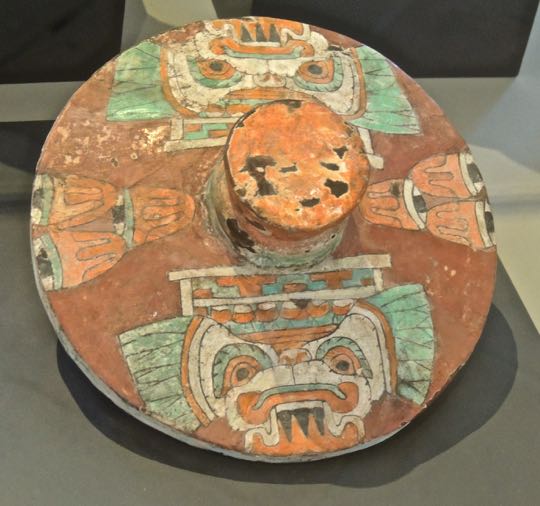 Pot lid, decorated with a pair of fanged and feathered feline faces. Pottery such as this would have been used for special occasions, or perhaps for ceremonial purposes. Only a high-status family could have afforded such pottery. 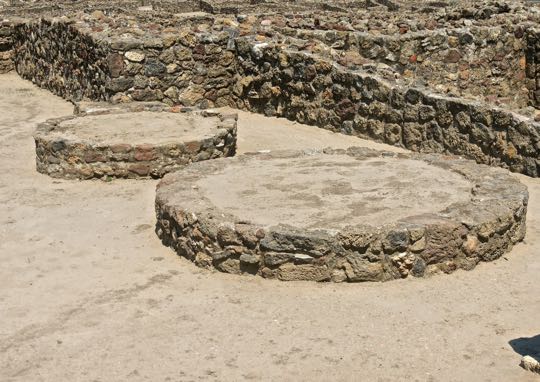 These two odd, circular structures are in the southeast patio of the residential area. There was no sign to explain their significance. They are too large to be the base of pillars. It is possible they might be water storage containers that have become filled with dirt. However, why two, side-by-side? I also thought of altars.  Occasionally, I have found circular altars in other pre-hispanic ruins, but rarely, if ever, in Aztec sites. Again, if they are altars, why two, side-by-side? If anyone has any information or thoughts on this, I would be glad to hear them. 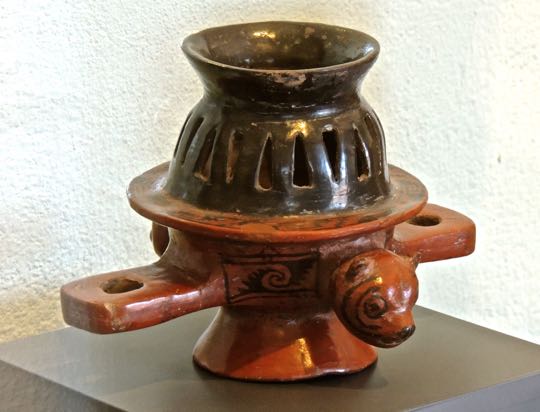 Censer with the head of a bear. This beautifully crafted piece would  have been used to burn copal incense during religious rites. These might have occurred either at one of the temples in the plazas, or at a private ceremony at a household altar. The lid of the censer is vented to draw air to the flame, while the chimney top allows the fragrant smoke to escape. Bernal Diaz del Castillo was a young officer among Cortés conquistadors. He reported that, when the Spanish arrived at a new city on their route of conquest, they were invariably "fumigated" by native priests using devices like this before they were allowed to meet with the local chief. 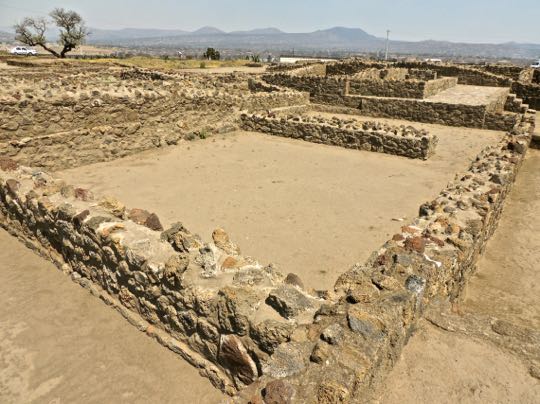 An unusually large room, with an attached anteroom at the far end. I have rarely found rooms this large in the residential areas of other pre-hispanic sites. When I have encountered them, they were dwellings reserved for top-level elites and royalty. However, such extremely high-status dwellings are generally found close to temples or ceremonial structures located in restricted areas. These areas are usually set apart from those occupied by the lower classes. In this case, the room is simply part of the general residential complex. One possibility is that spaces like this were workshops to produce items for export. Among the most important of Zultépec's products was pulque, a mildly alcoholic beverage made from the maguey plant. 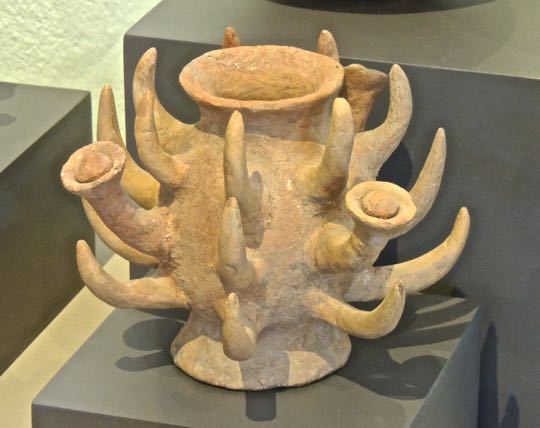 Pulque vase in the shape of a maguey plant. In the Post-Classic Era, the area around Zultépec abounded with wild maguey plants. In fact, when Carole and I visited, the fields around the archeological site were planted with agave, a species of maguey used to create tequila, the Mexican national drink. Maguey had many attributes useful to pre-hispanic people, including its fibers and its sharp spines. However, the most important of these uses was pulque. While some of this fermented drink was locally consumed, it was also Zultépec's major export product. Mayahuel, the Goddess of Maguey, was the consort of Quetzalcoatl. As we have seen, the Plumed Serpent's temple is the largest in the whole city, and is located in its most important plaza. Vessels like the one above were recovered near Quetzalcoatl's temple. 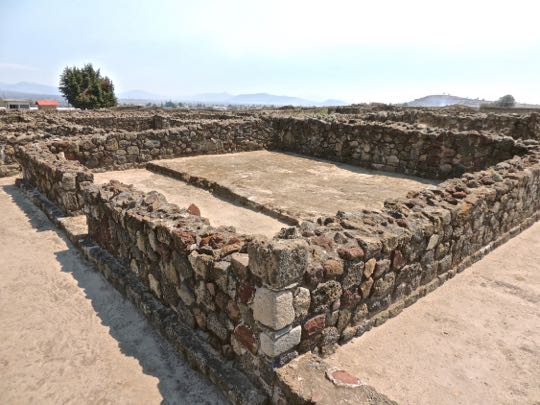 Another room of substantial size, with a raised platform in the rear portion. In "Everyday Life of the Aztecs", Warwick Bray describes the furnishings of a home: "To our eyes, even the richest house would have appeared bare and unfurnished. Wickerwork baskets or wooden chests held clothes and most of the family's belongings. Everybody, rich and poor alike, slept on reed mats, which were sometimes covered with canopies. Similar mats, placed on a wooden or earthen dais, were the most common form of seat...Other items of furniture included low tables, carved and gilded screens, wall hangings, rugs, and braziers in which burned aromatic woods." 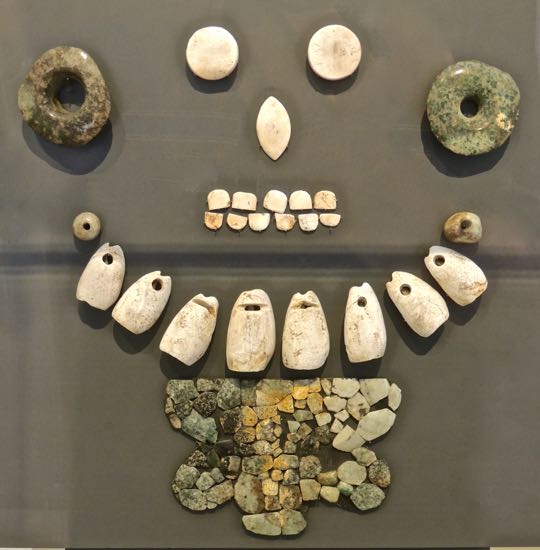 Jewelry like this was worn only by those of the highest status. The two ear spools in the upper right and left are made from jade. In the middle, the white pieces forming the "eyes", "nose", and "teeth", are carved from seashells, as is the necklace below them. The butterfly-shaped piece at the bottom is made from serpentine. All of these were imported. The jade came from the Motagua River Valley, in faraway Guatemala, while the shell items and the serpentine are products of the Gulf Coast.

This completes Part 4 of my Zultépec-Tecoaque series. I hope you enjoyed it and, if so, you will leave any thoughts or questions in the Comments section below. If you leave a question, PLEASE leave your email address so that I can respond.