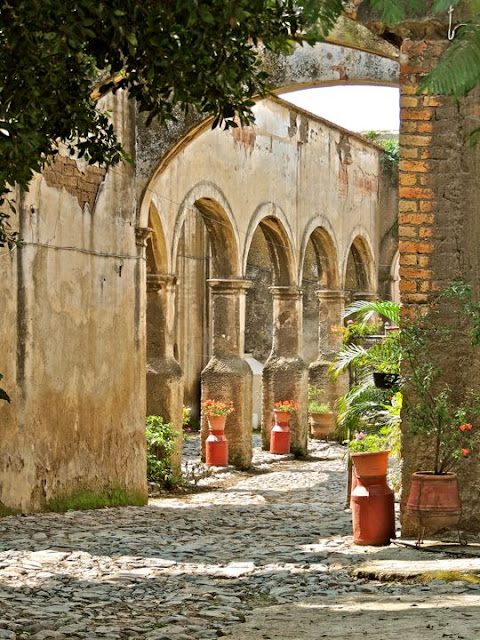 When we stumbled upon Hacienda San José del Castillo, we were actually looking for this site. When I first visited several years ago, we managed to access to the capilla (chapel) and the stables. However, we were unable to see any of the interior of the casa grande (big house) or the bodegas (storage buildings and work areas). This time, I was hoping we'd find some way to get into these areas. Most of the photos in this posting are from my second visit. However, I am including some shots I took of the stables during my first visit. The photo above is from that initial visit. 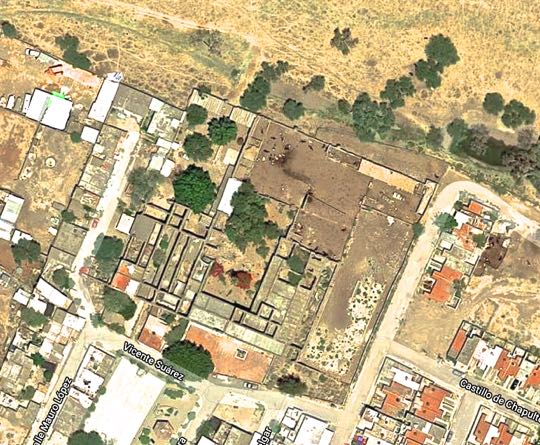 Google satellite view of Hacienda Vieja. The street called Vicente Suarez runs along the front of the casco complex, which includes the casa grande, capilla. bodegas, stables, and animal pens. Vicente Suarez is oriented roughly north to south. The streets running west to east, perpendicular to Vicente Suarez, are the northern and southern boundaries of the casco. Just above the word "Suarez", you can see a large tree in the northwest corner of a rust-colored patio. The patio runs along the front of the casa grande and capilla. To the left of these, the bodegas and stables are the series of long, narrow rooms extending toward the east.

Bordering the eastern and southern parts of the casco are large rectangular enclosures for cattle and pigs. In the center of the complex is the casa grande's courtyard. Within it you can see two large reddish bougainvillea bushes and a small grove of trees. At one time, there may have been other structures outside the casco's enclosure. However, the modern pueblo that grew up around the casco has obliterated any of these that may have once existed. 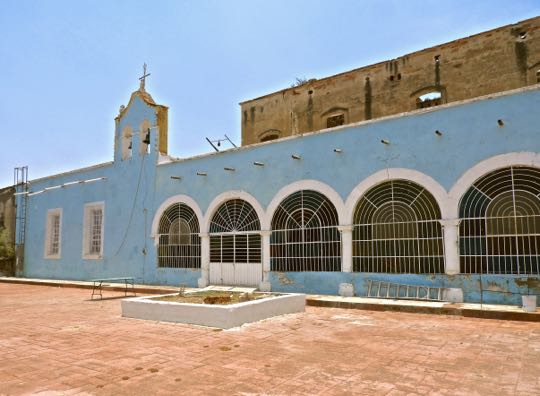 On the roof above the portales is a long rectangular structure set back from the front wall. This was once the living quarters of the hacendado (owner) and his family. Between the front of the hacendado's quarters and the casa grande's front wall is a broad terrace that acts as mirador (viewpoint). 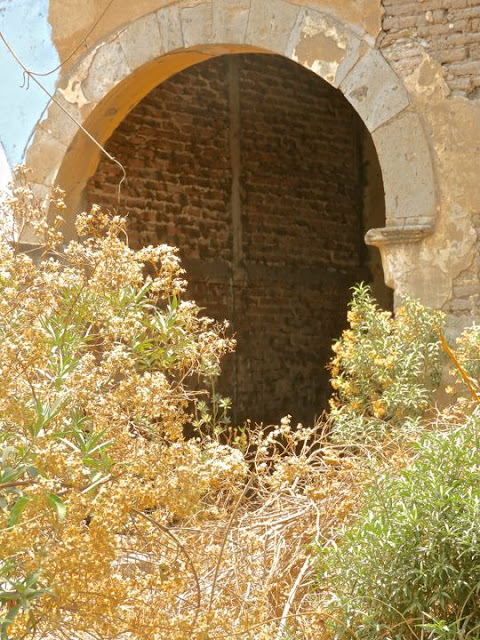 This brush-choked opening was once the casa grande's carriage entrance.
The gateway stands just to the right of the portales. Through it would have passed the carriages of visitors such as church dignitaries, government officials, and hacendados from neighboring estates. It has been nearly a century since prancing horses pulled one of those fancy carriages through this passage into the casa grande's courtyard. 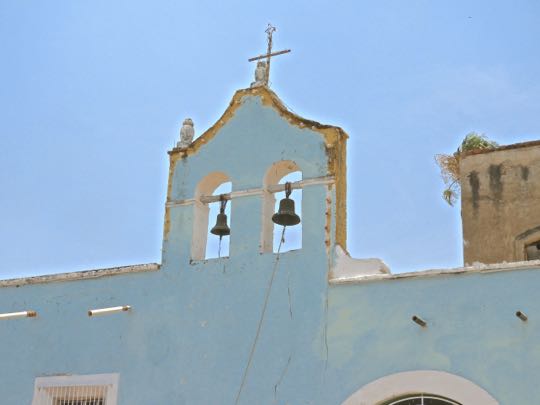 The campanario contains two bells. Pull-ropes show that they are still rung the old fashioned way. The right-hand bell has a date mark of 1910, the same year the Mexican Revolution erupted. The corner of the hacendado's quarters can be seen on the right. The capilla is attached to the casa grande and is entered from the left end of the arcade.

While many of the other structures of the casco have fallen into ruins, the residents of the pueblo have maintained the hacienda's old capilla as their church. A similar situation exists in many other pueblos which were formerly haciendas. 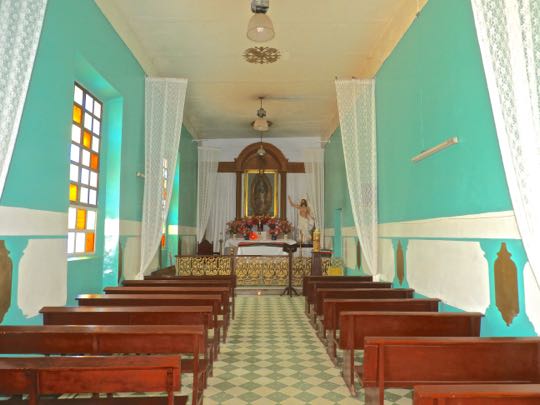 The nave of the capilla contains a few of its former decorations. The design on the ceiling between the two lights is a gold-plated emblem from the 19th century. The lower part of the walls on either side are lined with large white spaces alternating with gold, shield-shaped designs. It is likely that the white spaces once contained murals or other designs which have now been painted over. 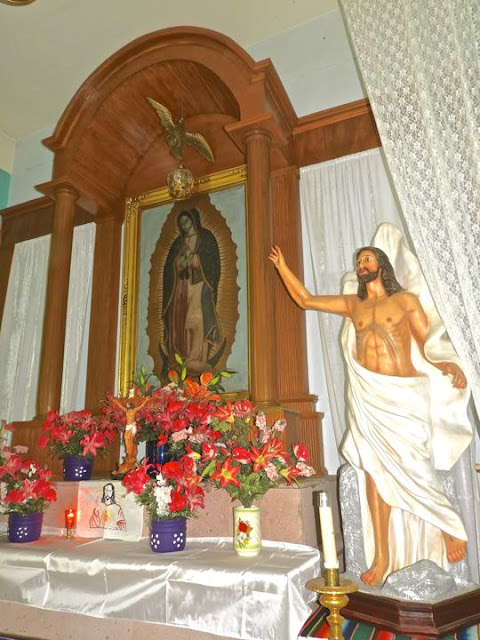 The altar area. A painting of the Virgen de Guadalupe hangs on the wall behind the altar. She is the patron of Mexico and especially its poor and indigenous people. Her image can be found throughout the country, from the simplest shrine to the grandest cathedral.

When we first arrived at the hacienda, the gate to the patio in front of the capilla and casa grande was locked. However, the arrival of a dozen foreigners in a small pueblo rarely goes unnoticed. After a few minutes, a man showed up with the key to the gate, followed by the elderly woman who is the capilla's caretaker. She very kindly opened the capilla for us and showed us around.


The mirador or lookout point 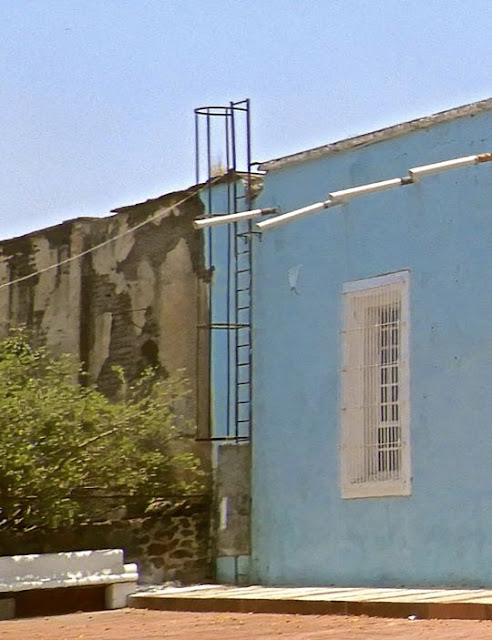 A rusty and somewhat rickety ladder is attached to one side of the capilla. Unfortunately, the caretaker was unable to provide access to the rest of the casa grande. However, my cousin's husband Gene quickly found a solution. I was a bit dubious about the ladder, but I gave it a try after he made it to the top. I made it safely to the roof, as did Jim B, who soon followed me.

The rest of our party remained safely on the ground, comfortably seated under the shade of a large tree. They followed our progress with great interest and I wondered if they were taking bets on which of us would tumble to the ground first. However, no such disaster occurred and our climb rewarded us handsomely. 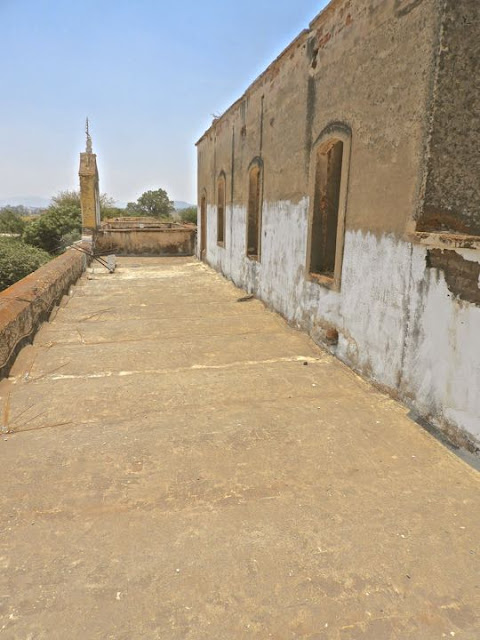 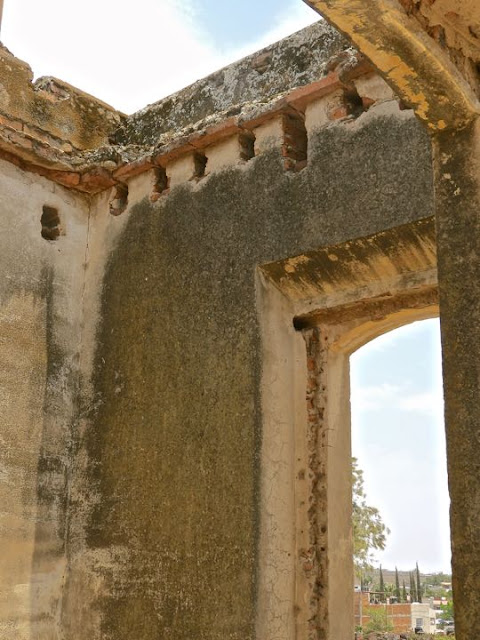 The hacendado's quarters are empty and roofless today. The vacant windows reminded me a bit of the eye sockets of a skull. A series of holes along the front wall shows where the rafters once supported the ceiling. The thick walls helped keep the rooms cool in the summer and warm in the winter. Because of the difference in style and construction materials, this structure appears to have been added at some time after the casa grande it was originally built. 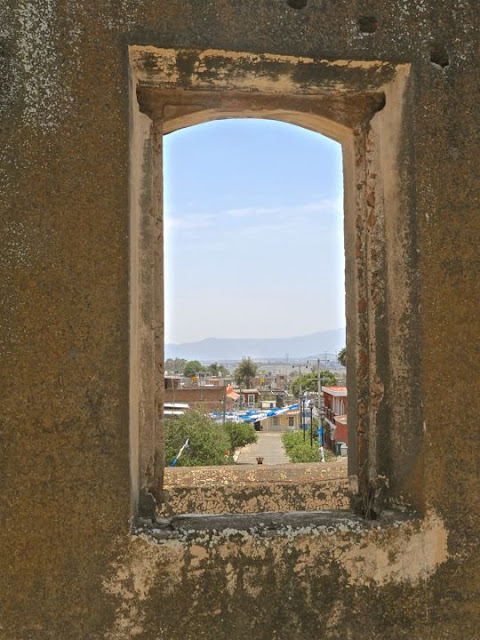 A tall narrow window looks out over the terrace and the pueblo beyond. A hundred years ago, you would have looked out over decorative gardens. Beyond them, broad fields of wheat and maiz (corn) would have spread out into the distance. Today, all this is covered by the pueblo. Lake Chapala lies beyond the range of mountains you can see in the distance on the far side of these. 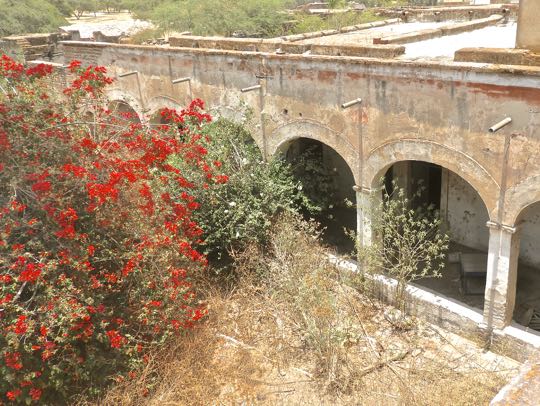 Portales line the south side of the courtyard. Several doors lead into rooms that were once used as offices, guest quarters, and storage. The large bush with the red flowers is a bougainvillea and it is the same bush seen in the satellite photo shown earlier in this posting. Bougainvillea grows all over this part of Mexico and blooms year-round. 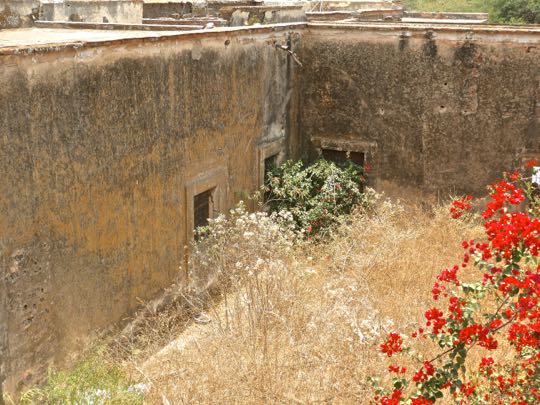 The other walls of the courtyard are blank, except for a handful of doors and windows. This shot was taken from the exact opposite position as the last one. The bougainvillea on the right is the same bush. Now wildly overgrown, the courtyard below would once have been the well-tended centerpiece of the casa grande. 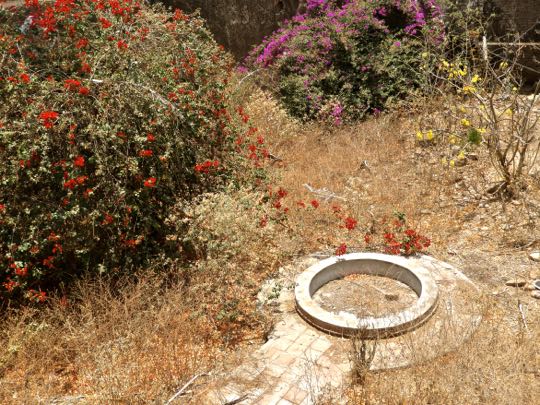 A stone walkway connects the portales with the ruins of an old fountain. Fountains are common features of haciendas. They are usually found in casa grande courtyards like the one above, but may also appear in front of the building's main entrance. In the early days, there was probably a well here. However, by the late 19th century, it had become a fountain to decorate the courtyard's garden.


The working areas: Bodegas and corrals 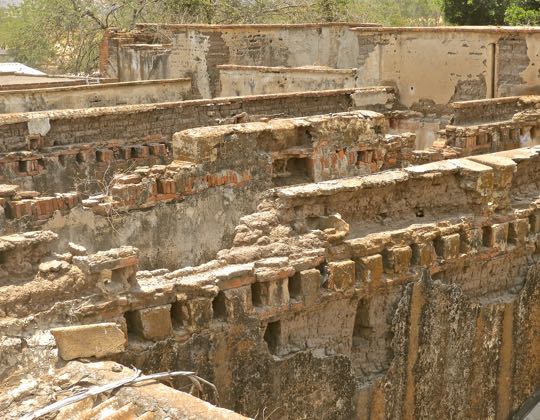 On the north side of the casa grande are a series of long parallel rooms. These would have functioned as work areas or for storing the products of the hacienda. Included in this area are the stables for the hacendado's horses. In the background, you can see part of the high wall that surrounded and protected the casco complex. 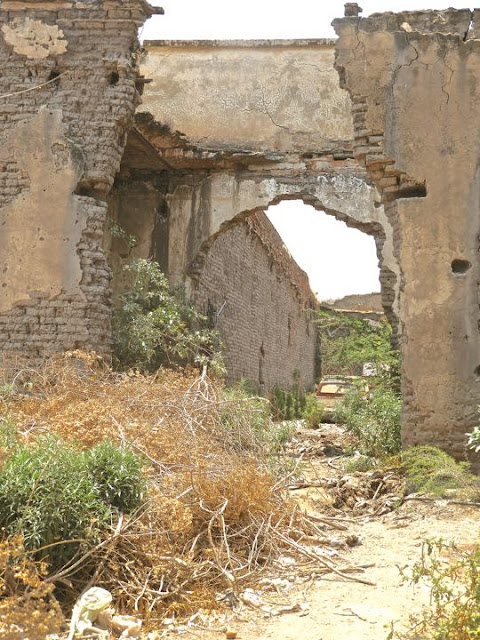 A large opening has been punched through the casco wall to the right of the casa grande. I believe the hole was created following the breakup of the hacienda after the Revolution. The opening appears to be for the movement of animals and vehicles in and out of a large corral. The photo provides a sense of the massive height of the old adobe wall--at least 7m (22 ft). 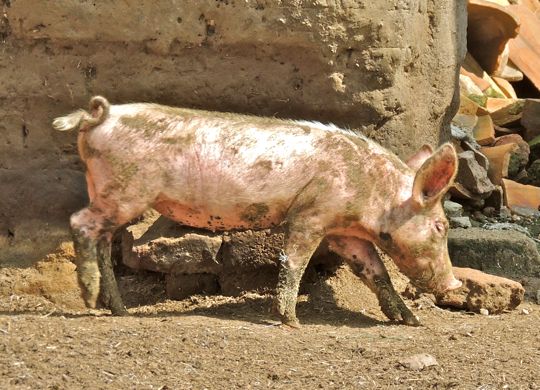 One of the critters living at Hacienda Vieja today. Although filthy, this young porker looks healthy enough. I found him rooting around the big hole in the wall seen in the previous photo. Today, the number of animals kept on the property is fairly small. When it was in full operation, there would have been thousands of cattle, horses, sheep, and pigs. 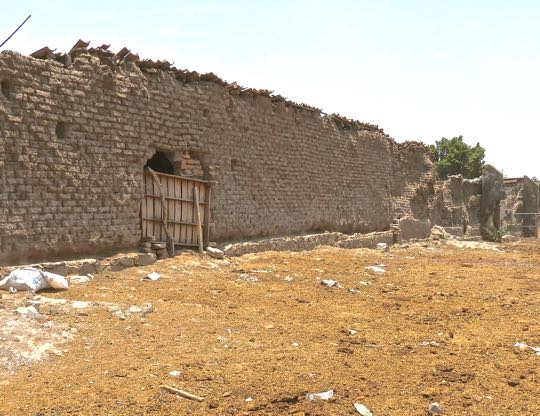 The back (east) wall of the casco. This section is also made of adobe brick. The part at the right of the photo is in disrepair. It might keep cattle in today, but in the old days, a wall in this condition wouldn't have discouraged bandits or other raiders. 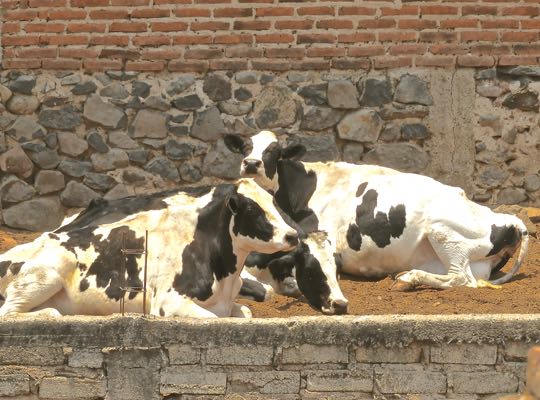 Several dairy cows relax in the cattle enclosure. The property within the old casco is privately owned, but the people who live in the pueblo rent space from the owner for their animals. 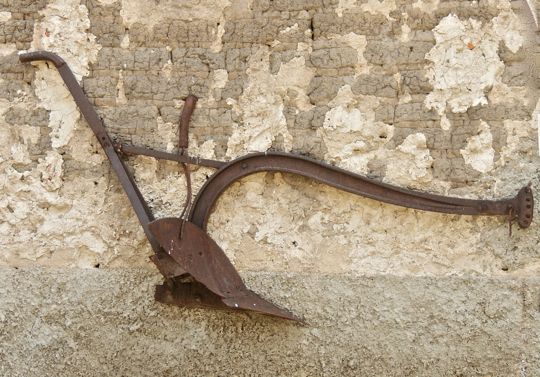 Iron plow of the type once used to prepare the ground for corn or wheat. The plowman would have walked behind, guiding the oxen pulling plow. Wheat and corn became economically important in the 18th century. As a result haciendas maintained large herds of oxen for plowing. While this sort of plow was widely used in the 19th century, those used in preceding centuries were made of wood, sometimes with an iron point. 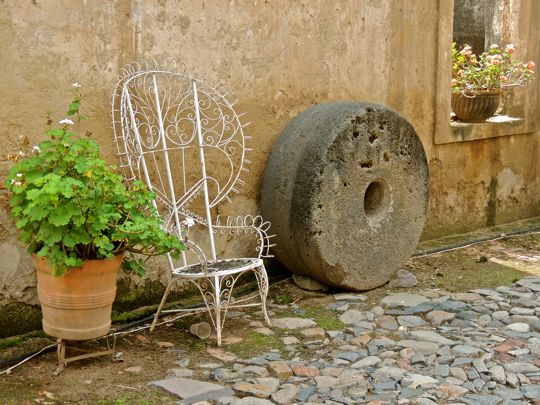 Stone wheel used in the grist mill. The hacienda would have ground its own wheat and corn using a wheel like this, probably powered by a burro or mule. 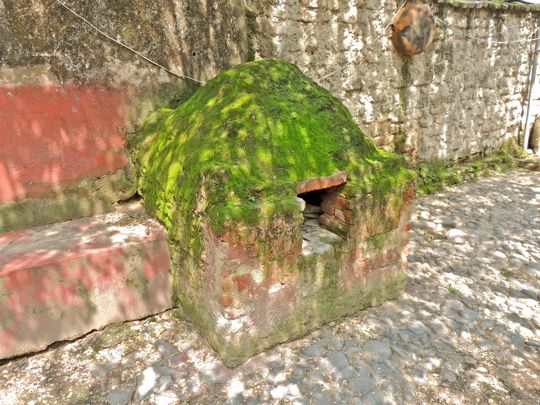 "Beehive" style baking oven. The oven gets its name from its shape. Once ground, the hacienda's wheat flour would have been formed into bread, cakes or pies and baked in this wood-fired oven. I have bought bread from a family in my neighborhood who bake it in an oven virtually identical to this one. Beehive ovens were developed in the Middle Ages in Europe. 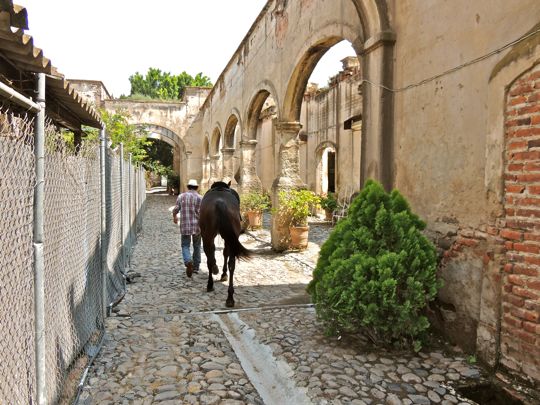 A young vaquero leads a horse back toward the stables. For centuries, hacendados have taken great pride in the quality of their horses. Up until the beginning of the 20th century, they were the primary means of transportation. Now, of course, the horses are purely for recreational use. The current owner has remodeled part of the old bodegas into a country home keeps his riding mounts in the stables. The house is to the right of the portales. 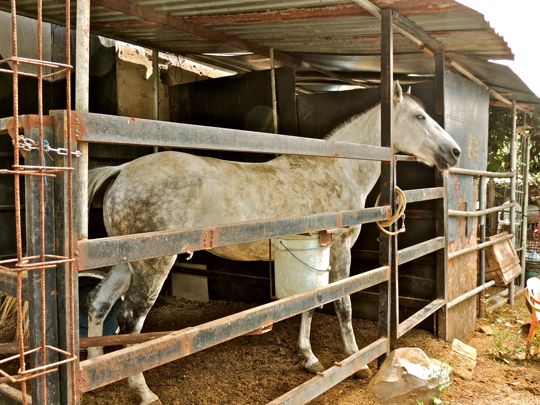 One of the beautiful horses we found in the stables. The vaquero let us follow him into the courtyard of the stable where we could watch as he groomed the animals. Unfortunately, we were unable to gain access to this area on our most recent visit, so I used these photos from the first. 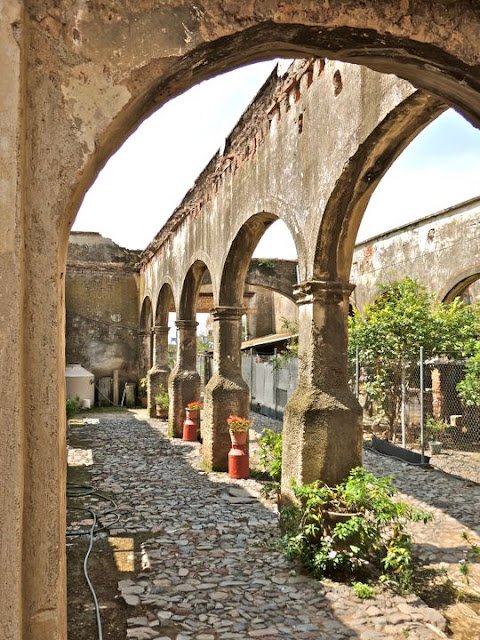 This area of the old hacienda was the most photogenic. Multiple passageways were lined with arches like those above. The floor of the stable area was attractively paved with cobblestones. Even in its semi-ruined condition, this part of the structure is very evocative of past centuries. 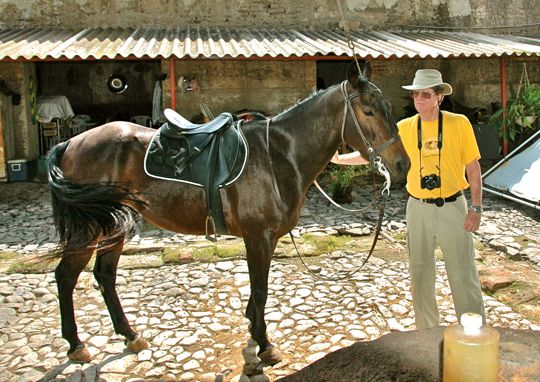 Making friends with one of the stable's residents. The vaquero saddled up this horse in preparation for its use by the hacendado or his family. The saddle appears to be English-style, rather than the traditional Mexican style. The major difference is in the lack of a pommel at the front of an English saddle.

This completes my posting on Hacienda Vieja del Castillo and of my three-part series on Exploring Old Jalisco. I hope you have enjoyed it and, if so, you will leave any thoughts or questions in the Comments section below, or email me directly. If you leave a question in the Comments section, please leave your email address so that I can respond.