One of several display rooms in Museo Doña Conchita Encarnación. This is San Sebastian del Oeste's only museum, but it is packed with fascinating objects, documents, and photos from the days when the pueblo was a silver mining boomtown. The private museum was created in 1995 by Doña Conchita Encarnación, who ran it until 2009. Since then, it has been managed by her charming daughter, Maria Guadalupe Bermúdez Encarnación, who goes by the nickname "Lupita". Her family has been prominent in San Sebastian since the 18th century. (Photo from the website Sistema de Información Mexico) 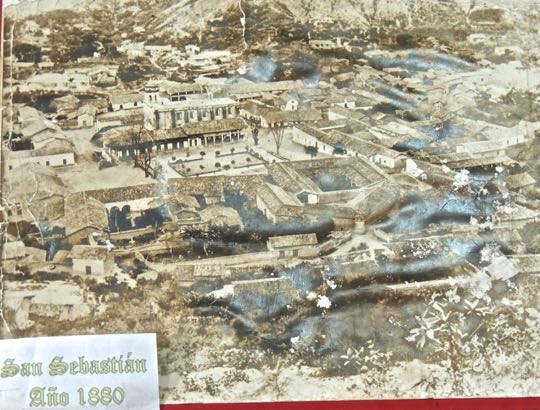 Photo of San Sebastian, looking north, as it appeared in 1880. The rectangular Plaza Publica, bordered by trees, can be seen in the upper left quadrant. El Portal Morelos fills its north side. The museum is located to the east side of the plaza. The Encarnación family's history in San Sebastian began in 1770. That year, the first member of the family arrived from Spain to become the manager of the Santa Gertrudis mine. The house containing the museum was constructed in 1774, the same year as the Plaza Publica. It originally served as the office and home of the mine manager.  However, the land on which the house sits was once part of a hacienda that had been founded the previous century. 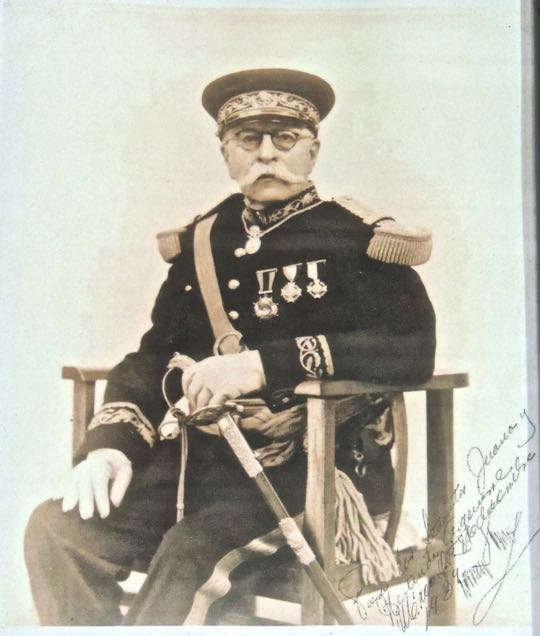 General Amado Aguirre Santiago was a highly decorated soldier and politician. He was born in San Sebastian in 1863 into the Aguirre family who, along with the Sánchez and Encarnación families, were  the wealthiest and most illustrious people of the town. The three families came to an agreement to intermarry only among themselves in order to avoid diluting their pure Spanish blood.
This arrangement grew out of the rigid social hierarchy of colonial New Spain which continued into the early 20th century.  The goal was to keep pure-bred Spaniards on top. The result of the three families' agreement has been a complicated and rather astonishing set of relationships.
Lupita's mother, Conchita Encarnación, was not only the wife of Lupita's father, but his aunt and cousin. Lupita's father was also her nephew, cousin, and uncle! These head-spinning relationships reminded me of the old Dennis Warner song "I am my own grandpa". 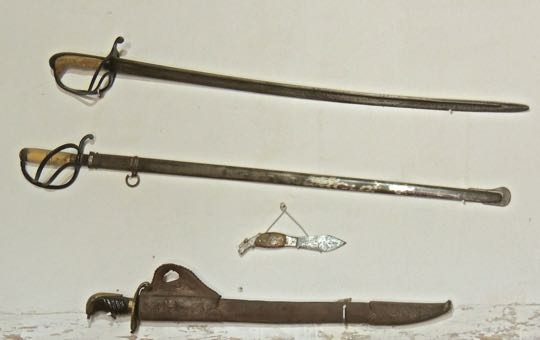 Some of the family cutlery, probably belonging to General Aguirre. Before the Mexican Revolution, Aguirre worked as a mining engineer for the first half of his life, but the rest of it was otherwise occupied. During the Revolution of 1910, he served under General Álvaro Obregón, who later became President of Mexico. General Aguirre's military posts included commander of Guadalajara, as well as governor and military commander of Quintana Roo and later of Baja California.
His civilian positions included constituent deputy, member of the Senate, Under Secretary of Agriculture and Development, Secretary of Communications and Public Works, and Ambassador to Chile, Brazil, and Costa Rica. This includes only some of his amazing resume! San Sebastian del Oeste has honored General Aguirre by naming its main street after him. 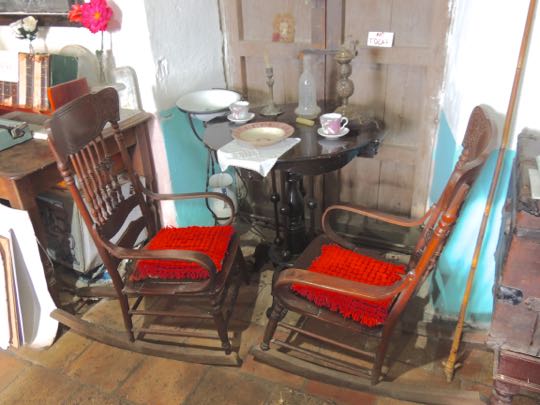 Rocking chairs and other furnishings of the old house. The fine china on the table is typical of the sumptuous lifestyle enjoyed by the families of mine owners. Behind the table is a stand holding a small wash basin and a pitcher. In the 19th century, stands like this provided a way to wash up when indoor plumbing was absent. 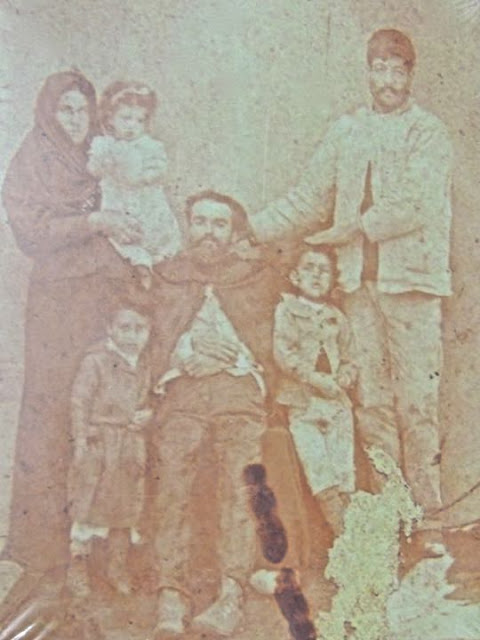 A dead father is surrounded by his loving family. Photos like this were a 19th century tradition. The custom in San Sebastian was for the strongest men in the community to carry the body to the family porch and place it in a seated position. The eyelids were sometimes painted to give the appearance of life. The family would then gather around for a last photo before the body was put in a coffin and buried. It is probable that some of our modern customs associated with death would seem equally bizarre to a 19th century family. 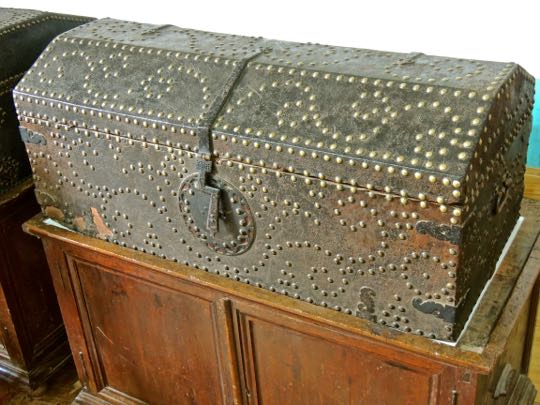 Elaborately-studded chest from Spain. Long voyages and rough handling required that chests like this be strongly made. Notice the heavy lock, a requirement for security against thieves. Such chests could be used after arrival for storage of clothing and valuable items. 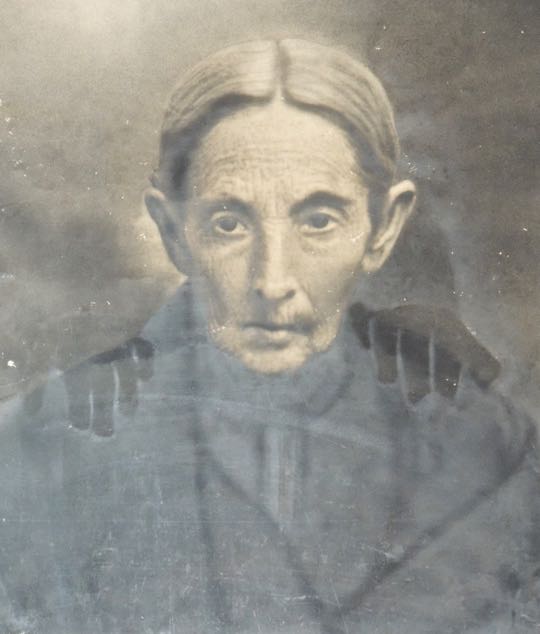 An eerie photo of Lupita's Great-Great-Grandmother Andrea. She arrived from Spain in 1777 as a young girl. The photo was taken when she was an old woman, many years later. It was not until I downloaded the picture from my camera into my computer's photo program that I was able to look closely at it. I was startled to see the two ghostly hands resting on Andrea's shoulders. There was no sign with the photo and I have no idea how this occurred.
Mining Life 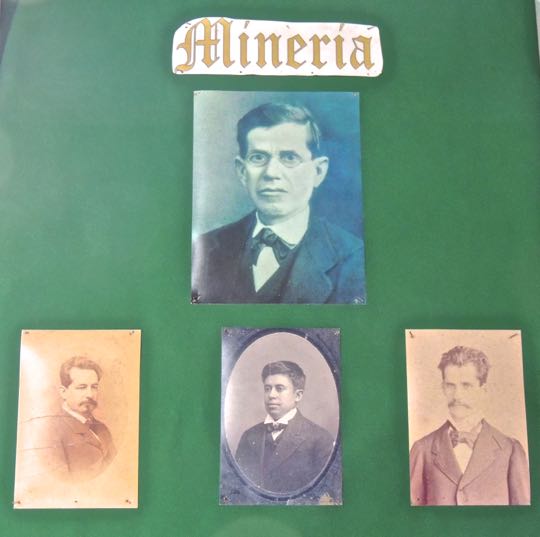 Various members of the three families were engaged in the mining business. Some who worked directly in the business are shown above. These men would have been engineers and managers of their families' holdings. The attire of these men indicates that they lived in the 19th century. The first photographs in Mexico were taken only six months after the daguerreotype had been invented in 1839. However, photography did not become widespread in Mexico until the period of the French Intervention (1862-1867). 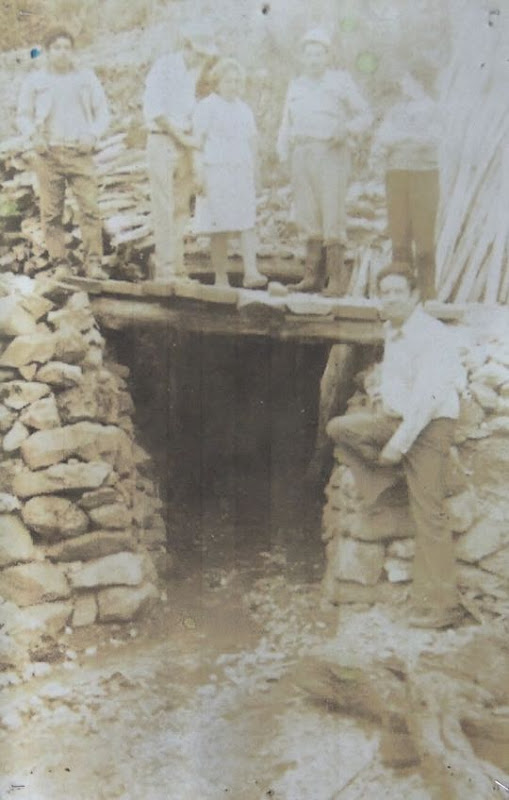 Entrance of one of the silver mines. The structure doesn't look terribly stable or sophisticated to me, but apparently it served its purpose. By 1785, at least 25 mines were operating around San Sebastian. The most important included Santa Gertrudis, Real de Oxtotipan, Los Reyes, Terronera, and La Quiteria. The office for Santa Gertrudis was located in what is now the museum. La Quiteria was operated by Hacienda Jalisco (see Part 2 of this series). 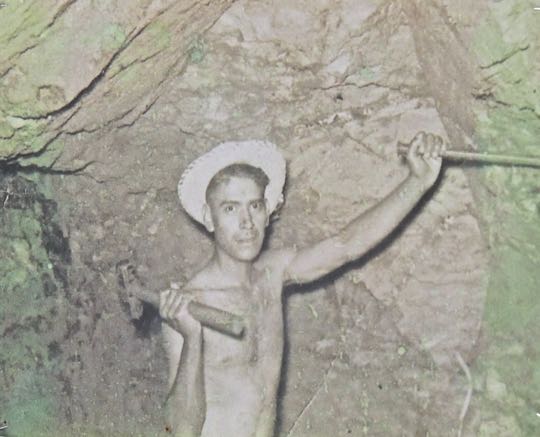 A mine worker drives a hole for explosives. The technology was pretty simple: a pointed iron bar and a sledge hammer. The life of a mine worker was difficult and dangerous, to say the least. He might start work before daylight and not emerge from the mine's mouth until long after sunset. His tools were the opposite of "labor-saving". His pay was better in the 17th century, when labor was scarce, but worsened toward the end of the 18th century, as the population increased. Low pay and poor working conditions in the mines were important factors leading to both  the War of Independence against Spain and the Revolution.
Dangerous working conditions included mine dust, which could damage men's lungs, and tunnel collapses. The explosives used were sometimes unstable. Those who processed the ore faced a more insidious danger: mercury poisoning. Little was known of its toxicity until the last half of the 19th century. During the colonial period alone, Spain exported 50,000 tons of mercury to New Spain for silver processing. Two to four pounds of mercury were used to leach out one pound of silver from the ore. After 400 years of using the mercury process, the land around some old mining sites is still heavily contaminated. 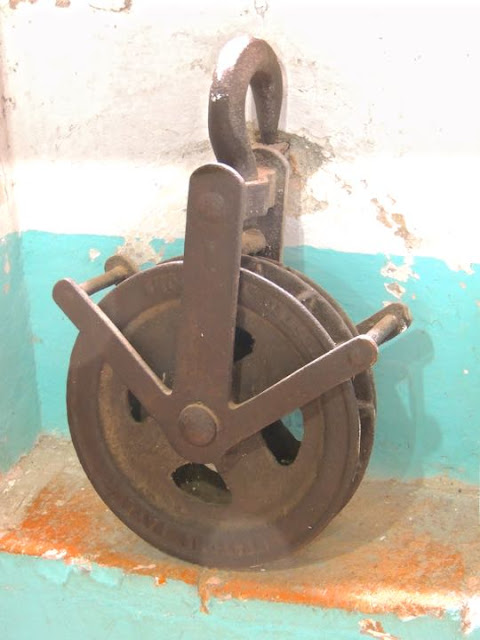 Old mining pulley. Pulleys were first used to raise water from wells in 1500 BC in Mesopotamia. A device like this can allow a man to lift more weight than he could with simple muscle power. Several pulleys can be set up in an arrangement called a block and tackle which allows a single man to lift several times his own weight.
However, in the early days of mining, human labor was cheaper and more available than mechanical devices. At the end of their shift, workers simply loaded a hundred pound sack of ore onto their shoulders and walked it out of the mine. This might involve climbing hand-over-hand up several levels on rickety wooden ladders. 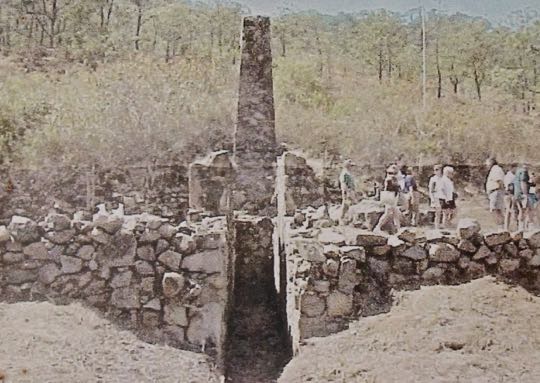 Remains of a furnace and chimney for processing silver. These ruins are similar to the furnace and chimney at Hacienda Jalisco, seen in Part 2 of this series. After the ore was removed from a mine, it was transported to one of several processing centers operated by mining haciendas. There, it was crushed and spread out in what is called the patio process. Mercury amalgamated with silver particles when it was poured over the crushed ore.
This amalgamation would then be put into the furnaces where the mercury would burn off, leaving the silver to be collected and poured into molds for silver ingots. The mercury-soaked debris was then removed from the patios and dumped. This contaminated the soil and eventually the streams. The amalgamated mercury that burned off was carried away in smoke which was then breathed in by those in the surrounding area. 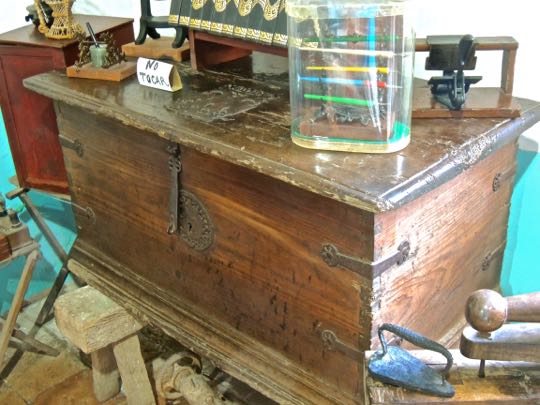 Wooden chest in which silver ingots were once stored. The silver ingots were transported in wooden chests from the processing centers to a building near the plaza. From there, they would be hauled by mule trains or by two-wheeled ox carts called carretas. The long journey to Spain followed the Camino Real (Royal Road) to Guadalajara, Mexico City, and the Gulf port of Vera Cruz. 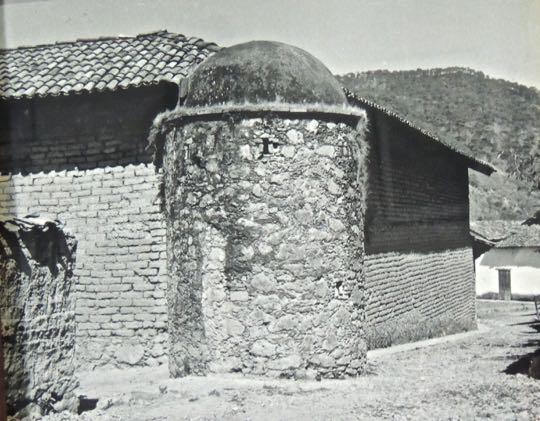 Corner bastion protecting a silver storage warehouse. Bandit raids were always a risk in silver mining towns. Once the silver was processed into ingots, it was stored in this adobe building. The old photo above shows one of the cylindrical bastions located at the corners of building like this. There are gun slits at regular intervals just below the domed roof. The slits are situated so that riflemen inside can cover the exterior walls on either side of the bastion, as well as firing at attackers approaching directly. 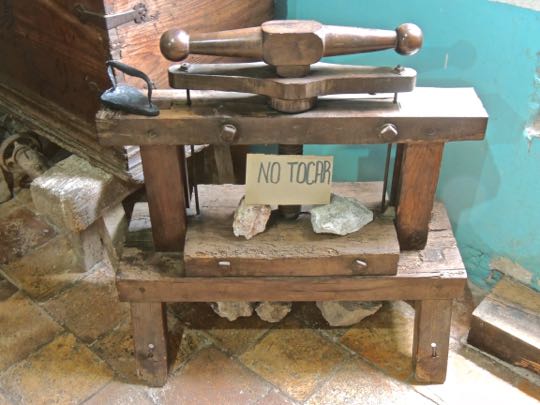 Press for printing paper script used to pay mine workers. Ironically, for all the rich hoard of silver shipped out of San Sebastian, actual silver coinage was scarce. As a result, the mine workers were often paid with script redeemable for goods in local stores. Not surprisingly, the stores were often owned by the same people who controlled the mines.
This completes Part 5 of my San Sebastian del Oeste series. I hope you have enjoyed it. If so, please leave any thoughts or questions in the Comments section below or email me directly.
If you leave a question in the Comments section, PLEASE leave your email address so that I can respond.
Hasta luego, Jim
Posted by Jim Cook at 6:58 PM No comments: