Mahahual could be "Margaritaville" for real! 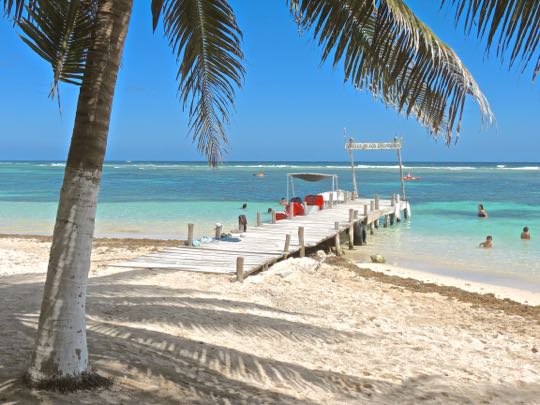 The "Pier of the Bucaneers" stretches out into turquoise water. Surf breaks over a distant reef as kayakers and swimmers enjoy the warm and colorful waters. This long, beautiful beach can be found at Mahahual, on the Yucatan Peninsula's Caribbean Coast. Recently, the news has been full of Polar Vortex stories and the horrors of blizzards and sub-zero temperatures in Canada and the northern US. I decided that I should dedicate this posting to all those who are shivering up there in the Land of Ice and Snow.

During our visit to the southeastern region of the Yucatan Peninsula, Carole and I stopped by the little beach town of Mahahual. It is located about two hours drive north of Chetumal, the capital of the Mexican state of Quintana Roo. Until fairly recently, Mahahual was a fishing village, remote and sleepy. Then it was discovered by young backpackers and sailboat enthusiasts, who enjoyed its laid-back atmosphere as well as snorkeling and scuba diving in the pristine water. As usual, word spread.

Mahahual became ever more popular to those seeking an off-the-beaten-track beach experience. Eventually (some would say unfortunately), the people with money noticed it. Then, the cruise industry built a dock and big ships began to tie up here. Fortunately, none were in port on the day we visited, so the scene was fairly calm and sedate. To find Mahahual on a Google map, click here. 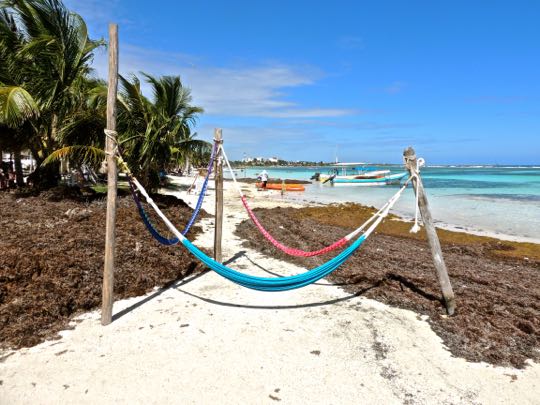 Three hammocks form a triangle between pilings driven into the sand.  This takes "hanging out together" to a whole new level. Mahahual feels like the laid-back Mexican beach paradise in Jimmy Buffet's famous song. The brown piles are dried, raked-up seaweed waiting for removal. In this shot you are looking north. 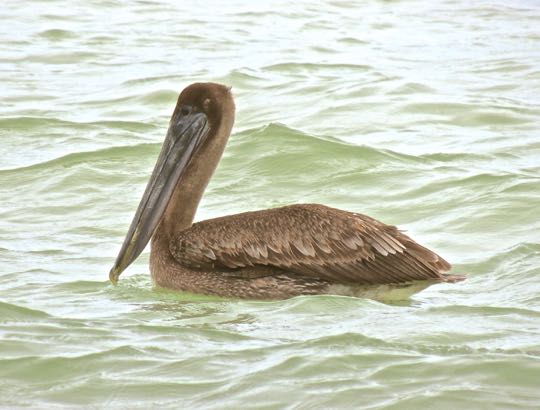 Just off shore, a Brown Pelican paddles quietly by. These large seabirds outnumber other birds along the shore. Eastern brown pelicans (Pelecanus occidentalis carolinus) inhabit the Caribbean Coast from Belize to Cancun, Mexico, as well as all around the Gulf Coast from northern Yucatan to Texas. It was listed as an endangered species in 1970, but has largely recovered. These birds are stately while paddling through the water and graceful while soaring over the waves. However, it's hard to keep a smile off your face while watching them move about on shore, doing their Charlie Chaplin waddle. 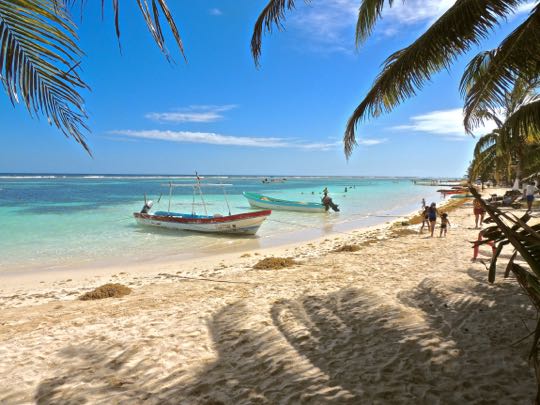 Shadows of overhanging palms reach toward the shore as fishing boats rock gently in the shallows. The view here is toward the south. The white line along the horizon is the Great Maya Reef, also known as  the Mesoamerican Barrier Reef System. It stretches 1000 km (620 mi) along the Caribbean shore from the northern tip of the Yucatan Peninsula all the way down to Honduras. Because of the protection it provides from ocean swells, the water along the shore is calm. This makes the area between the shore and the reef ideal for swimming and snorkeling. 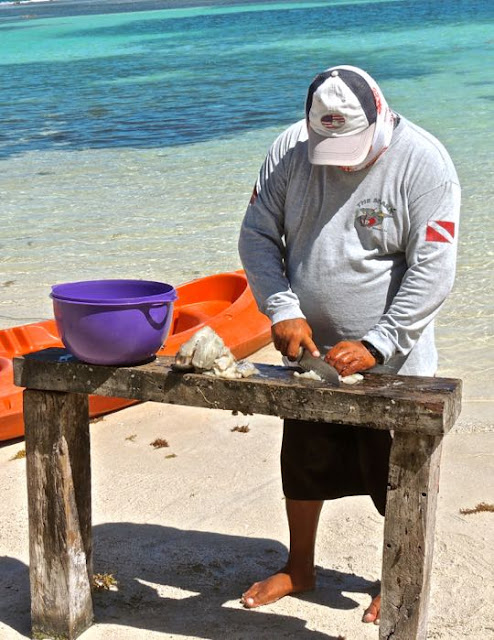 A fisherman cuts up his catch of the day. One nice thing about hanging out in a fishing pueblo is the ready availability of really fresh seafood. The catch could include Tarpon, Snook, Bonefish, Jack and many others. Charter services are available to take you out on a boat, or you could spearfish using a snorkel (tanks are not allowed for this). If you are not inclined to work that hard, you could buy your dinner from a local fisherman and cook it yourself. Still too much work? Try one of the many seafood restaurants in town. 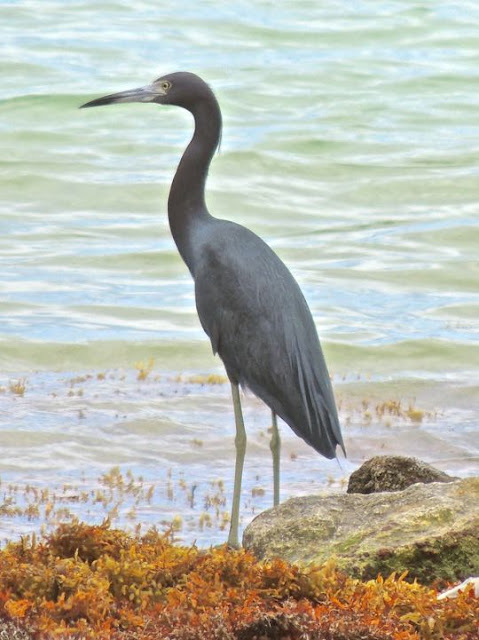 A Little Blue Heron stands a the water's edge, watching for its next meal. The diet of Egretta caerulea includes fish, frogs, crustaceans, small rodents, and insects. These birds are snow white during their first year, after which their feathers begin to change. They breed in the Gulf Coast area of the US and the eastern coast of South America. 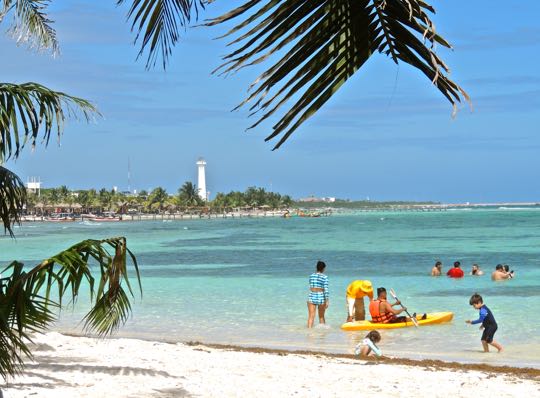 A kayaker sets out as children and adults play in the shallows. A tall white lighthouse stands on a point in the distance. Its light and foghorn will warn ships against getting too close to the offshore reef. To the right of the lighthouse, in the distance, are the cruise ship docks, located about 3km (1.9mi) north of town. If you want to avoid the crowds by finding the days of the week when they are not in port, check out this link. 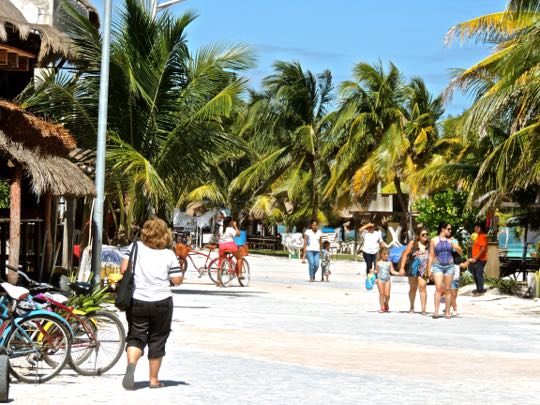 Mahahual's Malecon is a broad walkway along the shoreline. One side is lined with groves of palms and the beach. On the other are hotels, restaurants, cantinas, and various shops. The Malecon is one of Mahahual's fairly recent improvements. It not only provides all kinds of services to visitors but lots of employment for local people. 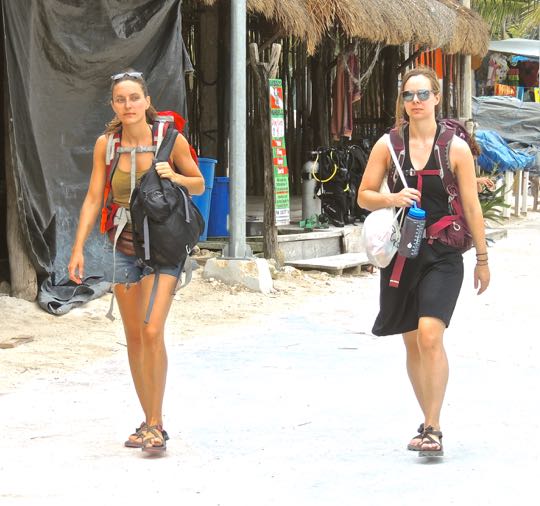 A pair of young backpackers strolls past a dive shop. Carole and I have noticed that many of the foreigners we encounter on the Peninsula are young backpackers. Many of these come from Britain, France, Germany, Denmark and Italy. Others come from the US or Canada or other Latin American countries. Mahahual has quite a variety of inexpensive hostels where they can stay, as well as camping areas. Compared to Europe, the Yucatan Peninsula is very inexpensive and it has a reputation as one of the safest areas in Mexico. 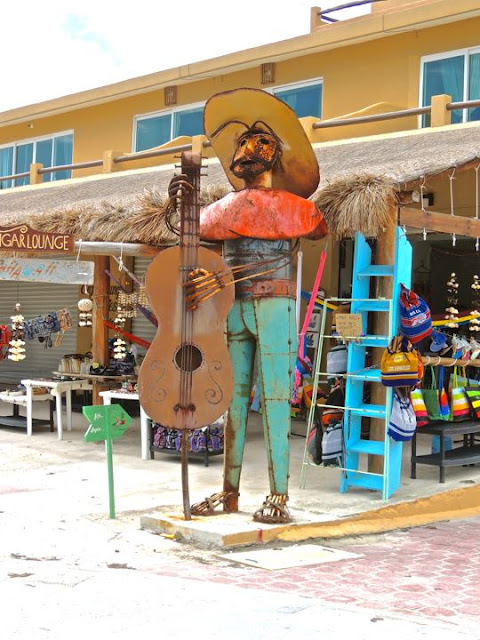 A large guitarist stands outside a popular local bar. The Maha Sand Bar and Cigar Lounge is one of many off-beat eating and drinking establishments you will find along the Malecon. 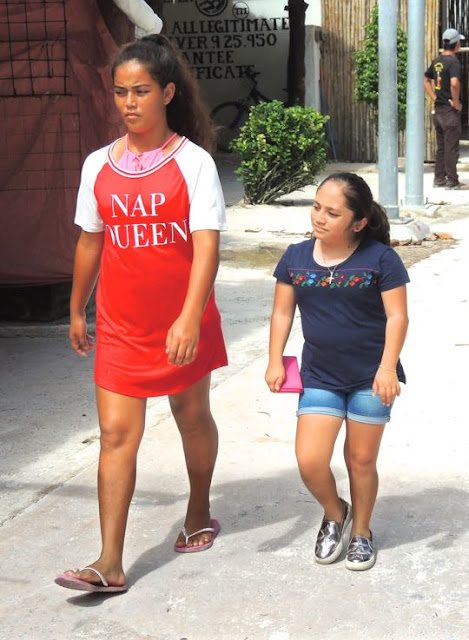 The "Nap Queen", accompanied by her diminutive friend. I couldn't resist a photo of this pair, particularly because of the message on her chest. The pair reminded me of the old comic strip characters, "Mutt and Jeff", with one very tall and the other unusually short. 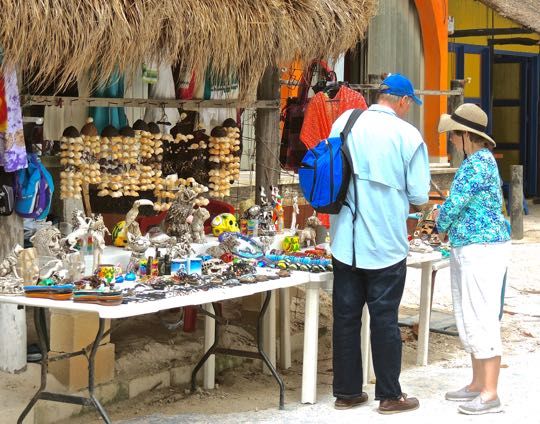 A knick-knack stand attracts a couple of older foreigners. Little shops like this are a standard feature of any beach town in Mexico. Much of the stuff is cheaply made junk, but you can occasionally find some inexpensive little treasures.


Accommodations to fit any budget 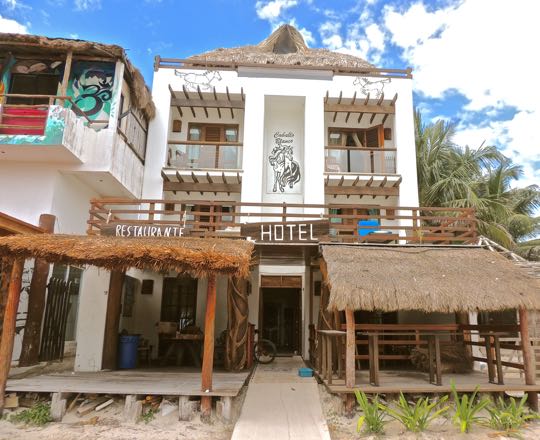 Hotel Caballo Blanco faces the beach across the Malecon. The hotel is definitely upscale, with a bar and a swimming pool on its roof and a stunning view of the town and the ocean. It even has its own 24-hour pharmacy, in case you come down with "turista" during your visit. Be advised that the Caballo Blanco needs to be booked quite a bit in advance. 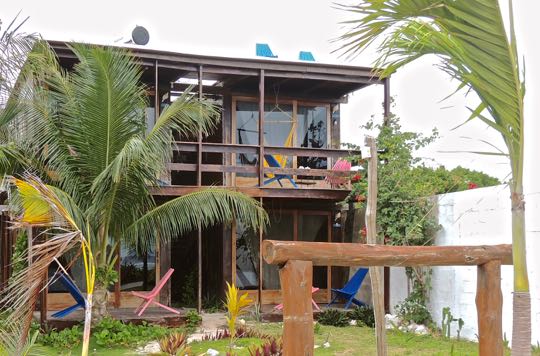 This place had no sign, so I'm not sure if it's a hotel or an apartment. The absence of a sign doesn't necessarily mean anything in Mexico. It looked nice and casual though, and has at least four rental units. 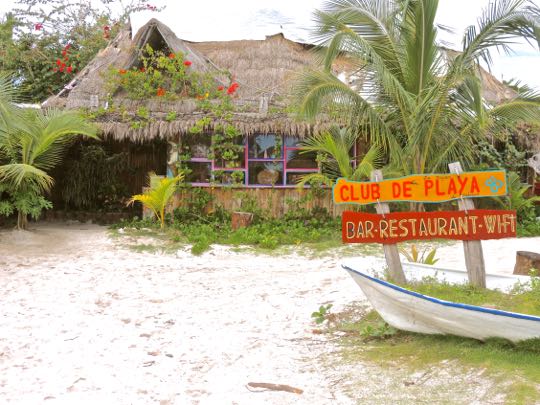 Club de Playa is an Eco-Hotel with a bar and restaurant. Exactly what "eco-hotel" meant was not clear to me when we came by. It looked fun and funky, though. Like most places in Mexico that cater to tourists, it has WiFi. 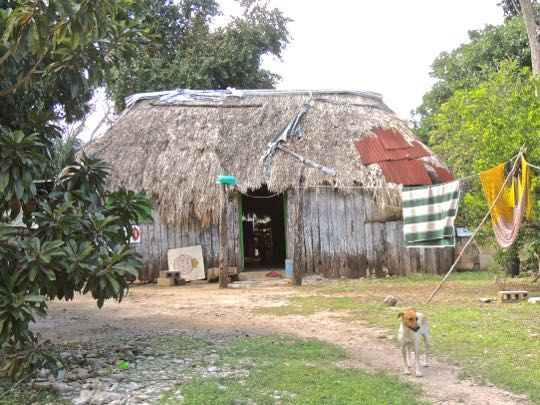 And then there was this place. Those who want to try out traditional Maya accommodations might check this place out. By "traditional" I mean literally back to 300 AD, or so. I'm not sure what the rent would be, but I'm guessing pretty low. No extra charge for the dog, I assume.

Fun in the water 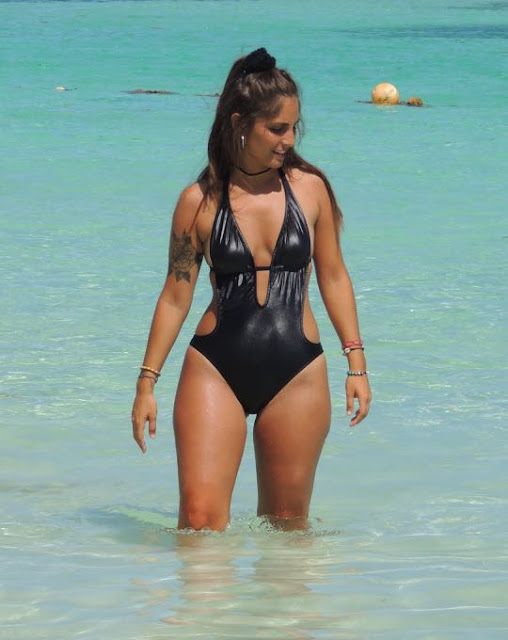 Swimming in the shallows is a popular option. This very photogenic young woman was watching her dog romp through the water when I snapped the shot. Those who are young and single are likely to find many others of a similar persuasion. 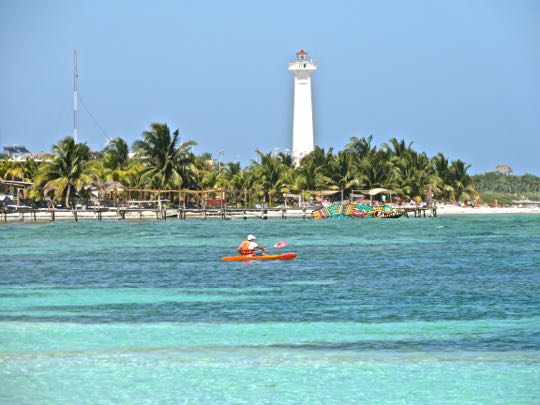 Kayaking is very popular here. The water inside the reef is relatively calm, so novices can try it out in relative safety. Many beach clubs will rent you a kayak, or provide one free if you are a patron. One popular type of kayak has a transparent bottom so you can observe the sea life as you glide along. 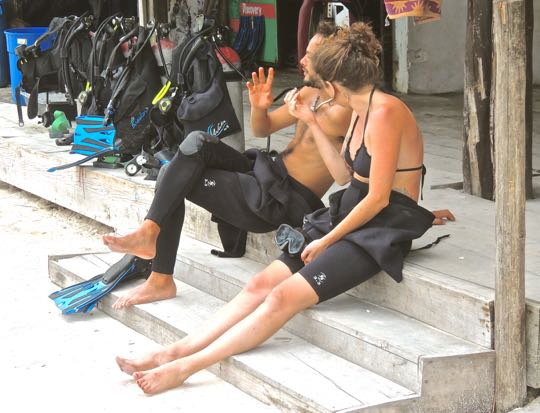 A couple relives their underwater experience on the steps of a dive shop. The Great Mayan Reef provides a variety of areas where divers can enjoy an underwater adventure, including a visit to a sunken 17th century Dutch galleon with 16 cannons still visible out of its original 40. 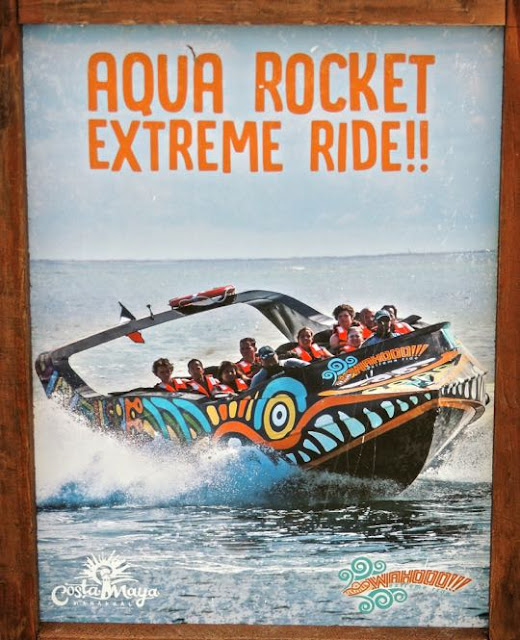 The Wahoo Aqua Rocket Extreme Ride is for those seeking an adrenaline high. We didn't have time for it, but we saw the docked boat. Even tied up, it looked like it was going full-tilt-boogie. 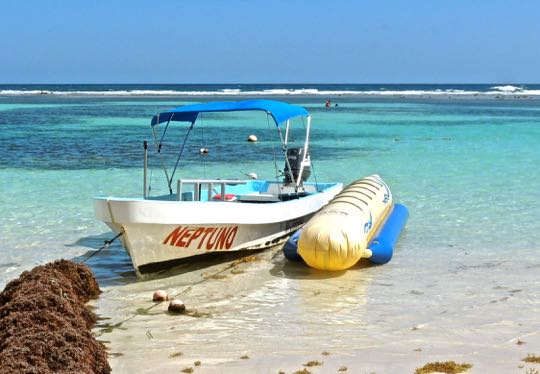 Riding a banana tube is not quite as wild, but it still gives people a thrill. Riders sit astride the tube with their feet on the blue foot-rests while hanging on to a strap in front of them. When towed by the boat, the tube doesn't reach the speed of the Aqua Rocket, but it still moves along pretty rapidly. In choppy water, some riders inevitably get tossed off, which adds to the experience.

Things to do out of the water 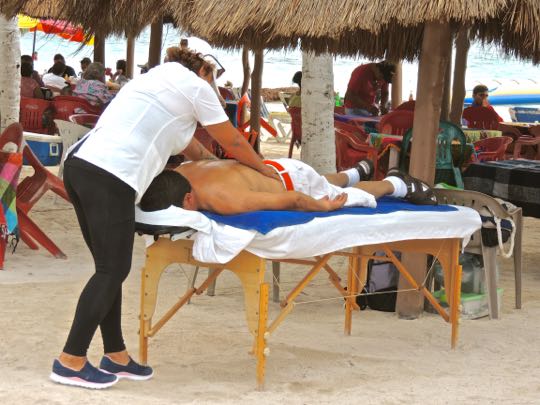 Get a relaxing massage under a palapa on the beach. There are numerous places along the Malecon where you and stretch out and have someone loosen up all those tight muscles you got on your long drive to the beach. Or, perhaps, the ones that tightened up on you during your Aqua Rocket ride. 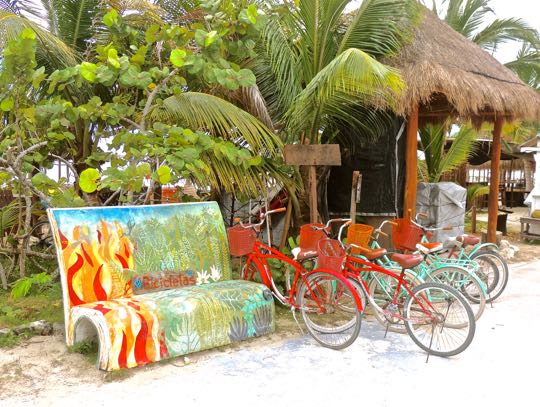 Rent a bicycle to explore the town. Carole and I are walkers, and we pretty much stuck to the Malecon and the beach, so we didn't feel the need for a bicycle. However, for someone who wants to explore more of the town and the area around it, this inexpensive mode of transportation is available. 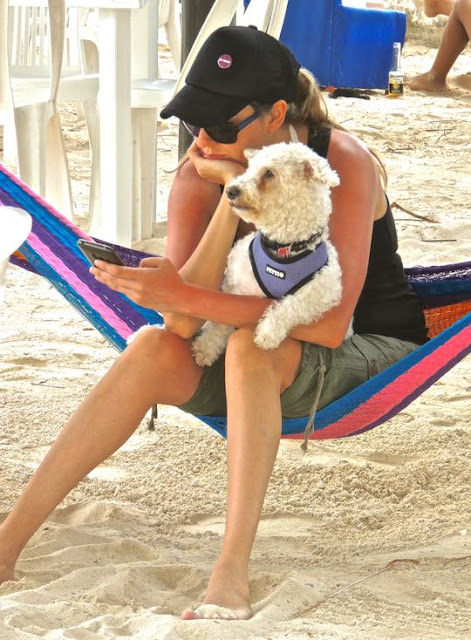 Hang out in your hammock while sending beach photos to your snow-bound friends. If you listen closely, you can hear them gnash their teeth even at the distance of a couple of thousand miles. The pup seems as laid-back as its owner. 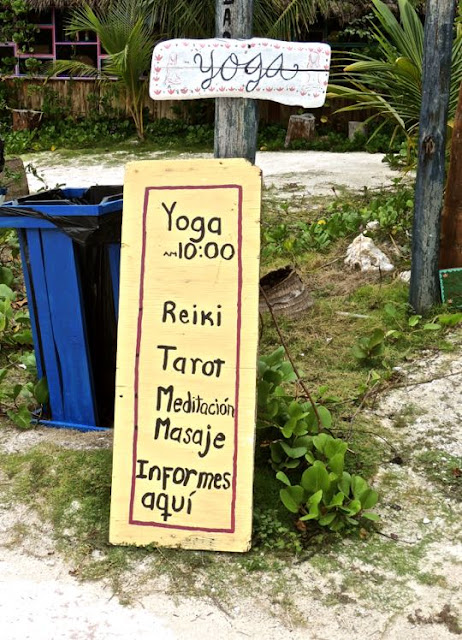 Try this place for full-service sublimity. Here, you can experience just about everything you need to get your inner groove going: yoga, massage, tarot readings, and meditation. And this is definitely not the only place of its kind in Mahahual. 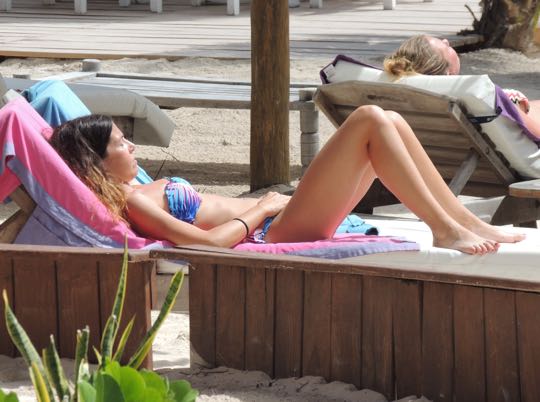 Or, lay back with your eyes closed, while bathed with balmy breezes. Sometimes, the best way to spend your time here is to do absolutely nothing. Perhaps Jimmy Buffet described it best in his song: "Wastin' away again in Margaritaville..."

This completes my posting on Mahahual. I hope you enjoyed it and, if so, that you will leave any comments or questions in the Comments section below or email me directly. If you leave a question, PLEASE include your email address so that I can respond.