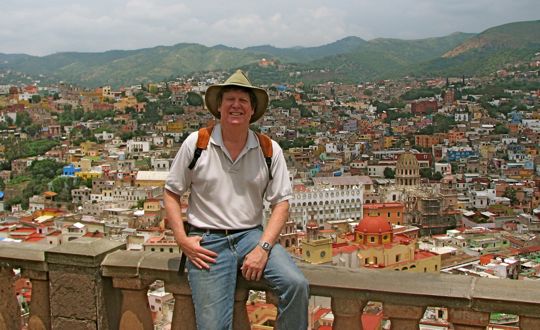 Hola amigos! Bienvenidos a Guanajuato! Carole and I recently returned from the Colonial city of Guanajuato, a World Heritage site about 4 ½ hours from our home in Ajijic. The city of Guanajuato winds through deep mountain canyons in the Mexican state of Guanajuato, only about a 1 hour drive west of San Miguel Allende,. To get there we drove almost entirely on 4-lane divided highway, most of it on scenic and well-maintained cuotas (toll-roads).

As with our trip to San Miguel Allende, I was overwhelmed with my opportunities to photograph this wonderful city. I have decided follow the same procedure as with my San Miguel postings and divide my Guanajuato photos in several parts which I will publish one part per week. I hope you enjoy the photos and commentary as much as enjoy providing it. 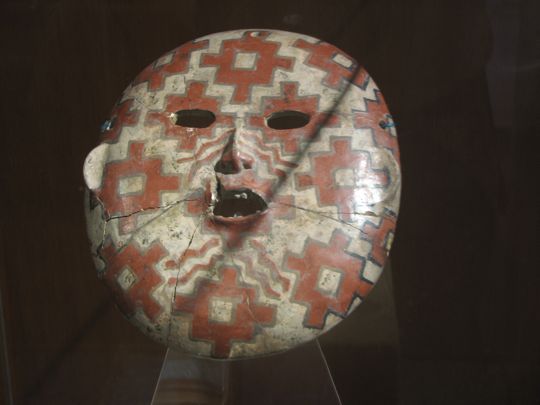 Pre-hispanic mosaic mask. Like many place names in Mexico, the Spanish couldn’t pronounce the original Purepechan name Quanax-juato, which means “Hilly Place of the Frogs”. Inhabitants of the city are nicknamed Las Ranas (Spanish for “the Frogs”). The mask above and the other artifacts shown below are displayed in the museum of the Alhondiga de Granaditas in Guanajuato. 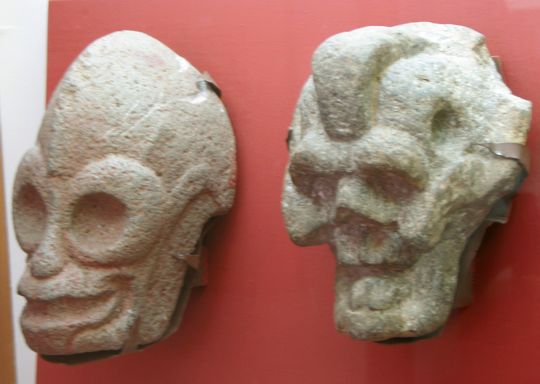 Stone skulls show the fascination with death shared by many pre-hispanic cultures. The traditional Mexican Day of the Dead may be a continuation of this. 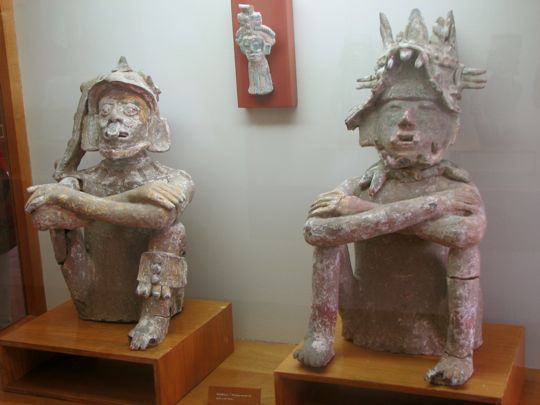 Seated figures take very realistic poses. Various Indio tribes inhabited the area over the centuries. These included the Otomi, other groups speaking Nahua (the language of the Aztecs), and the Chupicuaro, known as the people of the Cielo Azul (blue sky). 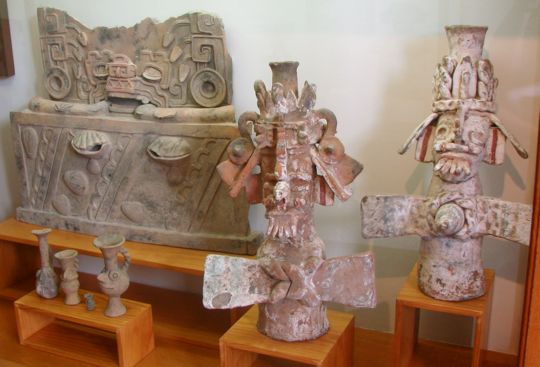 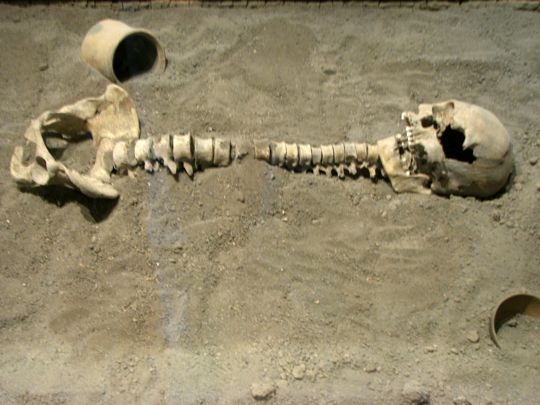 Skeleton, as it was found in the area. 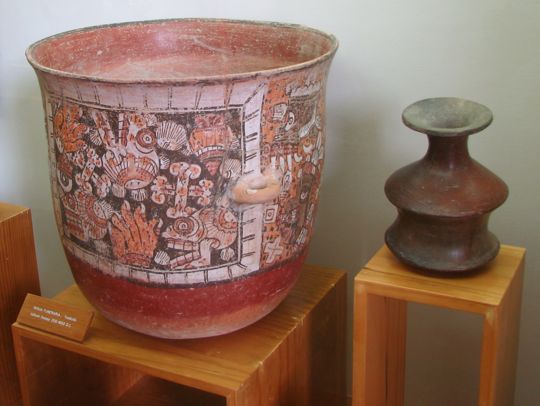 Beautifully painted funerary urn. This is an example of the fine pottery work by the native people of Mexico at the time of the Conquest. 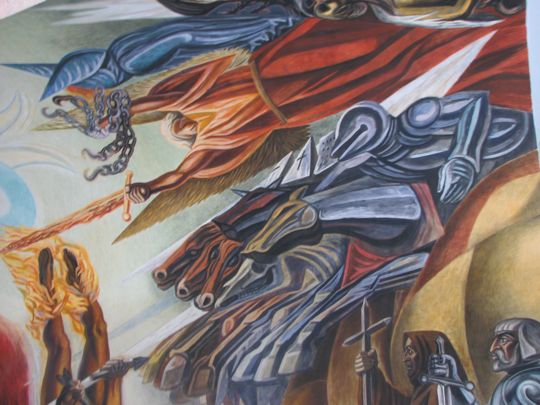 Spanish knights conquer Indio warriors. Guanajuato was one of the earliest areas settled by the Spanish, beginning in 1541. Horses, steel weapons, and armor enabled small numbers of Spanish to defeat the much larger armies of their Indio opponents. The painting above, and most of those below, are part of a large mural by Chavez Morado in the museum of the Alhondigas de Granaditas. Notice the two figures on the lower right, one representing the Church and one the Conquistadors. It is no coincidence that the priest's cross and the hilt of the knight's sword are held in a nearly identical posture. The Church provided the ideological basis for the Conquest. At the top of the frame, a figure in religious robes holds a flaming sword in one hand and a bundle of chains in the other. 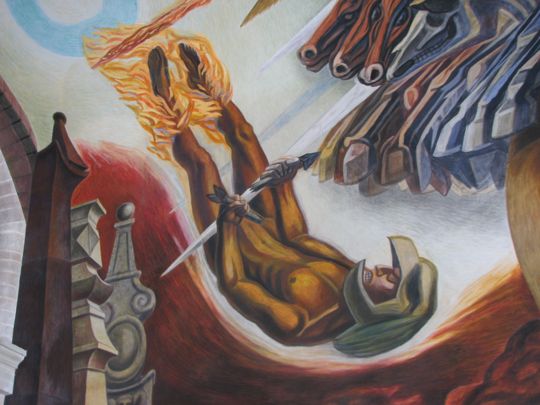 Proud warrior defeated. The Indios' weapons were no match for European armament of the early 16th Century. The Spanish were experts at the ruthless warfare of their day, having just recently driven the Moors from Spain after 700 years of conflict. 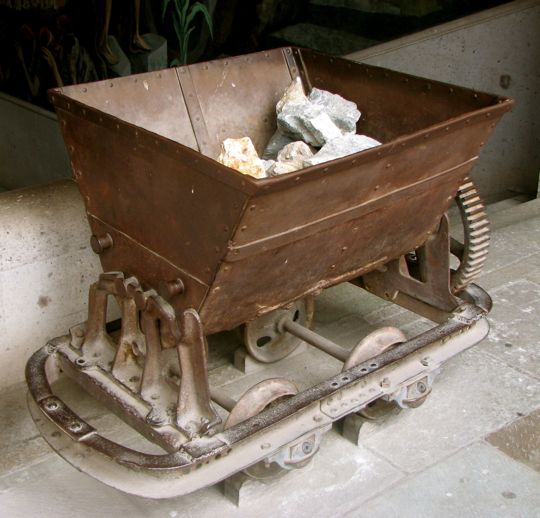 Ore carts such as this once transported Spanish silver from the depths. In 1548 a mule driver named Rayas discovered silver in the remains of his campfire. From then on, Guanajuato became the treasure-trove of the Spanish crown, producing a 2/3s of the world’s silver by the 18th Century, most of it coming from a single silver mine, the Valenciana. Guanajuato also produced gold and other important metals as well as numerous agricultural products. All this made Guanajuato one of Mexico’s wealthiest areas, one reason why the War for Independence from Spain began here. 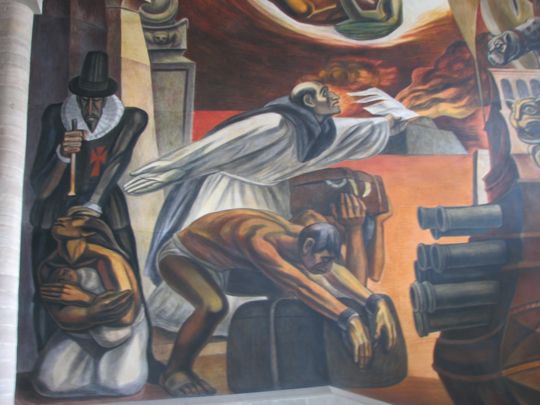 Priest protesting atrocities, to little avail. 300 years of oppression by the Spaniards created a simmering rage among the Indios and mestizos particularly among the miners who labored under the most brutal conditions imaginable to produce the wealth. In addition, Spanish-born aristocracy treated their locally-born counter-parts as second-class citizens. The local aristocracy eyed the riches of their province and could find little reason to continue giving the Spanish a share of it. An uneasy alliance with the lower classes began to form. 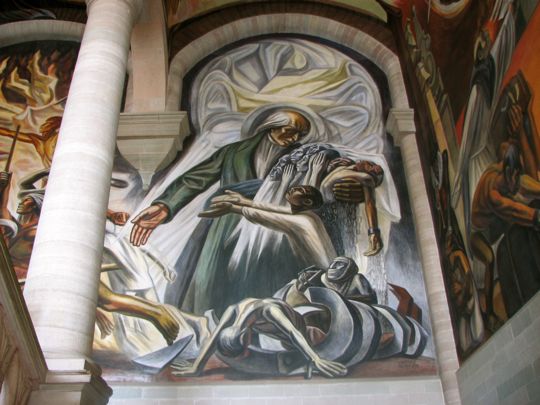 Father Miguel Hidalgo freeing the Indios and mestizos. In 1810 Father Miguel Hidalgo, priest of the church a few miles away from Guanajuato in Dolores Hidalgo, joined together with local aristocrats like Ignacio Allende from San Miguel and launched a revolt. Hidalgo declared freedom for the Indios and mestizos, many of who were little more than slaves. Although he was a very flawed figure, he is revered for this act. 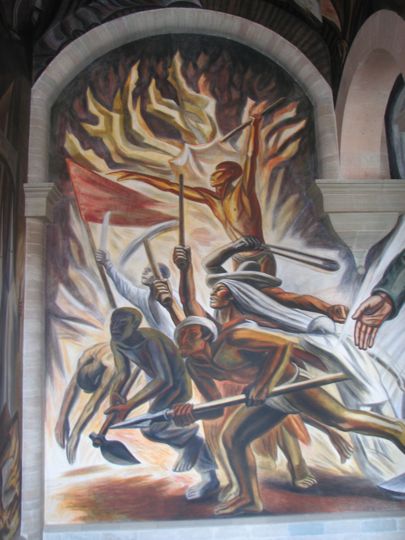 The rising of the oppressed. Hidalgo gained their immediate and enthusiastic support, and the simmering rage burst forth. Beginning with 600 men in Dolores Hidalgo, the lightly armed and untrained crowd grew to tens of thousands of angry campesinos and miners as it approached Guanajuato. 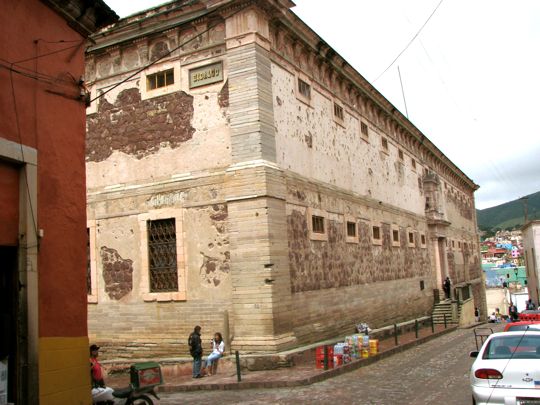 An impregnable fortress, or so they thought. 500 Spaniards, including men, women, and children, holed up in the Alhondiga de Granaditas, a thick-walled granary built at the edge of town. The Spanish hid silver ingots from the mines and their families' jewels in the heaps of grain stored inside. They also sent for help, but none ever came. 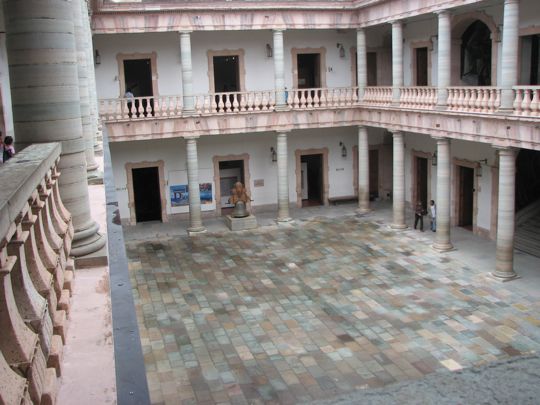 Interior courtyard of the Alhondiga. The Spanish were well-armed and provisioned inside this natural fortress, and felt themselves in an impregnable position. Today, the rooms surrounding the upper and lower floors contain wonderful historical exhibits moving successively from the pre-hispanic to the early 20th Century Revolutionary period. 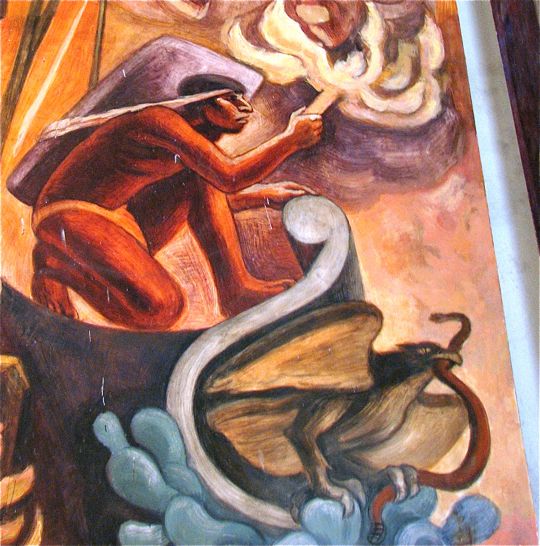 El Pipila lights the way. The Spanish did not reckon on Juan Jose de los Reyes Martinez, an Indio. Juan Jose, known as “El Pipila”, strapped a paving stone on this back to protect against Spanish bullets and crawled with a torch to the massive wooden front door of the Alhondiga. There is some dispute over whether El Pipila survived this exploit, but he certainly succeeded in burning down the entrance door. The painting above is part of a mural in the Museo Publico which will be shown in one of the later postings. El Pipila is perched above the Mexican national emblem of an eagle sitting on a cactus with a snake in its mouth. 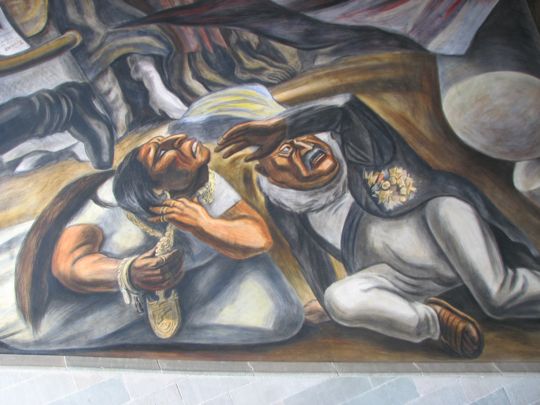 Rich Spaniards cower. The campesinos and miners poured into the fortress, outraged at centuries of oppression. They burned the building along with the 500 Spaniards inside. While satisfying to the oppressed, these and other activities during Hidalgo's march frightened and alienated supporters among the local landowners and commercial people and weakened the rebel cause during this early phase. 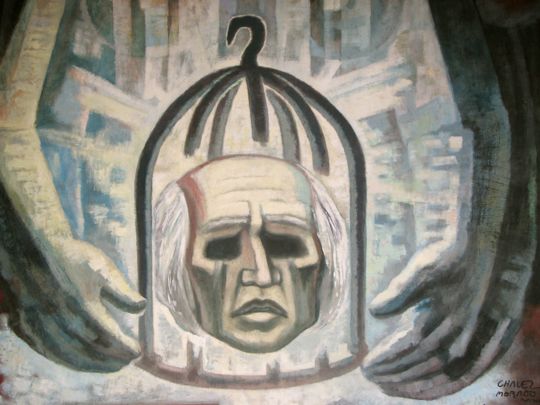 The Spanish make an example. This detail from Chavez Morado's mural shows Hidalgo's severed head in a cage, with bars symbolically broken, and cradled in the arms of an angel figure. The War for Independence continued until the Mexican victory in 1821, but Hidalgo and most of the original conspirators did not survive the first phase. After 5 months rampaging through New Spain, they were defeated and captured. After execution by firing squad, Hidalgo, Allende, and the others were decapitated and their heads taken to Guanajuato where they were hung on the walls of the Alhondiga as an example to other potential rebels. The Spanish couldn’t kill the idea, however, and the rebels eventually prevailed.

This concludes the first of several postings on Guanajuato. Future postings will highlight the magnificent Teatro Juarez, the fascinating maze of alleyways known as callejones which honeycomb the city, the beautiful old hacienda where we stayed, and much, much more.