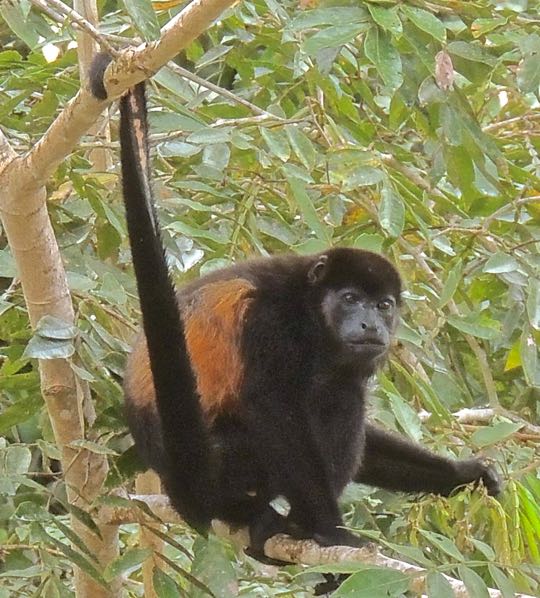 A Mantled Howler monkey pauses while feeding to stare down intruders. Notice how he uses his tail to help brace himself on a tree limb so that he can safely use his left arm to gather leaves. I took this shot from the deck of a tour boat on Costa Rica's Rio Frio (Cold River) near the Nicaraguan border. Rio Frio begins in northern Costa Rica in the middle of the Caño Negro Wildlife Refuge and flows north to where it crosses into Nicaragua. The river trip was part of our Caravan Tour and our tour director promised we'd see abundant wildlife in the area. She didn't exaggerate. When viewing this posting, keep in mind that the animals seen below represent only a small portion of those we encountered. To locate Rio Frio on a Google map, click here. 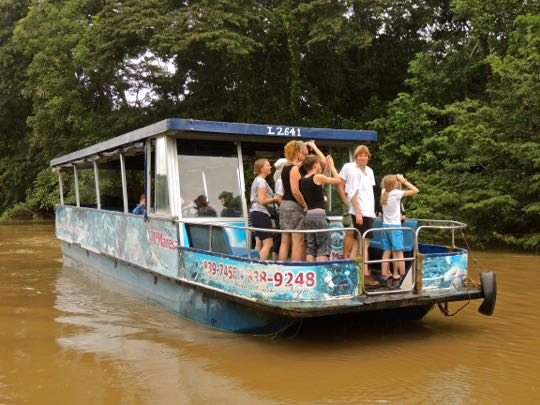 The boats' seating areas are covered as rain protection, but they have open viewing decks. This craft, almost identical to ours, pulled up next to us at a prime spot. From long experience, the boat guides know precisely which areas, and even which trees, are favored by the animals. 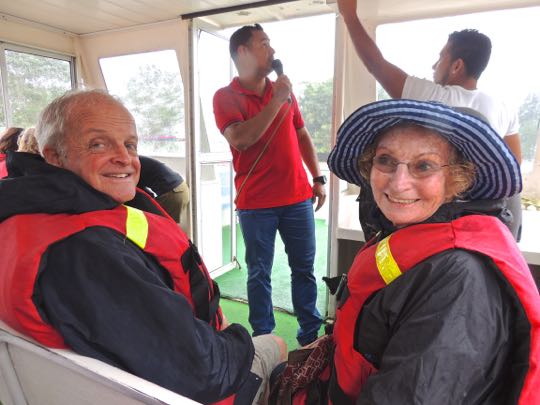 Lanny (l) and Val (r) are a delightful South African couple we met on the tour. Their warmth and sense of humor shines through in this photo. In the background, our river guide speaks into the microphone while the boat pilot stands at the wheel. Our tour director advised us to dress for rain, and for good reason. 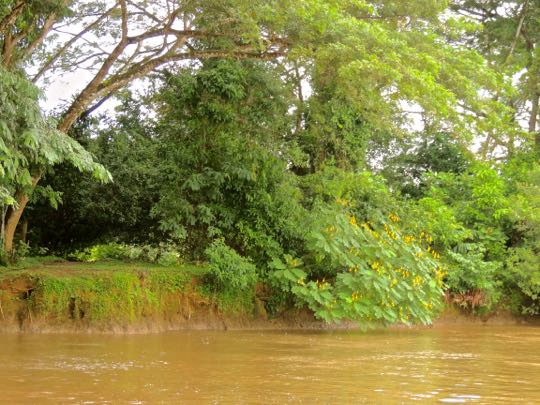 The river flows tranquilly past low banks lined with a trees and other vegetation. The overhanging limbs are populated with a wide variety of birds, reptiles, and monkeys. 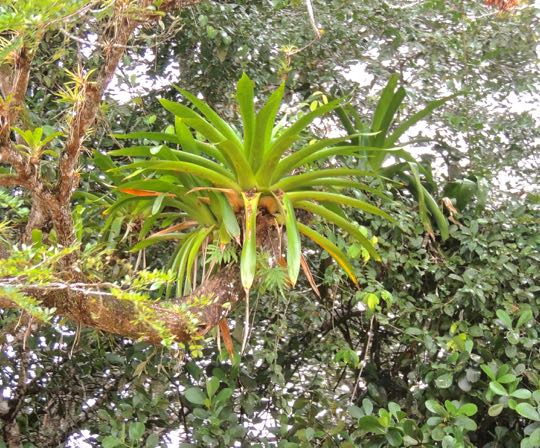 A huge bromeliad clings to a low-hanging tree limb. The species seen above is epiphytic not parasitic, meaning that it does not live at the expense of its host. Epiphytic bromeliads draw the moisture and nutrients they need from the air. Bromeliads are a huge plant family containing 3,170 species, which includes pineapples and orchids. 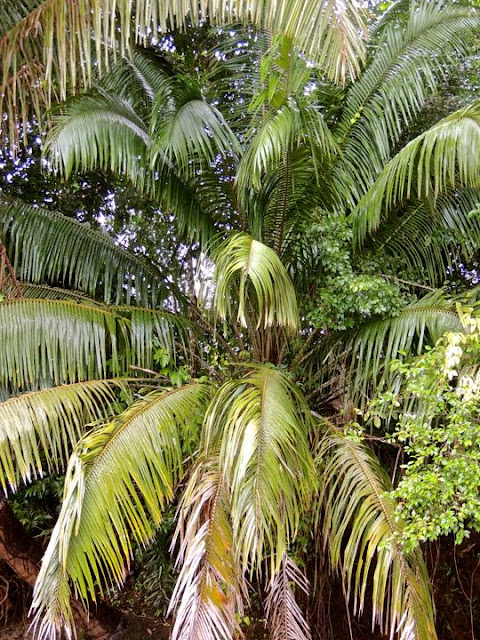 Palm trees were especially numerous. This one was huge, with dramatically spreading fronds. 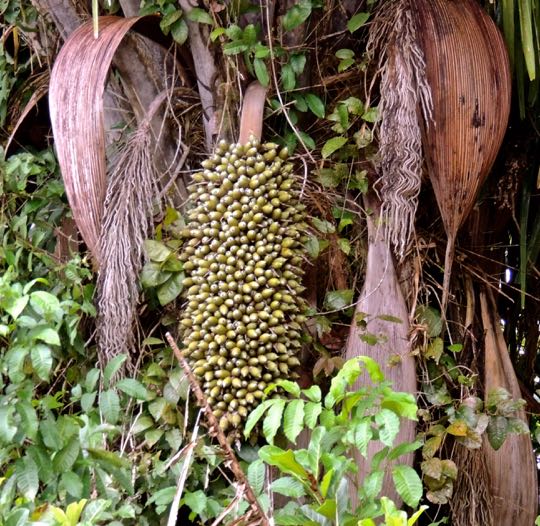 Palm fruit clusters thickly under the fronds of another palm tree. This appears to be a Pejibaye palm (Bactris gasipaes) native to Costa Rica and other Central American countries. It is sometimes called a peach palm and can live from 50-75 years. The fruit is edible and this species is domesticated in some areas. 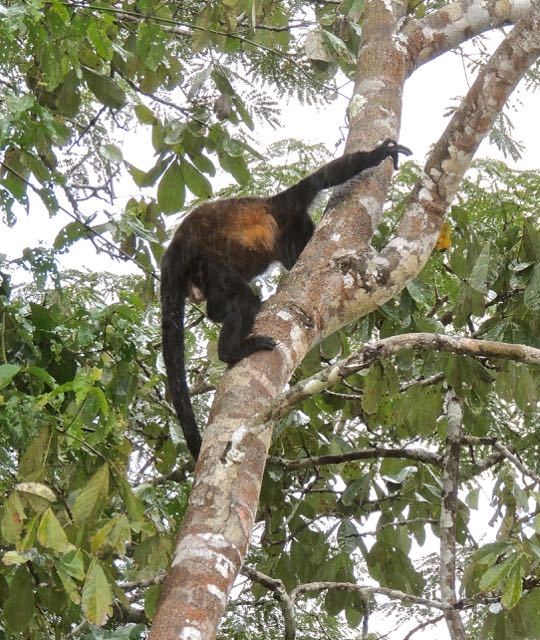 A Howler monkey rapidly climbs a tree as our boat approaches. The Mantled Howler is also called a Golden-mantled Howler due to the light colored fur on its back and sides. The monkey's scientific name is Alouatta palliata. It got its nickname from its loud howling--actually more like hooting. The monkey howls to identify itself and to locate others of its species in the area. The sound, arising from all directions in a late-night chorus, can definitely unnerve a tourist who is not familiar with which animal is making the noise. 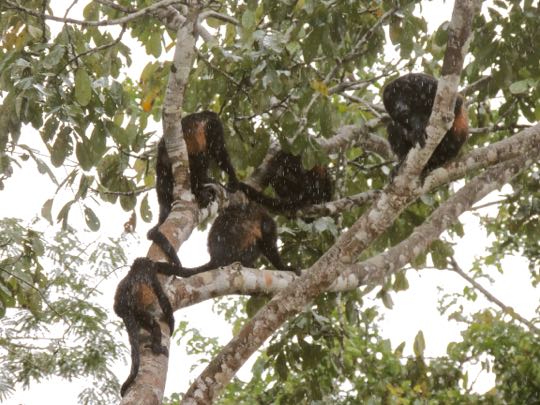 Mantled Howlers live in family groups. Some of these groups can number as many as 40 individuals, but most are far smaller. Generally, young males are evicted from the group by the alpha male when the youngsters reach maturity. If you look closely at their dark fur, you can see streaks of the heavy rain that was falling at the time. 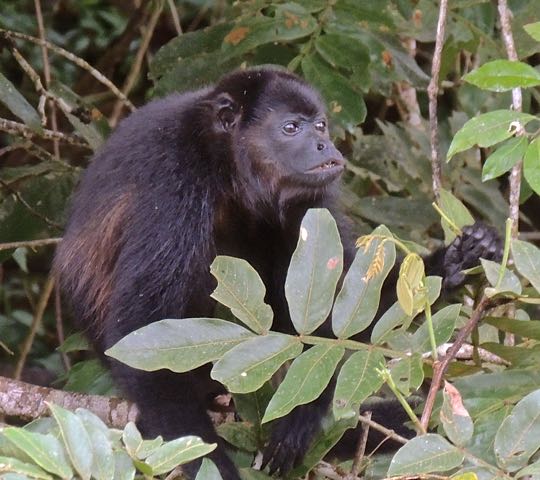 The Howler above has just stripped the leaves from the stem it is holding in its hand. These animals feed primarily on tree leaves, which aren't terribly nutritious. Consequently, they spend a lot of time resting in the crotches of rainforest trees, far above the ground. Although their diet is low in nutrition, the abundance of leaves gives this species an advantage over other monkeys whose food is not so readily available. 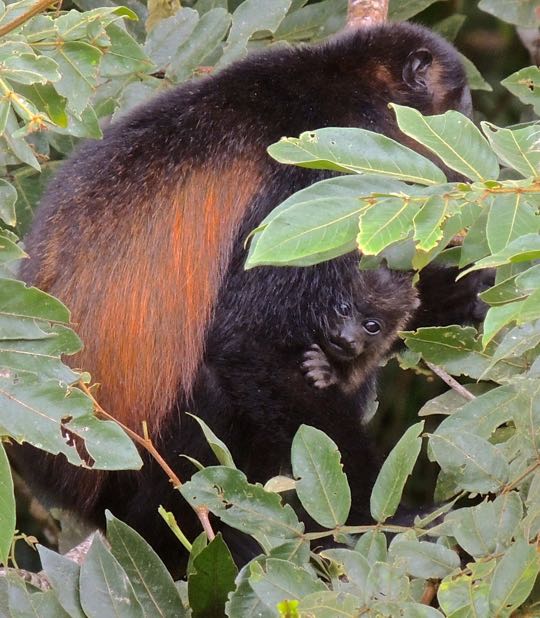 A baby Howler peers from under its mom's arm. The young monkey reminded me of  human children who have shyly peeked at me while half-hidden by a parent's body. Kids are always curious, whether human or animal. 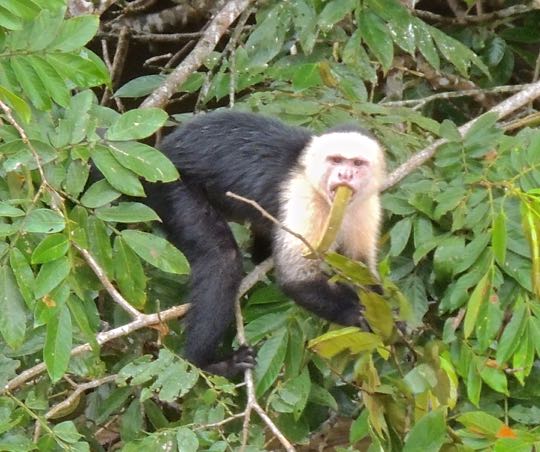 A White-headed Capuchin munches a seed pod. This monkey (Cebus capucinus) gets its name from the white fur on its face and upper arms. To the Spanish, it resembled the hood, or capuche, of a monk's habit. The Capuchin's are smaller and much less husky than the Howlers. They were also much less numerous in this area.


Birds along the river 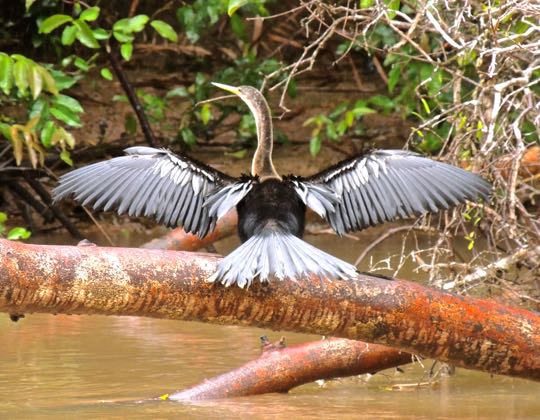 An Anhinga spreads its wings to dry its feathers after a downpour. Anhinga anhinga is the formal name of this large bird. It is also called the American snake bird, from its long sinuous neck. It feeds by diving into the water to catch fish. 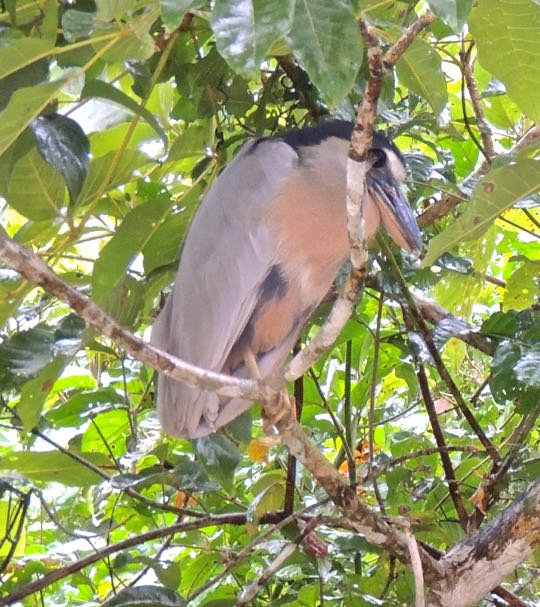 A Boat-billed Heron perches on a limb and scans the river for lunch. The diet of Cochlearius cochlearius includes fish, rodents, eggs, crustaceans, insects, and amphibians. There is certainly plenty for it to eat along Rio Frio. The Boat-billed Heron got its nickname from its broad, scoop-like bill, somewhat resembling a shallow-draft boat. 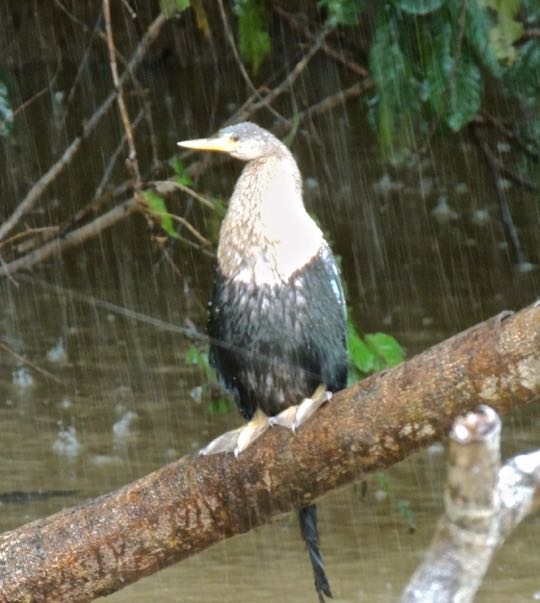 Another Anhinga huddles in the pouring rain. Notice the webbed feet, somewhat like a duck's, which enable it to swim swiftly on and under the water. 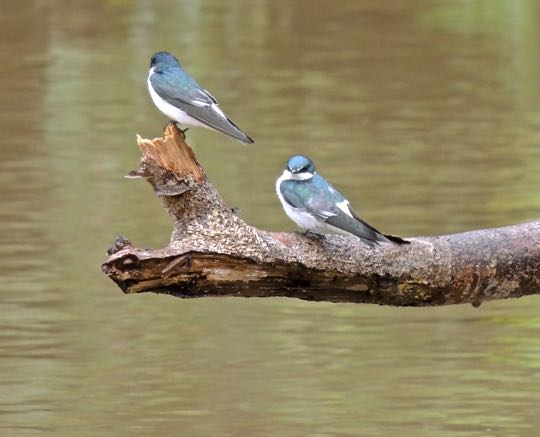 Two Mangrove Swallows sit on the end of a long branch sticking out of the water. Tachycineta albilinea is a non-migratory bird that lives in the coastal regions of Central America and Mexico. It is one of the passerine species which are distinguished by three toes pointing forward and one back. This arrangement enables these birds to perch on branches more effectively than non-passerine species. Passerines make up more than half of all bird species. 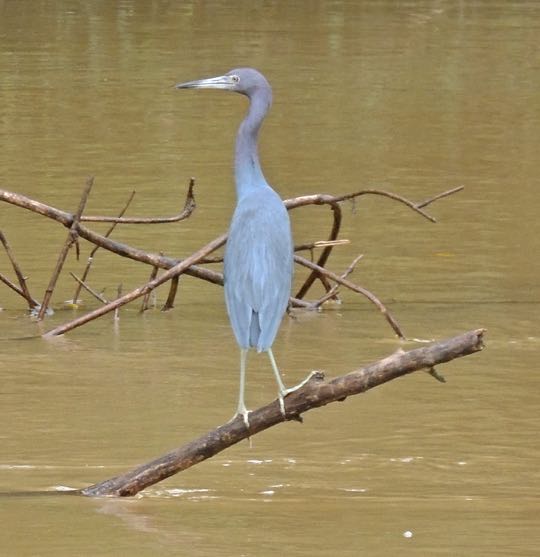 A Little Blue Heron sits on a snag as it surveys the passing river. I particularly liked the delicate blue coloring of its feathers. Egretta caerulea is a close relative of the Snowy Egret and actually resembles the other bird until it molts and gains its blue adult coloring. This coloring protected it from the feather hunters who decimated the white egrets in the 19th century. The Little Blue Heron likes the water and seeks out river banks, swamps, ponds, and the shores of marshy lakes. 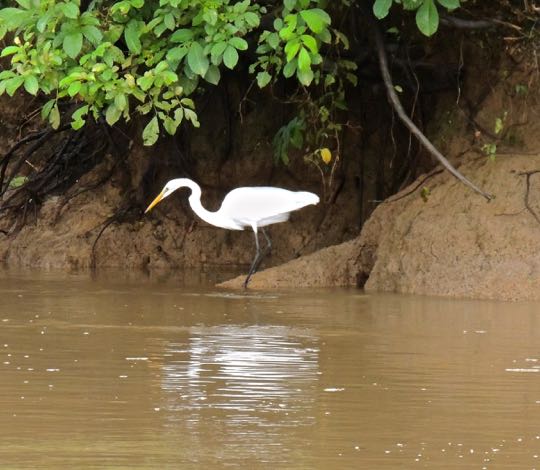 A Great White Egret stares intently into the water, looking for fish, snakes, and amphibians. I recognized this fellow immediately because the shores of the lake where I live abound in Great Whites (Ardea alba). It has a very wide distribution in the warmer, tropical temperate regions of the world. The Great White Egret is distinguished from other white egrets by its size and also its yellow beak and black legs and feet. 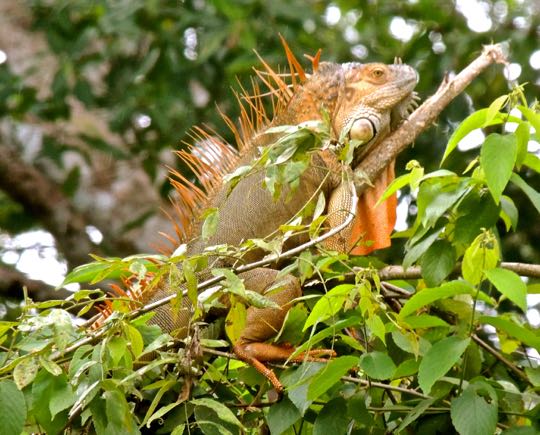 A Green Iguana (Iguana iguana) relaxes on a branch as it advertises its availability for a mate. During the mating season, this iguana turns from its normal green color to the bright orange seen above. The color helps make it more easily visible to iguanas of the opposite sex. Despite their fearsome appearance, iguanas are entirely harmless to humans. 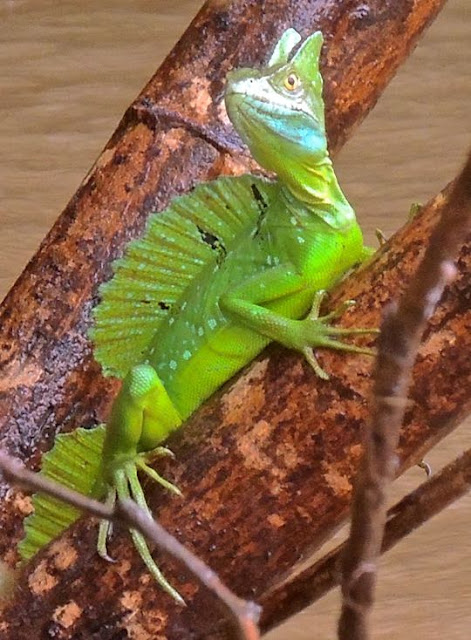 The Green Basilisk Lizard looks like an escapee from Jurassic Park. Basilicus plumifrons is sometimes called the "Jesus Christ Lizard" because of its seeming ability to walk on water. This comes from small fringes on the tips of its toes. These unfurl when it hits the water, creating a tiny air pocket under each toe. The Jesus Christ lizard can sprint 1.5 m (5 ft) per second across the surface. They can make it about 4.5 m (15 ft) before they sink, but then they have excellent swimming abilities. 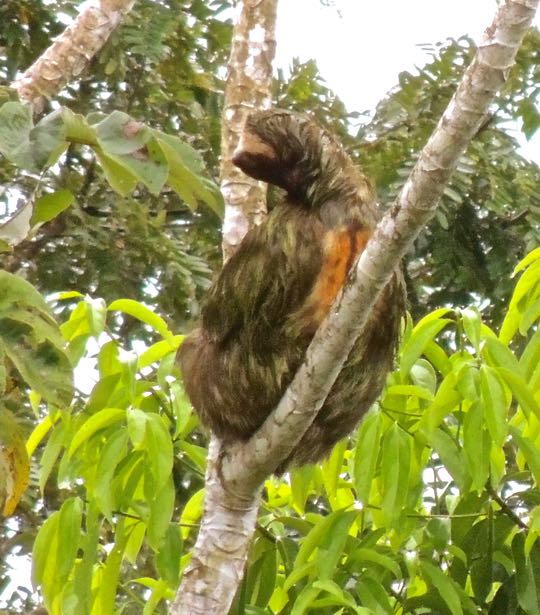 A Three-toed Sloth relaxes in the crotch of a tree. Bradypus variegatus is active during the day, although "active" is a relative term for a sloth. They are very slow-moving animals. This is caused by their diet, which is almost entirely leaves from the trees in which they perch. Such a low-nutrition diet gives them a slow metabolism. That, in turn, requires a thick covering of fur to help conserve body heat. The sloth lives almost its entire life--eating, sleeping, socializing, and mating--in the tops of trees. Just about the only exception is when, once a week, they descend to the forest floor to urinate and defecate into a small hole they dig. The whole process takes about 30 minutes and is the only time when their slowness makes them really vulnerable to predators. It is a mystery why they don't eliminate their body wastes while safely sitting in a tree. Despite this weekly period of danger, sloths often live 20-30 years in the wild. 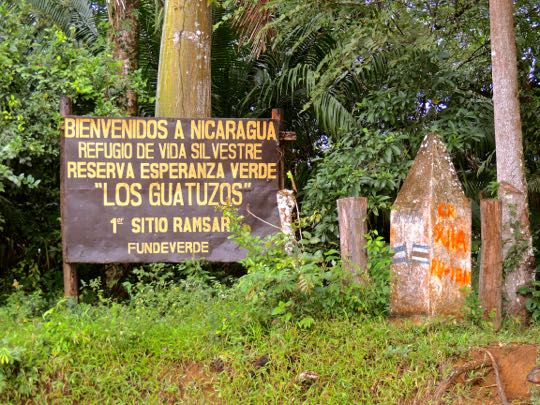 This sign and cement obelisk indicate where Rio Frio crosses into Nicaragua. Other than a couple of strands of rusty barbed wire, there was nothing else to indicate an official boundary. This point marked the outer limit of our river tour. When the boat operator turned the craft and backed up the river, we were--for about five minutes--illegal immigrants into Nicaragua. However, there was no one to challenge our presence in this remote spot and we soon began our return journey.

This completes Part 7 of my Costa Rica series. I hope you enjoyed visiting the animals along Rio Frio and, if so, you will leave any comments or questions you may have in the Comments section below. Alternatively, you can just email me directly.

If you leave a question in the Comments section, PLEASE leave your email address so that I can respond.