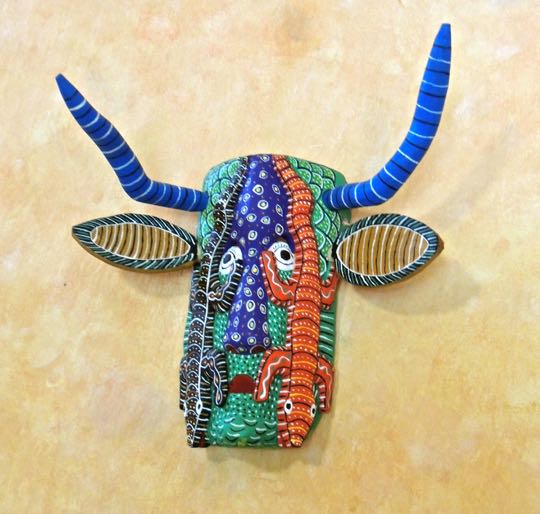 Indigenous mask from the Purépecha pueblo of Ocumicho. During our visit to Zamora, Carole and I scheduled a day trip to investigate several of the small pueblos in the mountains surrounding the city. These pueblos are the home of the native Purépecha people, the largest indigenous population in Michoacan and one of the largest in all Mexico. The carved wooden masks of Michoacan are very distinctive. They are usually anthropomorphic, in this case a mixture of human and cow. Other very common features of Michoacan masks are snakes, lizards, or insects writhing across the features of a mask, along with intricate and vividly painted designs. We purchased this one from one of the artisans in Ocumicho for approximately $24.00 USD. 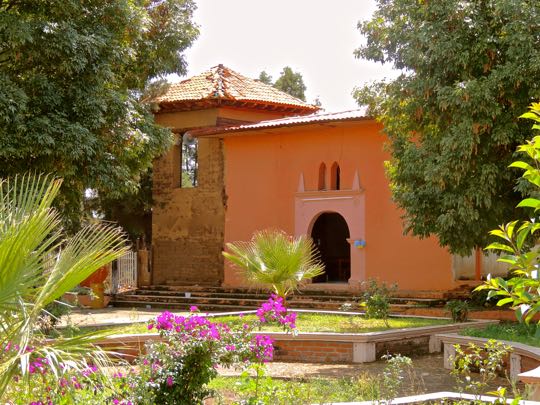 The squat steeple and the double choir window over the door are typical of this region. During my research for this blog post, I consulted with Richard Perry, an expert on the colonial religious architecture of Mexico. He edits a website call Arts of Colonial Mexico and has written a wonderful book called Blue Lakes and Silver Cities. Anyone visiting the states of Jalisco, Michoacan, Guanajuato or Querétaro should pick up a copy. Richard believes this is a Franciscan church, part of a small mission complex sited in the pueblo of San José de Gracia. The town, also known as San José Ocumicho, has only 558 inhabitants, living in 112 households. We discovered it on the way to the larger pueblo of Ocumicho, which was one of our intended destinations on this day trip. 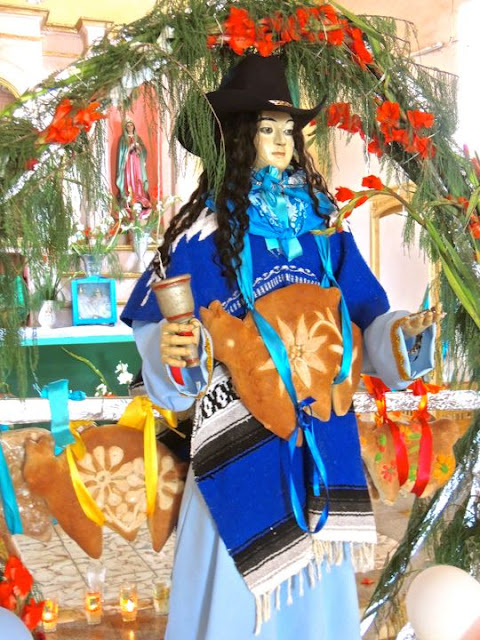 Near the altar of the church, we discovered this rather startling figure. The statue is about 3/4 human size and is set up as a special display in front of the altar. The nature of the display led me to believe that it may be for a special saint's day, rather than being part of the church's regular decoration. Richard suggested the figure might be San Isidro, whose feast day is in May. However, June 28 was the date we visited. In any case, the figure (who might well be a woman) is dressed in a Mexican serape and wearing a rather fancy cowboy hat. Wrapped around the statue's waist is an elaborate leather apron with a flower design. I would be happy to hear from anyone who might be able to identify him/her. 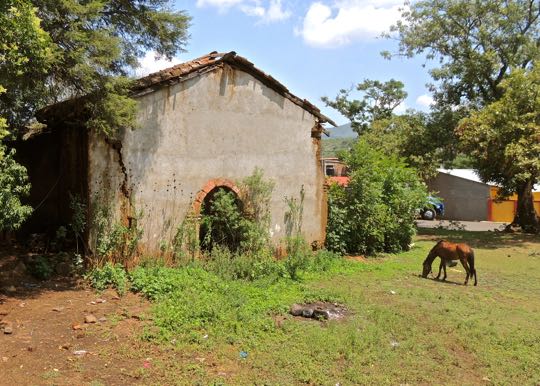 A horse grazes peacefully by the ruins of an old Franciscan hospital for the Purépecha. When I spotted this structure on the street leading into town, we immediately decided it was worth investigating. Our interest increased when we saw that it was adjacent to the old Franciscan church. I thought it might have been the original colonial church, since most of the oldest churches were simple adobe structures like this one. When I emailed the photo to Richard Perry, he replied that this may have been a hospital attached to the mission complex. Its structure is very similar to one that Richard has definitely identified as a Franciscan hospital in the nearby pueblo of Patamban. Another very similar hospital in the pueblo of San Lorenzo is pictured in Blue Lakes and Silver Cities. The adobe structure seen above is rectangular and its exterior is covered by plaster. The clay tile roof is supported by wooden rafters. The only entrance is the arched door. 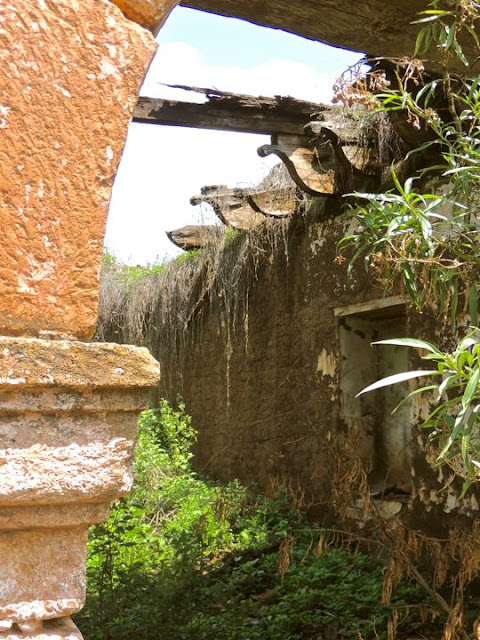 View through the door, showing adobe walls and carved wooden rafters. The interior was overgrown with brush. Apparently the the adobe walls inside the hospital were never plastered, or perhaps the plaster has fallen away. The only brick or stone elements of the structure I found were in the frame of the doorway. The original Spanish "hospitals" were not intended for medical purposes, but to offer shelter, food, and religious services to pilgrims. After all, hospital is the root word for hospitality. As the Spanish Church began establishing missions in the New World, hospitals were seen as a conversion mechanisms. The friars acted as health care providers in order to supplant their main rivals, the native shamans. Thus, the focus of the mission hospitals increasingly became medical care. 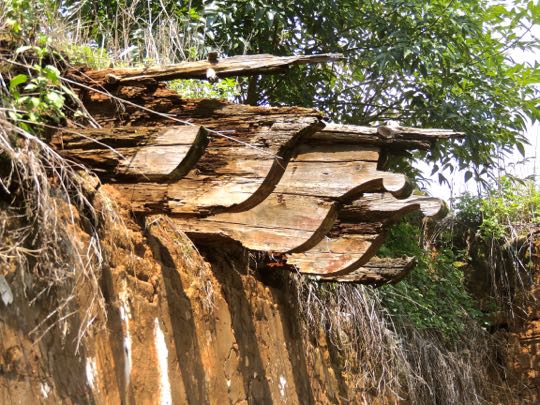 I was intrigued by the graceful carving of the wood rafters. The Purépecha were famous as woodcarvers before and after the Spanish arrival. The vast forests blanketing the mountains of Michoacan gave them ample working material. Hospitals such as this were utilised primarily by the indigenous people. The Spanish overlords avoided them both because of a fear of infectious diseases and because institutional care implied poverty. The Spanish preferred to receive their health care delivery at home.


Ocumicho, home of the little devils 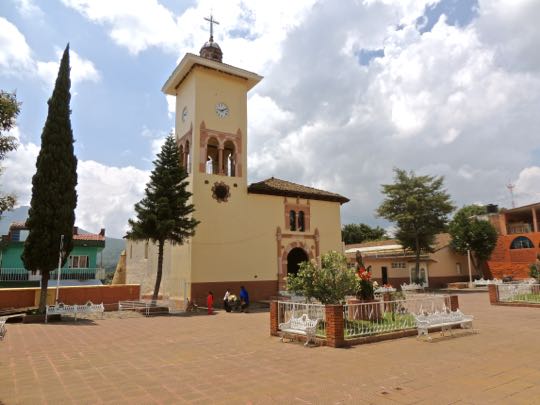 Church of St. Peter and St. Paul in Ocumicho's plaza. This old colonial church is small but very charming. Ocumicho is built on a hillside so the streets wander a bit rather than conforming to the usual colonial grid pattern. Ocumicho was the name of the original Purépecha village. One translation means "place of the cobs", a reference to the production of maiz (corn). Another is "place of the tanners" referring to the tanning deer hides for leather and shoes, an early village specialty. The Spanish who settled here in the mid-16th century received their town charter in 1568. The Iglesia de San Pedro y San Pablo (seen above) was completed in 1622. 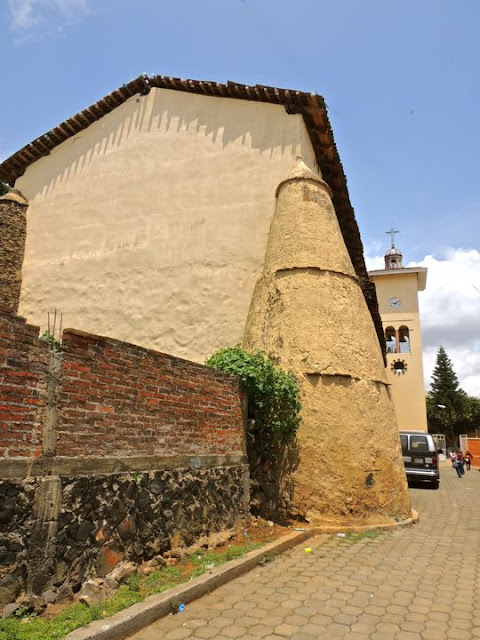 View of the rear of the church. The unusual conical buttresses on the rear corners of the structure caught my eye. This church also has an old hospital attached to it, along with other colonial-era buildings. According to Perry's book, Blue Lakes and Silver Cities, the church/hospital complex was a visita (local branch) of the Franciscan monastery at Tarecuato. 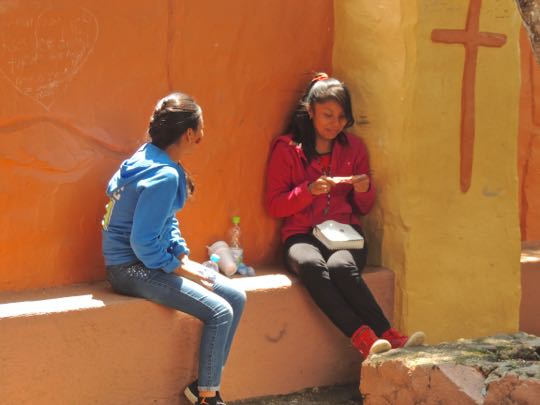 Two girls sit by the entrance of the mission complex. They are giggling over a note in the hands of the girl on the right. I am betting that it was received that day from a boy at their school. Kids are kids, wherever one encounters them. 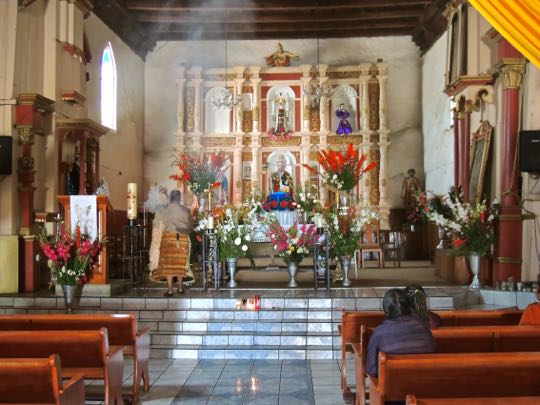 Incense drifts toward the ceiling at the altar of the church. A Purépecha woman moved about, fumigating the various images and statues of saints with incense. Another couple of women sit near the front, chanting quietly. When I asked her, the woman with the incense confirmed that it was copal. Copal incense had been used for centuries by pre-hispanic civilisations in their religious rites. Since incense had long been used in Catholic religious rites, copal was quickly adopted by evangelising friars. Copal comes from the resin of the copal tree (Protium copal) and has an aromatic but slightly acrid scent. 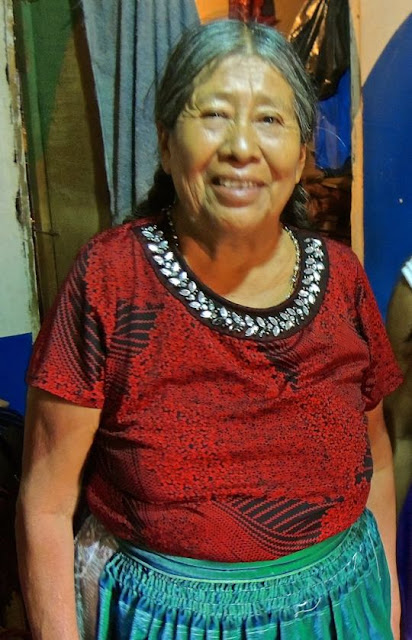 An Ocumicho artisan, dressed in traditional Purépecha style. This woman was one of those we encountered in the church. She spotted us immediately as potential customers and quickly persuaded us to visit her nearby home in order to view her pottery creations. The local artisans, who appeared to be largely women, were friendly and not the least bit shy about button-holing stray tourists who might come their way. Since we had visited Ocumicho in good part because of its reputation for artisanship, we were an easy catch. She led us through a maze of ancient streets to her home. Most of the local artisan's work is not sold in Ocumicho itself, but in Zamora or other Michoacan cities. There are few places where the work is displayed. You must seek out the artisans, or let them find you. In our case, it didn't take long. 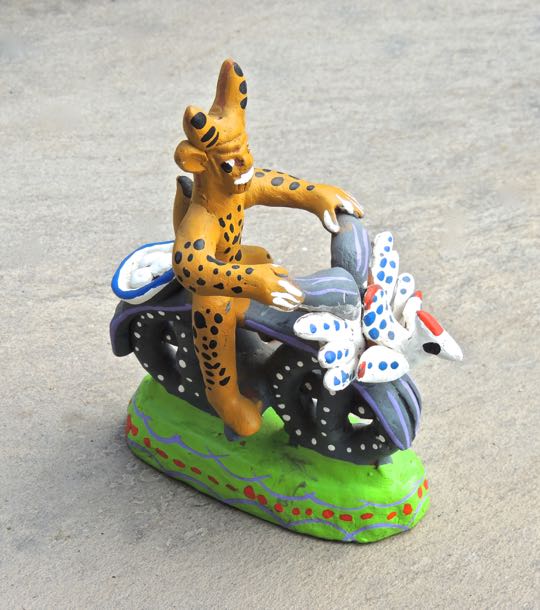 A grinning little devil revs up his motorcycle. Carole selected this little guy. On his front mudguard is a chicken and a basket of fresh eggs adorns the rear. Devil figures like this are a speciality of Ocumicho and have made the pueblo famous. Each figure is unique and made by hand by the artisan. Most are portrayed in a humorous manner. According to local legend, one day the devil came to Ocumicho and bothered everyone. He entered the trees and killed them. Locals dogs did nothing but shake and cry. He pursued people and made them sick and mad. Finally, someone had the idea of creating little devil figures so that Ocumicho could become a place where the devil could live without bothering anyone. Who created the first devil figure is a matter of some dispute. Some say it was a young man named Marcelino. Others claim it was a grandmother named Guadalupe Linares Margarita. Whoever it was, the local community has benefited greatly. 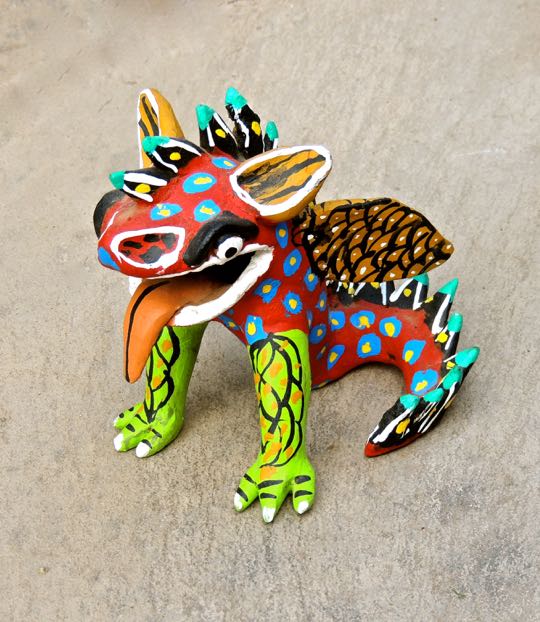 This little dragon-dog was my favourite. With his lolling tongue and happy face, I couldn't resist. He comes equipped with a pair of colorful wings, but I have yet to see him fly. This style of creature is called an alebrije. The style originated in Mexico City in the 1930s. when an artist named Pedro Linares created the first examples based on a dream. While sick with a fever, he hallucinated a forest filled with strange, unknown animals. All were crying out "alebrije!", a word which has no meaning in Spanish. He dubbed the creatures alebrijes and began to model them in cardboard and paper maché. His work became popular and the craze for alebrijes spread, eventually reaching the remote village of Ocumicho. 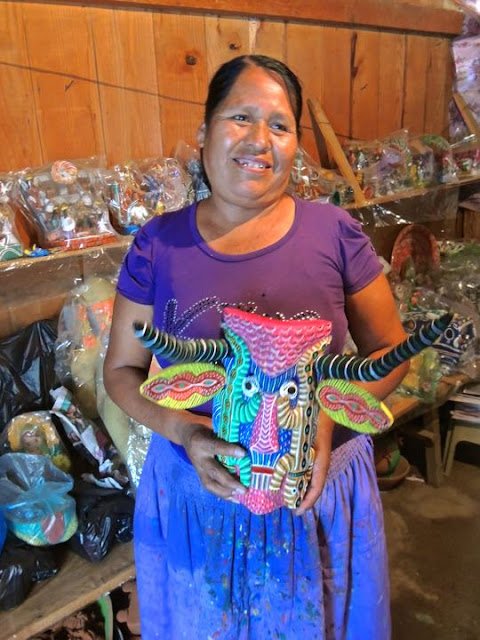 Another artisan displays her carved wooden devil mask. This one is very similar to the one I bought, seen in the first photo of this posting. The woman above is the cousin of the first artisan. She happened to be at her cousin's house when we came to examine the clay devils. As we left, she insisted that we come to see her ware too. That his how I ended up with my beautiful devil mask. The local artisans are nothing if not enterprising. 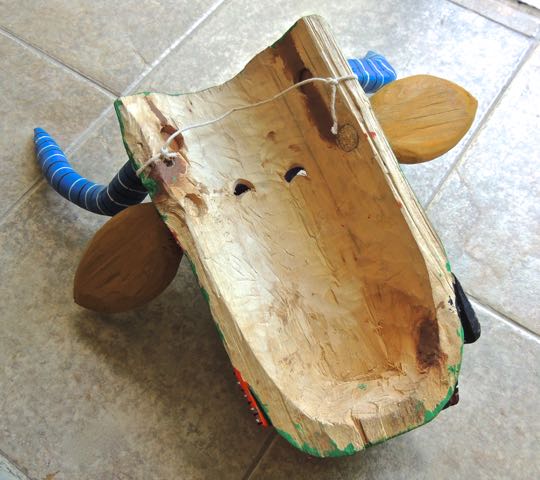 Reverse side of my Michoacan mask. This view shows how the wood was hollowed out to create a space for the wearer's face. The two small holes, located just above the eyeballs of the mask, allow the wearer to see through it. The ears and horns are inserted with dowels into holes and are removable to allow easy transport.

This completes Part 6 of my Zamora series. I hope you have enjoyed it and, if so, please leave any comments or questions in the Comments section below or email me directly. If you have a question, PLEASE leave your email address so that I can respond.