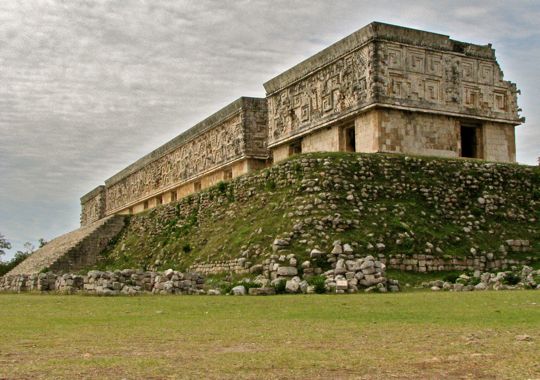 Governor's Palace is one of the finest examples of Puuc-style Maya architecture. The Governor's Palace took immense effort to build, in part because of the platforms on which it sits. The Palace was built around 987 AD, one of the last major edifices raised at Uxmal at the end of the Late Classic Period. This Puuc-style building incorporated, or was constructed over, some earlier buildings in the Chenes style. But first, before putting up any buildings, the Uxmal Maya raised and leveled an immense earth and stone platform a couple of hundred yards long and at least a hundred yards across. Using this as a base, they then raised a second long platform. The Palace itself was then erected on top of the second platform, as seen above. This was a huge public works project for a city whose population, including farmers in surrounding settlements, probably never exceeded 25,000 people. In addition to the Governor's Palace, a second, smaller structure called the Turtle House (out of sight to the right of the photo) was built on the broad platform below the Palace. To help you place the various edifices at Uxmal in their proper relationship with each other, here is a site map. 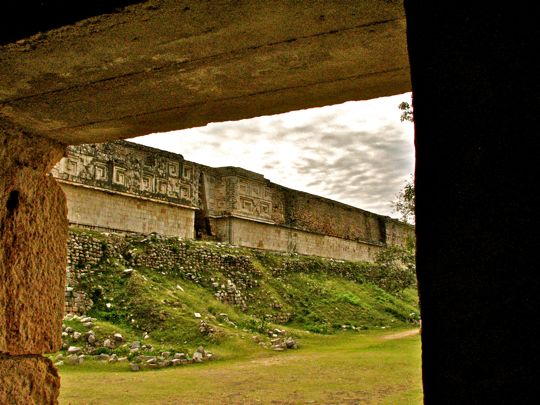 Rear of Governor's Palace, from a Turtle House window. As you can see, the rear of the Palace displays a high level of decoration on its frieze. The slender triangular opening in the middle of the Palace wall was an entrance to a hallway through which, at one time, you could walk through to the front side of the building. At some point in the misty past, this hallway was closed by large stone blocks. The outside of the Turtle House is decorated with stone sculptures of turtles, a creature closely associated in the Maya mythology with water, an ever present Maya concern. 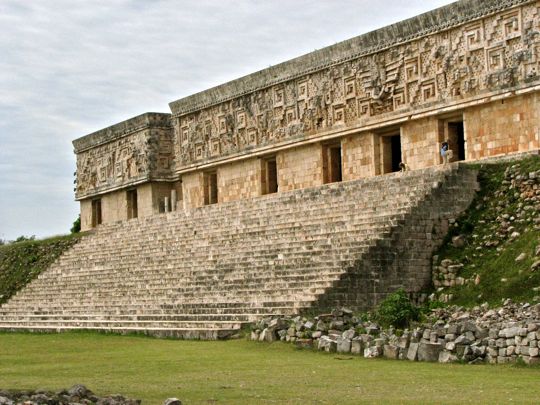 Entrance to the Governor's Palace was by way of this grand stairway. A 16th Century Spanish priest named Fray Diego Lopez de Cogullado gave the name "Governor's Palace" because it reminded him of similar palaces back home. The Spanish often gave fanciful names to Maya ruins, but Fray Cogullado may have been right this time. The Governor's Palace may have actually been the chief administrative center of Uxmal at the time it was built. 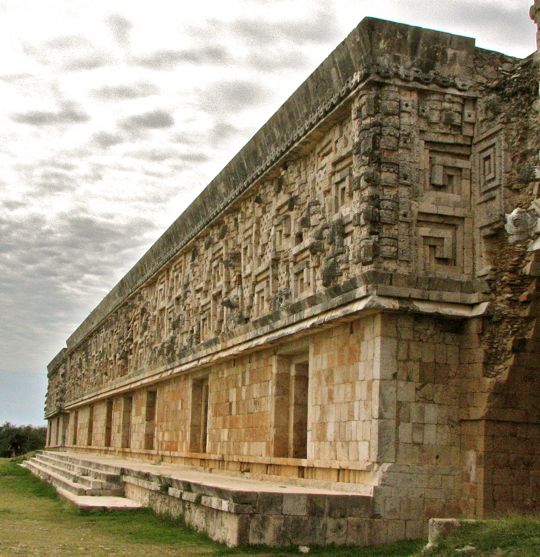 At the top of the grand stairway, the Palace stands on its long platform. The mosaic facade stretches 320 feet. Over 100 masks of Chac, the rain god, decorate the frieze on the upper half of the building, ending in stacks of Chac masks on the corners. The Uxmal Maya literally left no stone unturned to curry favor with the god who ensured adequate rain. In another fascinating twist to Uxmal's story, the new science of archaeoastronomy may have answered a question archaeologists have long wondered about. No one could understand why the Palace did not conform to the general direction of other buildings in Uxmal. Recently, archaeoastronomers discovered that the central doorway of the Palace perfectly aligns with the planet Venus, a powerful symbol of death and re-birth to the Maya and many other ancient Mesoamerican civilizations. 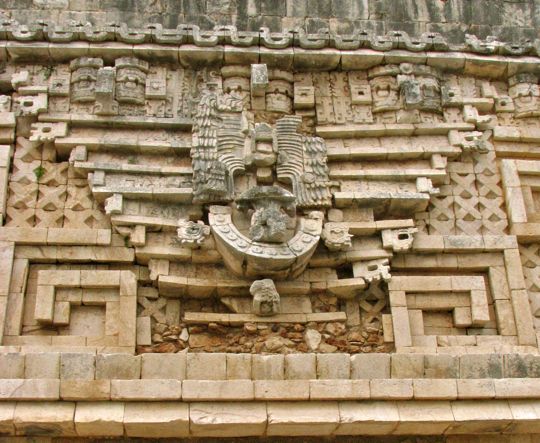 Detail of the Governor's Palace facade. The highly skilled stone masons of Uxmal created unbelievably intricate abstract designs, and then added beautifully carved representations of gods, snakes and birds. The central element in the design above, which appears above one of the doorways, seems to be a bird with wings outstretched. 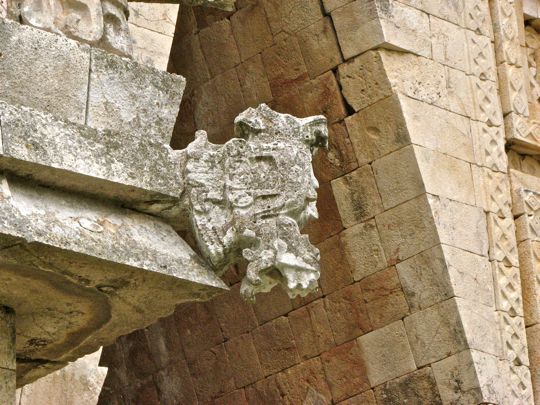 Snake head decorates the tall triangular entrance of a now-blocked hallway. This snake head resembles one I saw on the facade of the Quadrangle of the Nuns (scroll down to see Uxmal Part 1). The snake head there represented Quetzalcoatl, the plumed serpent god of the Toltecs, who invaded Yucatan around 1000 AD. The Toltecs often added their own design elements to the existing Puuc-style buildings, and the snake head above may have been a Toltec "upgrade." 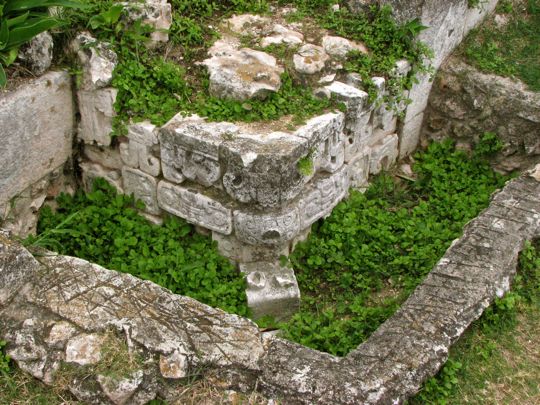 Even the humblest parts of the Governor's Palace were highly decorated. The photo above shows one of the bottom corners of the platform upon which the Palace sits. Almost every stone has a language symbol or design. 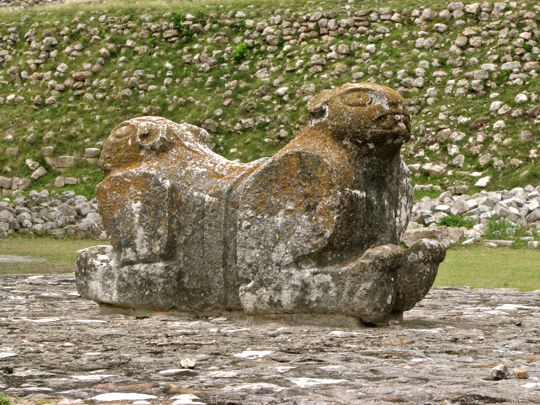 Double-headed jaguar throne may have once been graced by the rump of a ruler. The jaguar was a major symbol of power to the Maya and other Mesoamerican civilizations. This sculpture, clearly intended as a seat, was placed on a low platform immediately in front of the Palace, at the base of the grand staircase. A ruler seated here could survey a gathering of hundreds of nobles in the wide open space provided by the huge base platform. 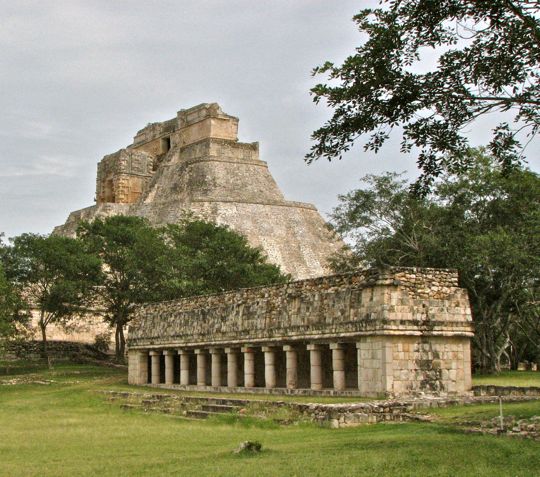 Columned building provided me with an additional mystery. This beautifully proportioned little temple is completely unidentified in any material I have found on Uxmal. It sits between the Sorcerer's Pyramid (seen in the background) and the Governor's Palace. In spite of its beauty and excellent state of repair, there was no sign at the site identifying it. I have searched every site map I can find and none of them show it, although they often show lesser structures. If any viewer has information about this structure, please leave a message in the comments section at the end of this posting, including your source. 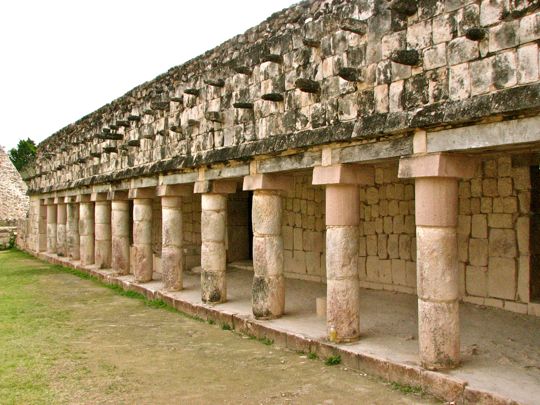 Closeup of the mystery temple. Columns like this may be an element introduced by Toltecs or possibly the later Xiú, a central Mexico tribe who conquered Uxmal after the Toltecs, and ruled it until the Spanish arrived. The Temple of the Warriors in Chichen Itza, built by the Toltecs, and upgraded by the Xiú, contains hundreds of columns similar in design. However, this is all speculation on my part. 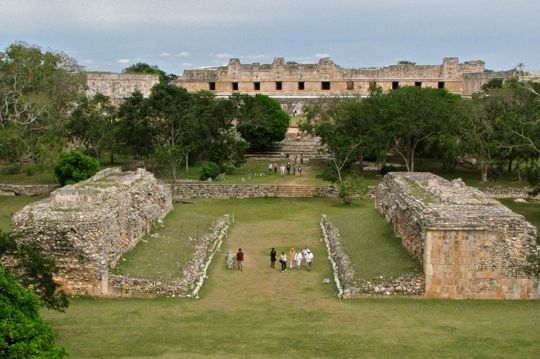 The Ball Court. Virtually every Maya city contained a ball court. This one was originally built in the year 649 AD, according to an inscription found at the court. That would put the construction at the beginning of the great flowering of Uxmal, and northern Yucatan Maya civilization in general. A later inscription, dated with the Maya equivalent of 901 AD, indicates Toltec influence. This later inscription commemorates the addition of a huge coiled stone snake to the Ball Court, representing Kukulkan, the Maya word for the plumed serpent, Quetzalcoatl. Apparently the influence of the Toltecs was powerful in the area at least 100 years before they invaded. The playing field extended from one vertical wall to the other, and included the low grass-covered benches on either side. About 1/2 way down the court, set in the vertical walls on either side, were 2 large stone rings. 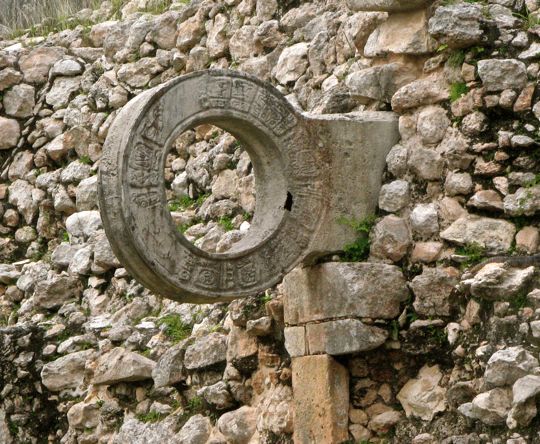 The object of the game was to project a hard rubble ball through this ring. There was another ring like this on the opposite side of the court. The playing ball, made of hard rubber and very heavy, was slightly larger than a modern basketball. As far as archaeologists can tell, the game may have been a little like soccer, in which the hands cannot be used. However, the Maya ball apparently could not be kicked either. The waist, forearms, and thighs were all that players were allowed to use. This was in no sense an easy game. The players, of which there may have been 12 to a side, were heavily padded and wore protective helmets. The game symbolizes the creation of the world, and held deep religious significance. This was true not only of the Maya, but to nearly all other Mesoamerican civilizations. The ball game dates all the way back to the Olmecs, more than 1000 years before Uxmal was founded. Ball courts have been found from Nicaragua to northern Arizona in the United States. 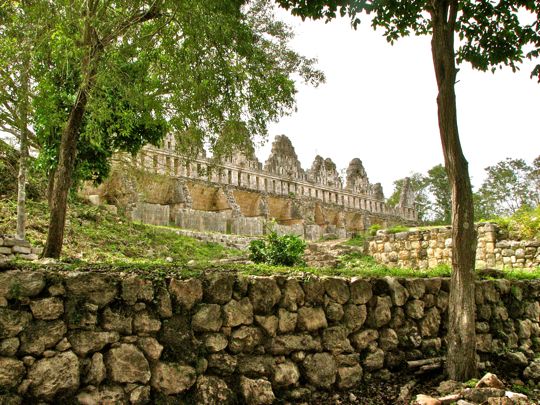 The Dove Cote, or Pigeon's House. The niches in the roof comb, seen in the background of the photo above, appeared to European eyes as a nesting area for doves or pigeons. Roof combs, so common in Palenque, are absent in the Puuc style of Uxmal except for this outstanding example. The effect is light and lacy, difficult to achieve with a stone building. 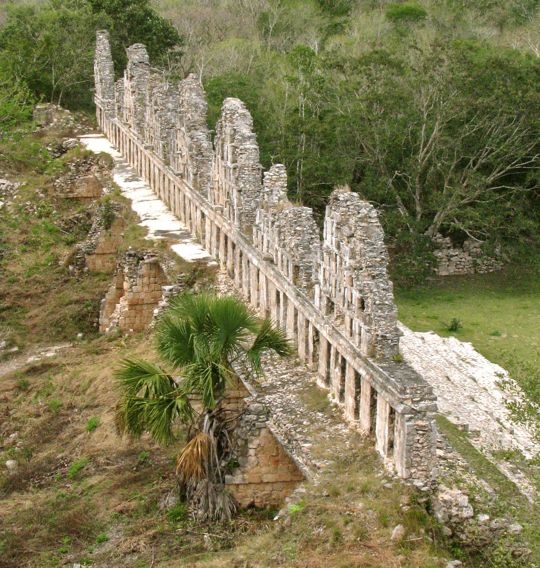 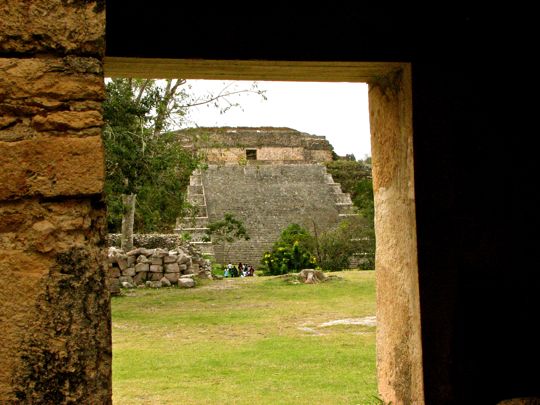 Front view of the Great Pyramid from a window of the Turtle House. Visible are the grand staircase up the front, and the Temple of the Guacamayas (parrots) on top. A single door leads into the temple. The Great Pyramid is just under 100 feet tall, making it slightly lower than the Sorcerer's Pyramid. However, the ancient Maya appear to have partially dismantled the pyramid, in preparation for covering it over with a much larger structure, but the work was abandoned at about the time all other architectural work in Uxmal came to an end. 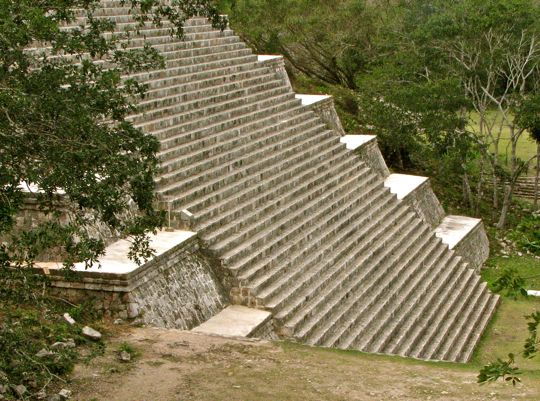 The grand staircase gives a hint of the Great Pyramid's ancient majesty. The sides and back are still covered by rubble and brush, but these beautiful stairs probably saw many a great procession of feather-bedecked priests and noble. The precision and alignment of the stairs and the supporting portions on each side are impressive. 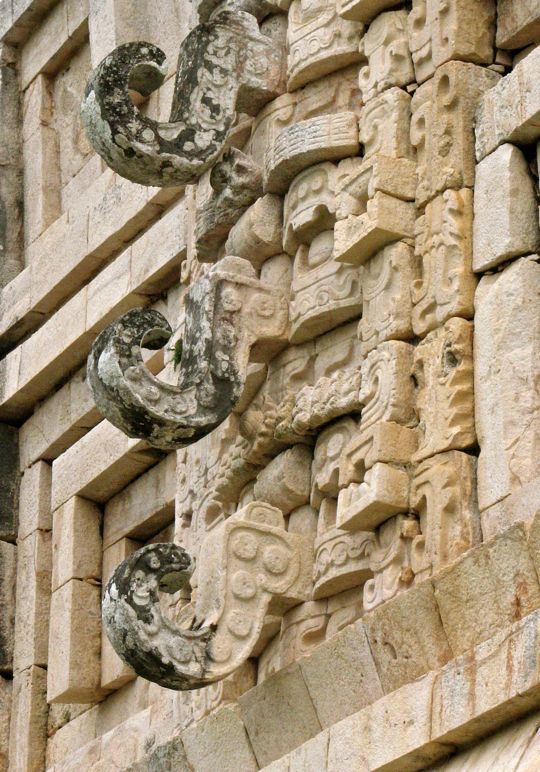 At the top of the grand staircase, the ubiquitous face of Chac. Adorned with their staring eyes and elephant-like trunk, the Chac masks gaze into distance and eternity. 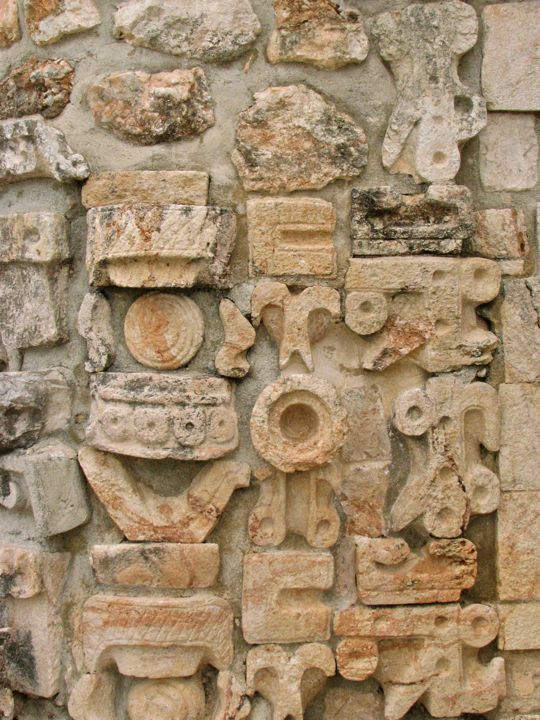 Abstract designs or hieroglyphics? I wasn't able to determine which these were. The Maya used designs of various sorts, all no doubt fraught with meaning to them, but unintelligible to me. 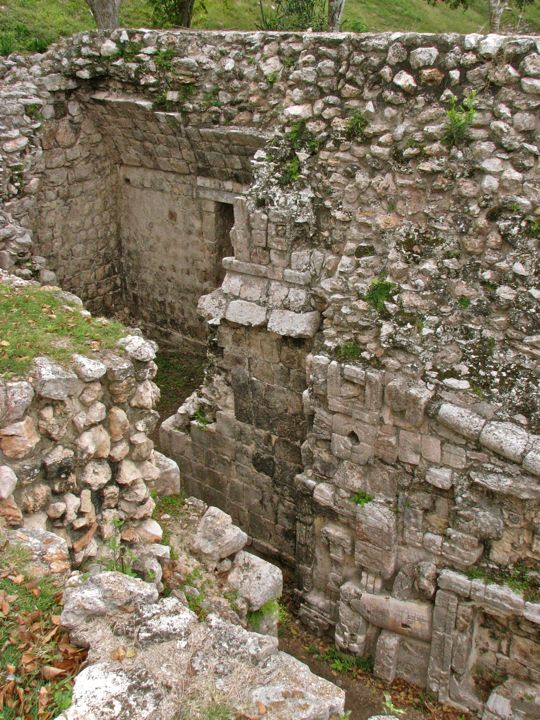 Much of Uxmal is still undiscovered. Lying between the Governor's Palace and the Great Pyramid, these recent excavations reveal more passageways, stairs, and intriguing doors with every spadeful of turned earth. 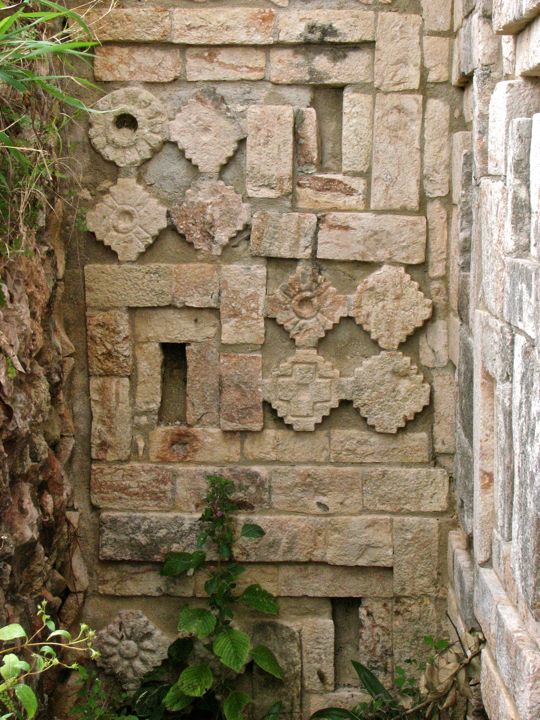 In an out-of-the-way niche, more abstract designs. I found this niche near the new excavations. The Puuc style tends toward balance and repetitive designs. The more I explore Mexico's ancient ruins, the more I realize how much there is still to be learned, after more than 150 years of archaeological digs. In my research for this blog, I found almost all previous notions about the ancient Maya undergoing challenge and revision, based on new evidence and reinterpretations of old material during the last few years. With each new piece of evidence and new theory, the mystery deepens. But then, 2000 years from now, what will archaeologists think about the ruins of Yankee Stadium, the Lincoln Memorial, and a McDonald's fast-food restaurant?

This concludes the second of my 2-part series on Uxmal. If you enjoyed it, I invite you to leave a comment in the section below, or email me directly. If you leave a question in the comments section, PLEASE leave your email address so I can answer you.