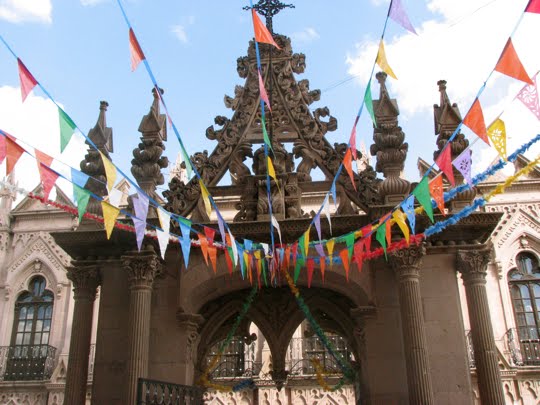 A visit to a Pueblo Magico. Above, the entrance gate of of El Santuario de Nuestra Senora de la Soledad in Jerez is draped with banners for a fiesta. Jerez is about the same distance southwest from Zacatecas as the La Quemada ruins, 57 kilometers or about 25 miles, but it is a little further west. Both can be visited on the same day-trip. A visit to Jerez was one of Carole's priorities because of its Magic Pueblo status. To gain this status, a town in Mexico must have special architectural, historical, or cultural aspects. Jerez has all three, and more. 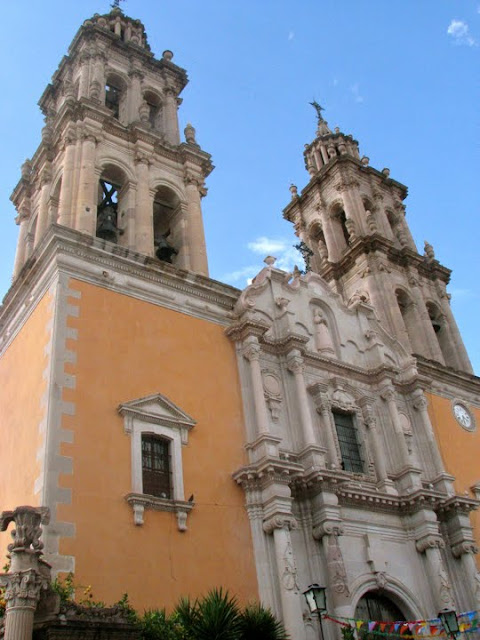 Sanctuary of Our Lady of Solitude. The church as built in 1805 in the neoclassic style that had begun to replace the baroque. El Santuario is famous for its resemblance to a very famous sanctuary in Spain called Santiago de Compostela. Nuestra Senora de la Soledad is the patron saint of Jerez and is reported to have interceded to bring military victories three times to forces protecting the town. 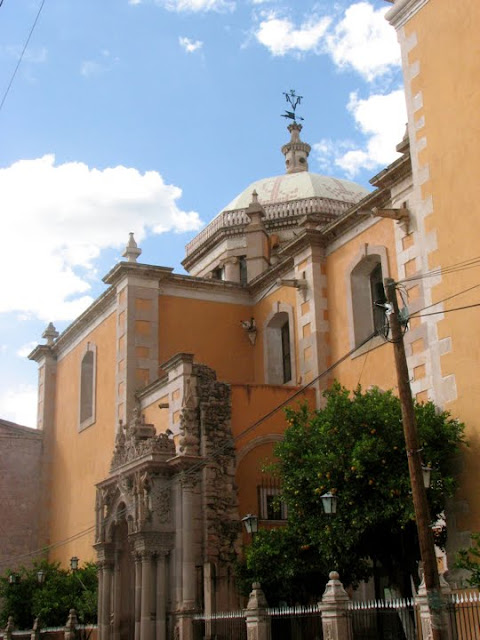 A town born under seige. Above, the side view of the Sanctuary shows the dome over the main altar area. Apparently, Jerez needed divine help because the indigenous inhabitants had some serious objections to the Spanish arrival. From the earliest days of Spanish colonization in 1531, various tribes including the Zapotecs and the Guachichiles fought them bitterly. In the Jerez area, the locals waged such an intense war that the Spanish had to abandon the town for a time and withdraw to safer precincts. For nearly 50 years, the indigenous people attacked settlements and--even worse from the Spanish point of view--the silver caravans from Zacatecas to Guadalajara. 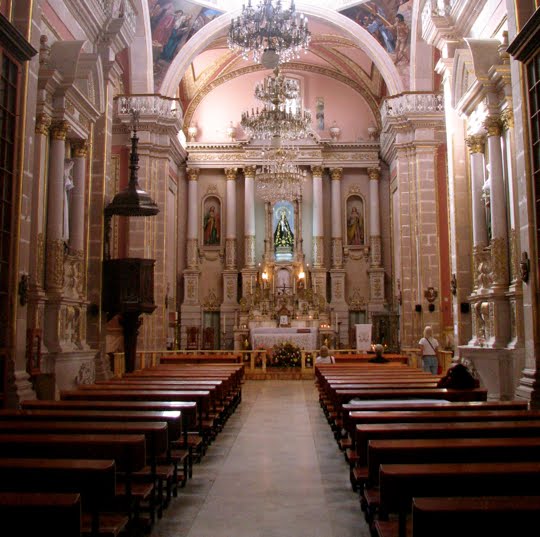 Interior of La Senora de la Soledad. The cool, quiet, dim interior of the church lends itself to prayer and contemplation. Between 1550 and 1570, the indigenous people's attacks were incessant. Finally in 1570, a Spanish captain named Pedro Carrillo Davila set up a military post which became a permanent settlement called Jerez de la Frontera. The name was possibly taken from a similar town in Spanish Andalusia which was known for its fortified wine called sherry, or Jerez in Spanish. 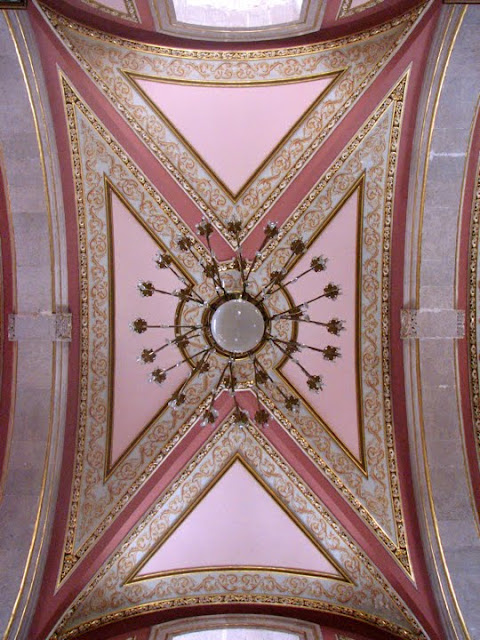 A view of the arched ceiling of the Sanctuary. I took the shot above from directly below the chandelier, which appears as a starburst from below. I'm always impressed by the fine detail in features of colonial religious architecture which might otherwise be overlooked, such as the ceiling. Jerez was an outlying town of other jurisdictions until after the War of Independence when in 1824 it achieved the status of municipality, roughly equivalent to a US county. 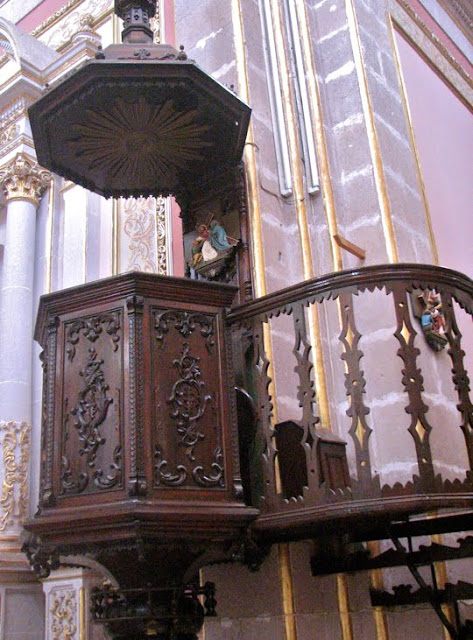 Richly decorated pulpit adorns the side of the interior of the Sanctuary. The nearby Cardos mountains probably supplied the wood for this creation. In 2005 the municipality of Jerez had a population of 56,980, of which 38,624 live in the town of Jerez, which corresponds to a county seat. Jerez is surrounded by the flat, lush farmland of the Malpaso Valley. The town seems prosperous, and the people we met were very friendly and outgoing. 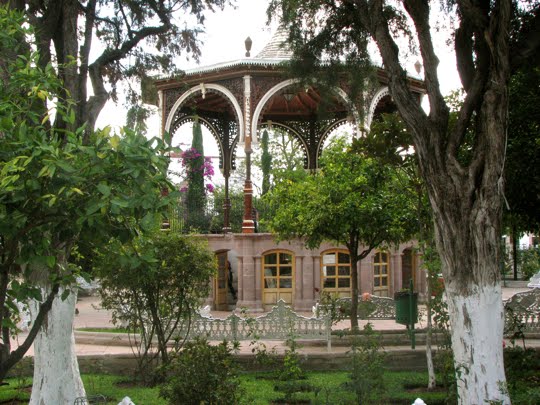 A lush, beautifully tended town Plaza. As with most towns we have visited in Mexico, the Plaza was central to everything else. The one in Jerez was obviously the pride of the community. Also, like nearly every other plaza we have seen, the centerpiece was the kiosco, or bandstand in the middle. This one was unusual because there was an office underneath housing the tourist bureau. Usually there are no windows on the bottom of a kiosco and the room is used for storage if anything. With windows all around looking out on the beautiful greenery, it seemed like a great work location, as well as making a lot of sense for a tourist office. Too often, in my experience, tourist offices are in obscure locations. 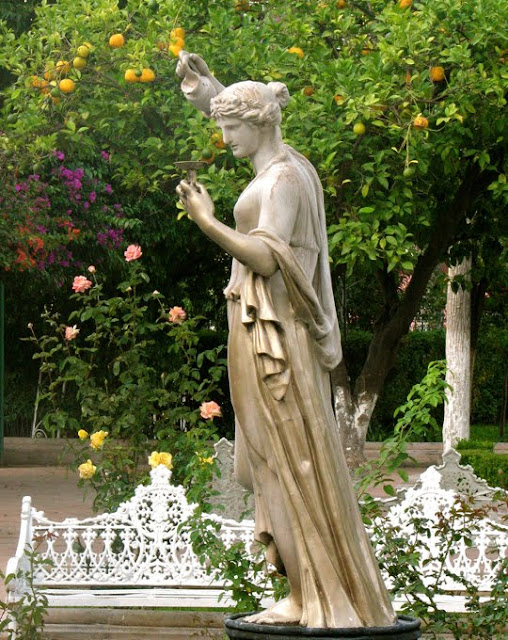 Statue forms an unusual fountain. The sculptor of this classical 19th Century fountain decided the water should flow from the pitcher in one hand of the goddess, to the cup in the other. Unfortunately, the water was not turned on during our visit, so I didn't get to see it in action. It would have made an interesting photo with the light glinting off the stream of water. Ripe oranges dangle from the tree in the background. 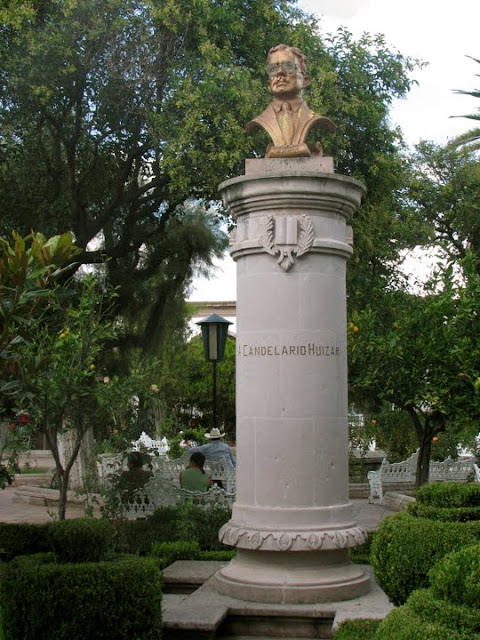 Another unusual statue. Denis, our Irish friend, commented that he had never seen a statue with glasses. Neither had I, until now. Candelario Huizar, shown above, was a musician and composer born in Jerez. During the Revolution, he was saxaphone player in the brass band of the Division of the North, Pancho Villa's army. After the war, he furthered his musical studies and became famous for melding Mexican folk music into classical music forms, in the process writing four symphonies. Huizar is not the only great artist celebrated in Jerez. While I was browsing around the plaza, friendly local cab drivers accosted me and asked if I knew that poet Ramon Lopez Velarde was born here. I thanked my stars that I had done a little research, because they were suitably impressed that a visiting Gringo would know about Velarde, who is considered Mexico's greatest poet. I seriously doubt that if I stopped a random American on the streets of the US, he or she would be able to name a great American poet. Mexicans are very proud of their culture, and should be. 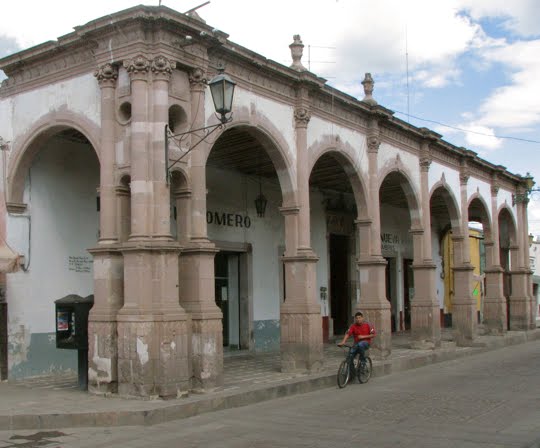 Portales shade the walkway along one side of the street facing the Plaza. Portales have an ancient history. 500 years ago, Phillip II of Spain (the same one who sent the Armada against Elizabeth I of England), decreed that Mexican plazas should all have these covered walkways. His intent was to provide shelter from rain and scorching sun to those who wished to conduct business around the plaza. A rather enlightened decree, I thought. 500 years later, old portales like these can be found everywhere in Mexico. 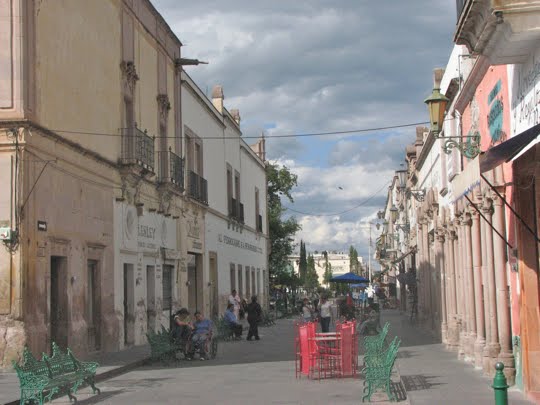 Pedestrian-only street, near the Plaza. More Mexican cities and towns are designating streets around plazas to be auto-free, a practice I welcome. Here, Jerez officials have moved wrought-iron benches out into the street. The big fiesta of the year is called El Festival de Primavera (Spring Break) during Easter Week. Jerez is famous for its Spring Break Charreadas (rodeos) with traditional dances, horse races and other cultural activities. On Holy Saturday, effigies of Judas are burned, followed by a huge Desfile de los Charros (cowboy parade). This is another aspect of Jerez that brought it the Pueblo Magico designation. 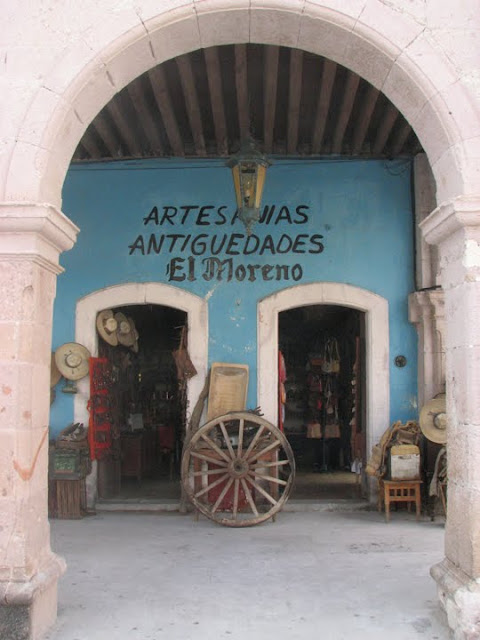 Arteseanas y antiguidades. Folk art and antiquities are the goods this store boasts of in its sign. I spotted this store early in our visit and made sure to stop by before we left. While most of the goods inside were the usual tourist knick knacks, there was quite a selection of old harnesses, bits, bridles, and other antique horse equipment, along with well used sombreros and serapes. 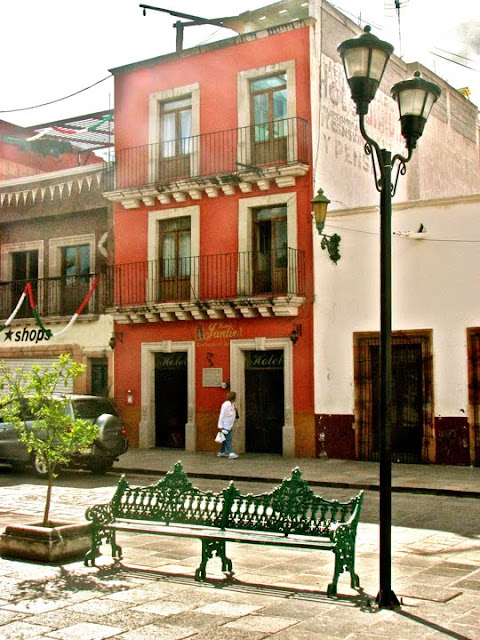 We selected the Hotel Jardin as our lunch spot. The hotel faces the Plaza and provided an excellent and very inexpensive lunch. Almost immediately we were approached by a friendly man who turned out to be a Mexican-American guest at the hotel, down visiting family. During lunch, we were serenaded by a group of wandering musicians. The rooms at the hotel were cozy and comfortable-looking, and also very inexpensive. When we visit the area again, we intend to try out the Hotel Jardin. 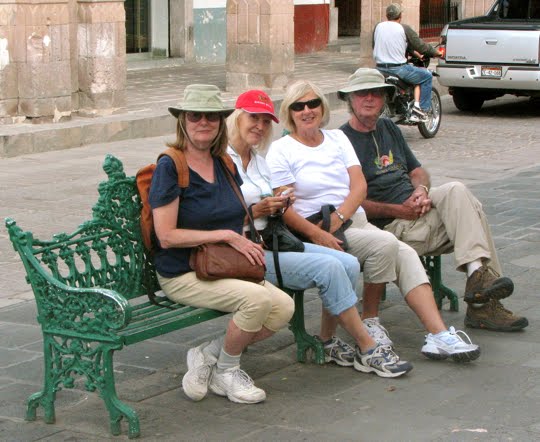 An international lineup. From the left, Carole (US), Verena (Germany), Julika (Germany), Denis (Ireland). The geographical mixture of our group turned out to be very interesting and entertaining, as our different cultural backgrounds interacted with the Mexican culture we were encountering.

This completes Part 6--the last part--of my Zacatecas series. I hope you have enjoyed Jerez and the rest of our Zacatecas adventure. My next posting will jump back a couple of months to the Corn Harvest Fiesta we attended on Raul's farm south of Lake Chapala.

As always, I love hearing from people. If you'd like to respond, you can leave a comment in the section below. If you want to ask a question, please leave an email address so I can respond.