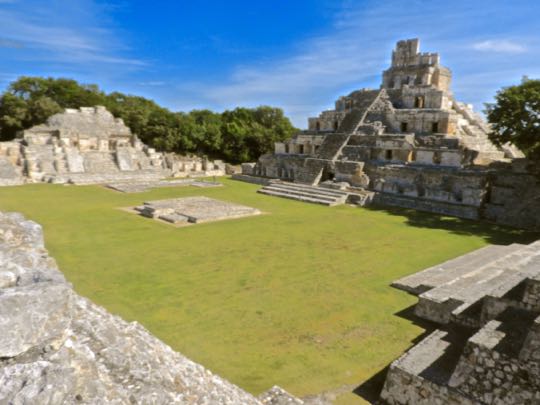 In the photo above, the center of the plaza contains the Solar Platform, from which Maya priest-astronomers observed the movements of the sun. The North Temple is in the upper left, while the Pyramid of the Five Levels can be seen in the upper right. The steps of the Temple of the Moon are in the lower right.

In the Maya Cosmos, each of the four cardinal directions held closely intertwined religious and astronomical meanings. East, the direction of the rising sun, was the most important and so the Great Acropolis occupies the eastern side of Edzná's Main Plaza. Correspondingly, the east side of the Acropolis' platform contains its most important structure--the Pyramid of the Five Levels. 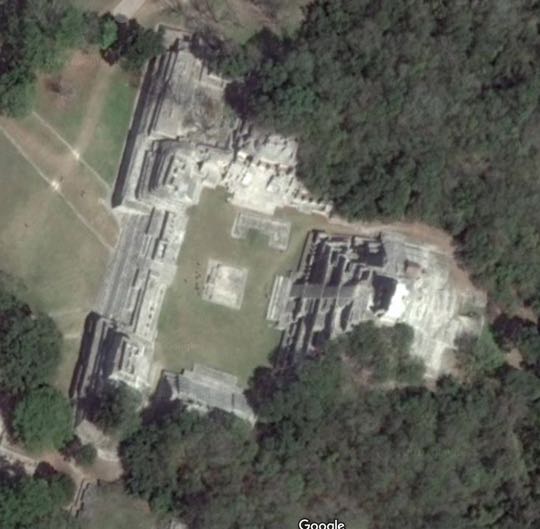 Satellite view of the Great Acropolis. In this photo, north is toward the top. The Southwest Temple, from which I took the previous photo, is located in the lower left corner. The Main Plaza of Edzná is to the west (left). All of the temples and pyramids that form the four sides of the Acropolis' face into its plaza, at the center of which is the Solar Platform.

The north side of the plaza is occupied by the North Temple, which faces the Temple of the Moon on the south side. The east side of the Acropolis is dominated by the Pyramid of the Five Levels. 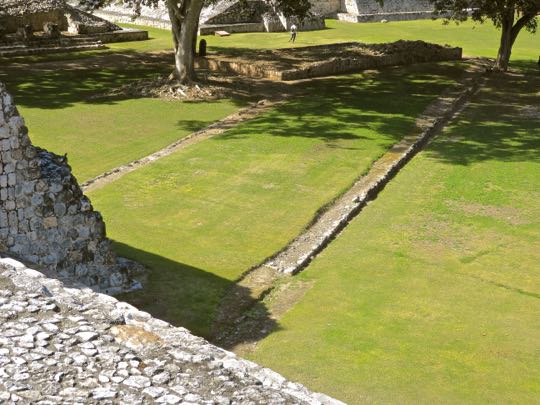 Sacbe leading from the south side of the Great Acropolis to the Ball Court. The two lines of stones seen above are the edges of the road. Sacbeob (the plural of sacbe) were constructed with stone blocks surfaced with limestone stucco. Often they were raised as much as 80cm (2.6ft) above ground level, particularly when crossing swampy areas. The white limestone stucco gave the roads their name. The goddess of the sacbeob was Ix Chel, who was sometimes known as  "she who walks the white road."

Some of these roads (like the one above) were used as processional ways connecting ceremonial areas within a city. Other sacbeob connected one city with another. The longest sacbe in the Yucatan Peninsula is 100km (62mi) long. It connects the ancient city of Cobá in the state of Quintana Roo to Yaxuna in the state of Yucatan. Inter-city sacbeob served both to aid economic activity and as an expression of elite power. 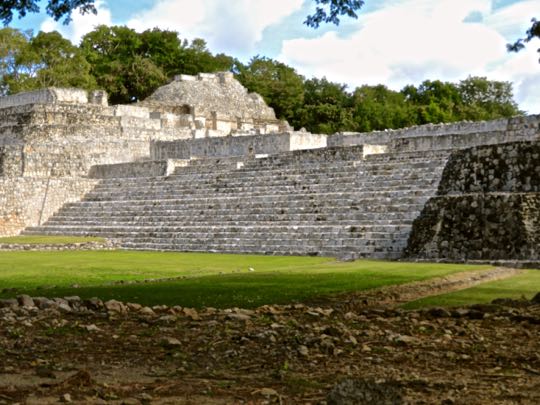 View of the Great Staircase from the Main Plaza. The top of the North Temple looms against the trees in the background. This west-facing staircase was designed to impart a sense of awe. Those who were permitted to ascend it faced the rising sun as they entered the sacred precinct. However, this may not have been the only entrance to the Great Acropolis. There is an un-excavated pile of rubble on the north side of the platform that archeologists suspect may conceal another stairway.

The platform stands 8m (26ft) high and measures160m (525ft) on each of its four sides. It was a major engineering achievement on its own, requiring tens of thousands of man-hours. It should be remembered that everything in the ancient Maya world had to be built with tools of wood and stone and without the help of draft animals or the use of the wheel. 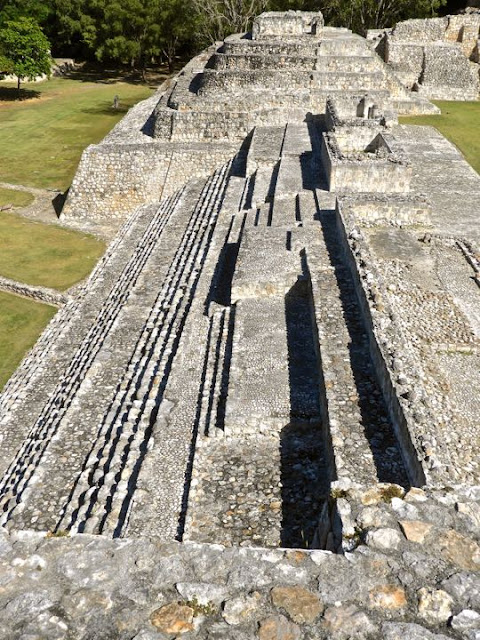 View of the Great Staircase and the Northwest Temple from the Southwest Temple. The Great Staircase is composed of four sets of steps. The first three sets have five steps each, separated by wide landings. The top set of steps is narrow and passes between structures that line the top of the staircase. The small, rectangular structure just north of the top of the stairs is the Temazcal. 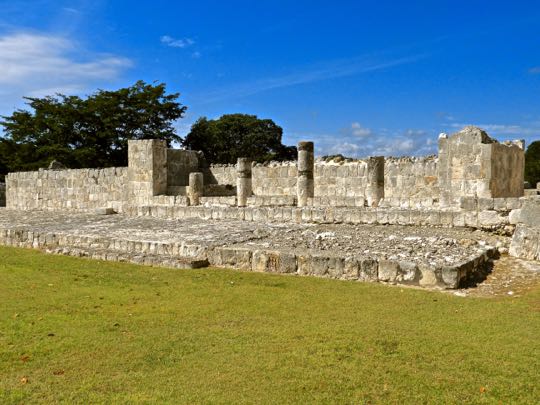 The Temazcal played an important part in the Acropolis' ceremonies. A temezcal is a steam bath, or sweat lodge. It was used to purify the bodies of those who intended to make offerings at the temples or to officiate at ceremonies. Upon reaching the top of the stairs, but before entering the Acropolis' plaza, priests would enter the Temazcal through its colonnaded terrace and then turn left into the low entrance of the sweat room. 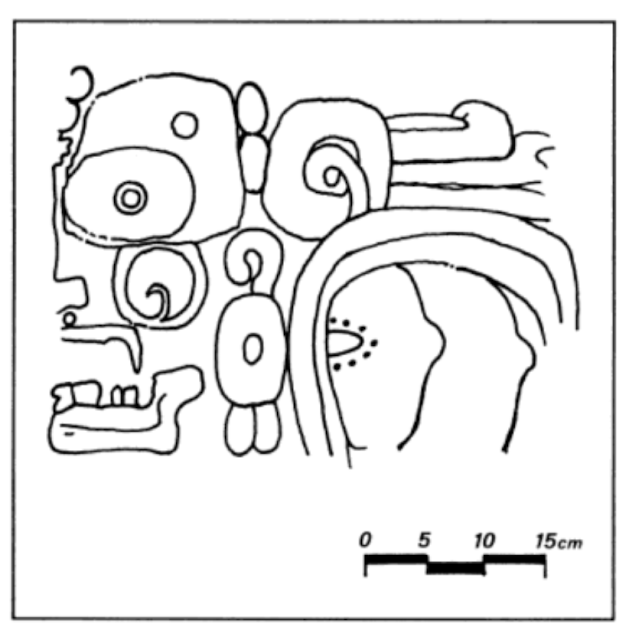 Temazcal decoration. This drawing of a relief carving shows the profile of a god with the flesh stripped away from the lower jaw. It is accompanied by a glyph indicating pictuns, or cycles of 360 days. Although the carving was found in the Temazcal, it appears to have come from a monument somewhere else in Edzná. Archeologists know this because the style of the glyph is from the Classic era but the Temazcal was not built until the Post-Classic. They suspect that the carving was placed here for purely esthetic reasons, unconnected with any calendric purposes. Re-using decorative elements was a common practice in the ancient world. 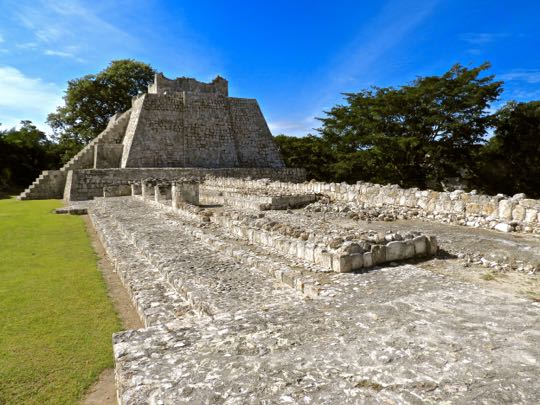 The Northwest and Southwest Temples 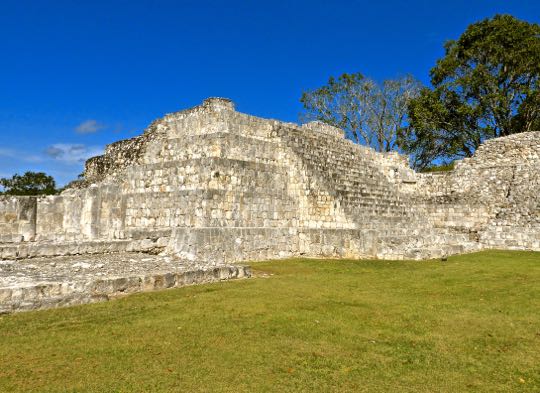 The Northwest Temple has five stepped-levels with a staircase on the east side. Although it has the same number of levels as the Pyramid of the Five Levels, the Northwest Temple is dwarfed by the larger structure. The columns of the Temazcal can be seen in the left center of the photo. It is unknown what god or gods may have been worshipped in the three rooms at the top.

Certain architectural elements, including a Petén-style rounded corner, indicate that the Northwest Temple was originally built during the Early Classic period (300-600 AD). However, modifications were made during the Late Classic era (600-900 AD). 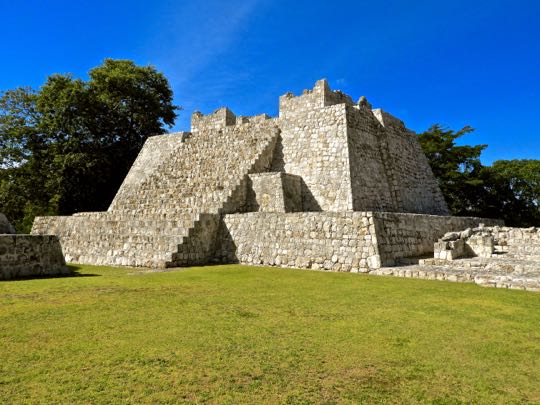 The Southwest Temple was also erected during the Early Classic period. The overall design of the temple shows the Petén architectural style prevalent in that era. There are four small rooms at the top that were probably built during the Late Classic period.

This completes Part 2 of my Edzná series. In my next posting, I will continue with my examination of the Great Acropolis, focusing on the Pyramid of the Five Levels, the North Temple and the Temple of the Moon. I hope you have enjoyed this posting and, if so, please leave any thoughts or questions in the Comments section below.

If you leave a question in the Comments section, PLEASE leave your email address so that I can respond directly.