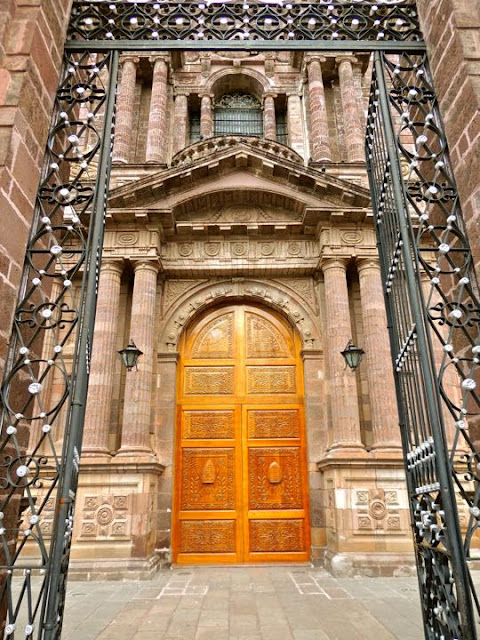 View through the entrance gate of the Old Cathedral. Back in Zamora after our visit to Lago de Camécuaro (see Part 2), Carole and I decided to visit one of the city's two co-cathedrals. The Catedral de la Concepción Inmaculada is located on the east side of the Plaza de Armas. It shares an intersection with the Presidencia and the Mercado Morelos. How the city ended up with co-cathedrals is a story of revolution and war that I outlined in Part 1 of this series. To locate this church on a Google map, click here. 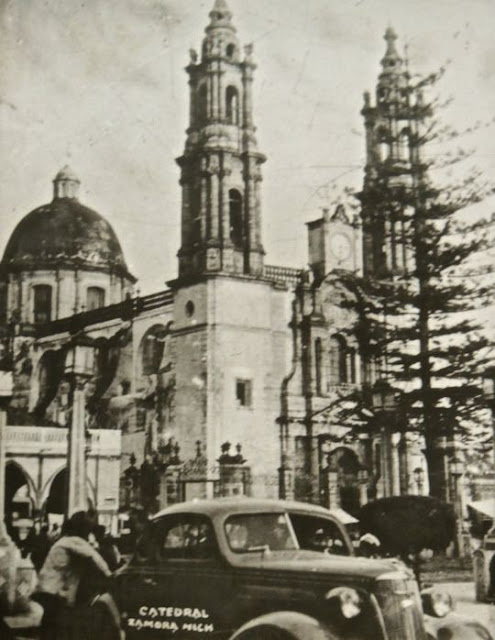 The Cathedral as it looked in the 1930s, approximately one hundred years after its completion. Originally built as a parish church, construction began in 1832 and finished in 1838. The famous architect Francisco Eduardo Tresguerras designed it in the Neo-Classical style, with touches of Baroque. Tresguerras was an artist and sculptor as well as an architect, and built churches and palaces for the elite all over Mexico. In 1811, shortly after the beginning of the War of Independence, the architect was arrested by the Spanish because of his insurrectionist sympathies. Tresguerras apparently survived the experience without ill effect and continued his architectural work over the next two decades. This church was one of his last works because he died in 1833, a year after construction began. 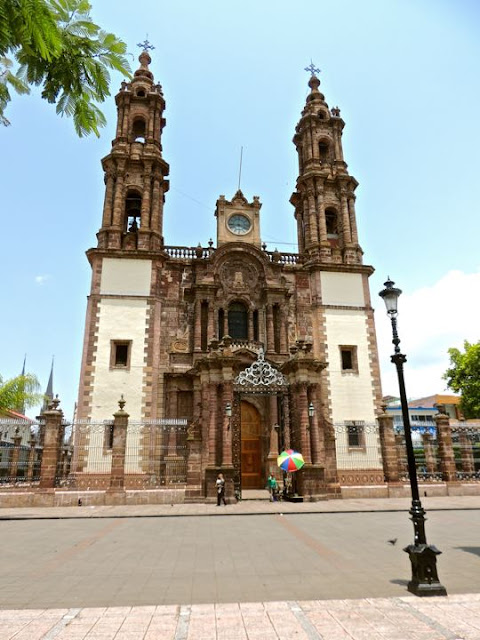 The Cathedral as it appears today. The only difference that I can detect from the previous photo is the area of the facade surrounding the main entrance. In 1863, twenty-five years after its completion, Pope Pius IX created the Diocese of Zamora. The Concepción Inmaculada church was selected as the temporary seat for the new Bishop José Antonio de la Peña y Navarro. Zamora's first bishop held that position through the years of bitter struggle against the French Occupation of Mexico. During the Occupation, the leadership of the Church was generally supportive of the French-installed Emperor Maximilian, although it is not clear where Zamora's bishop stood on the issue. De la Peña served until his death in 1877, shortly after Porfirio Diaz came to power. 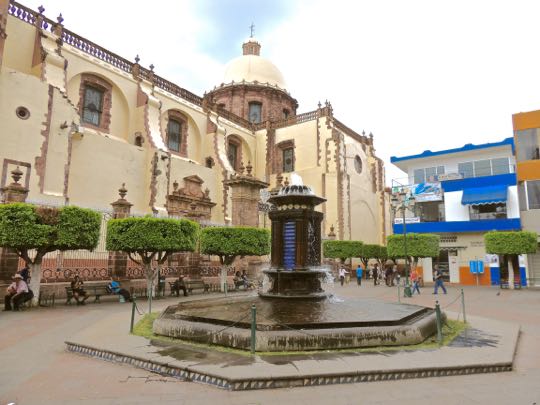 A small plaza with an unusual fountain separates the Cathedral from the Mercado Morelos. I have never seen a similar fountain in any Mexican plaza I have visited. The stone-paved plaza is an extension of the Plaza de Armas. This view of the north side of the Cathedral shows the series of buttresses supporting the wall and the Neo-Classic dome. 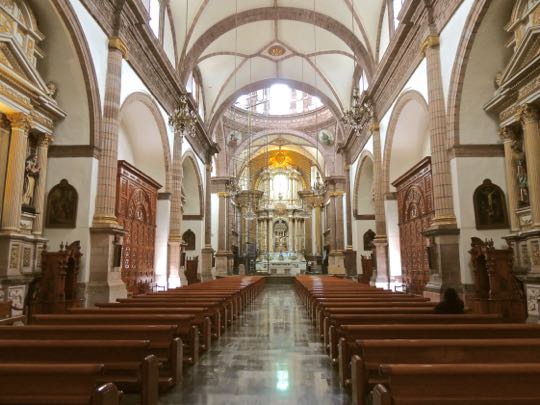 The Cathedral's interior forms a single cruciform nave with numerous alcoves and retablos. The Spanish word nave translates as "ship" or "vessel". The nave of a church is a long chamber, usually covered by an arched ceiling resembling the hull of an upturned boat. The word cruciform means "shaped like a cross". Therefore a cruciform nave is one in which the long chamber has two short chambers extending perpendicularly from either side, thus shaping a cross. The ends of the shorter chambers usually contain small altars backed by retablos. The church's main altar stands at the far end of the nave. 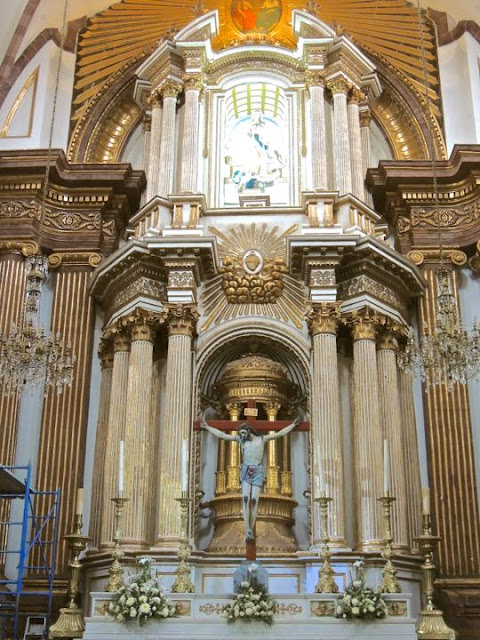 The Cathedral's main altar follows Neo-Classical style. This can be seen in the tall Corinthian columns topped with elaborate capitals. The columns support the entablature which is covered by floral designs. This adds a touch of Baroque. Neo-Classical style became popular in the 18th and 19th centuries in reaction to the perceived emotional excesses of Baroque. During this so-called Age of Reason, social elites believed that classic Greek and Roman art and architectural styles should be emulated because those ancient societies were supposedly based on reason. 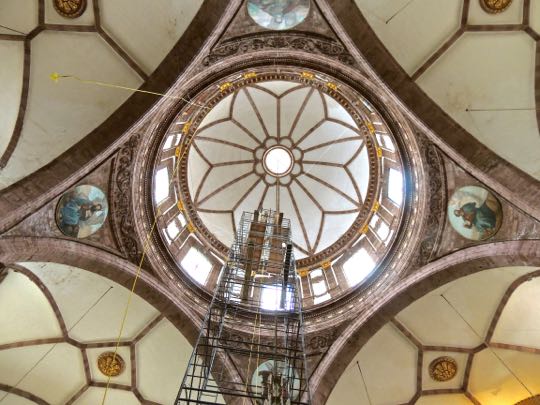 The dome covers the area where the cruciform arms connect to the nave. The dome is supported by arches and, in the triangular spaces where the arches meet, circular portraits of saints appear. Figures shown in this position are nearly always the four main Doctors of the Church: St. Augustine, Pope Gregory I, St. Jerome, and St Ambrose. These four were seminal thinkers in the development of the central doctrines of the Catholic Church. The purpose of the scaffolding was to allow painting and repairs to the dome. These old buildings require constant care to prevent deterioration. 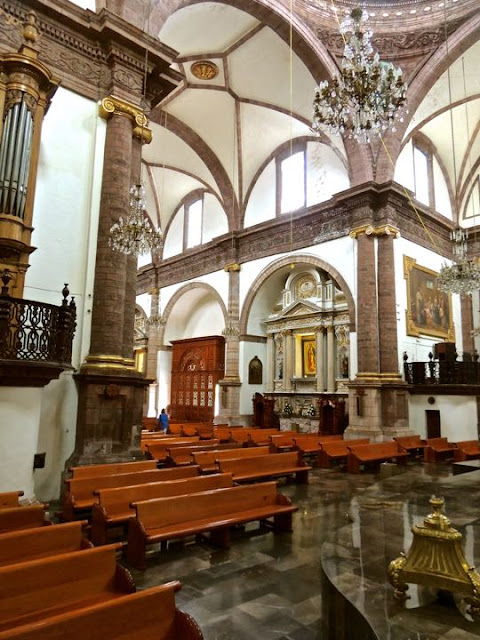 View of the nave from the right-hand cruciform arm. The Cathedral is lit at night by the many crystal chandeliers hanging from the ceiling. In the upper right, you can see one of the large, gilt-framed paintings which decorate the church interior. In the center is an alcove with a retablo containing a painting of the Virgen de Guadalupe, a ubiquitous figure in Mexican churches. 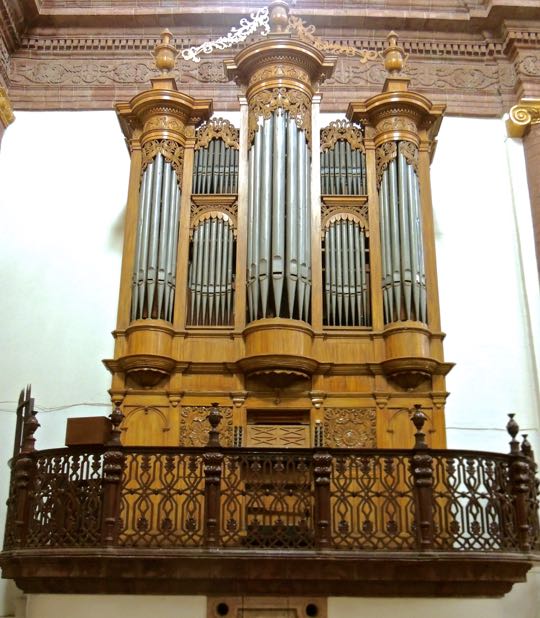 A massive pipe organ stands on a balcony overlooking the right-hand chamber. Pipe organs were developed in the Middle Ages and had been in existence for 300 years or so when the Spanish arrived in the New World. They were principally found in religious contexts. In Viceregal Nueva España, artists sometimes employed an image of an organ as a kind of abbreviation for the Church. The thunderous sound such an instrument could create produced a sense of awe among parishioners that church leaders found very satisfactory. 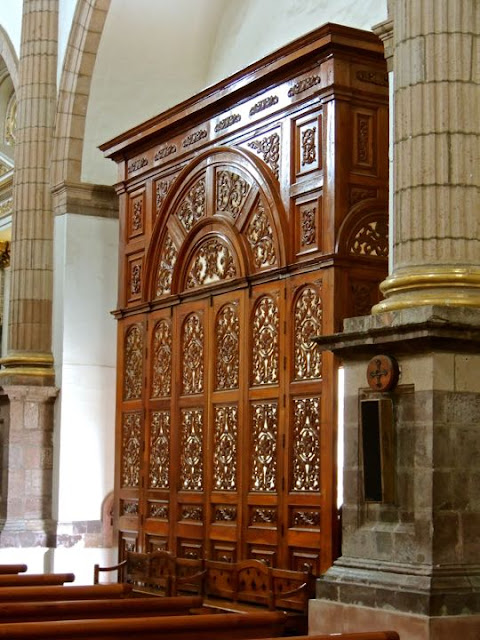 A beautifully carved wooden screen covers a side door. This sort of screen is very common in Mexican churches. Its purpose is to allow entrance to the nave while creating a sense of separation from the noise and profane activities of the outside world. The easy availability of wood from Michoacan's heavily-forested mountains makes magnificent creations like this possible. 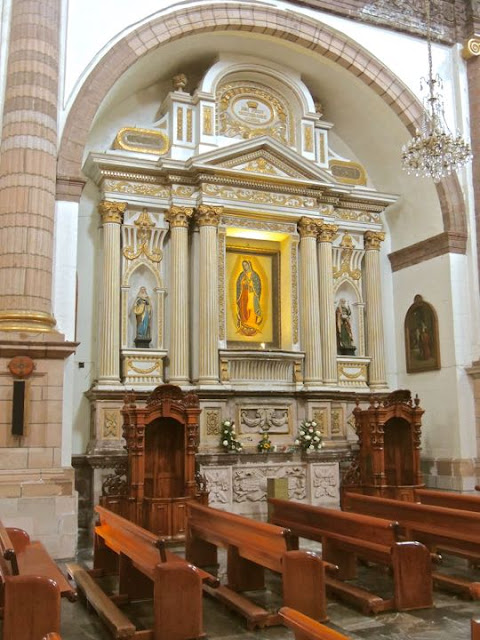 An alcove on the left side of the nave contains a retablo featuring the Virgen de Guadalupe. Two female saints fill niches on either side. Bracketing the altar at the base are two carved wooden confessionals. The retablo follows the Neo-Classical motif of the rest of the church. 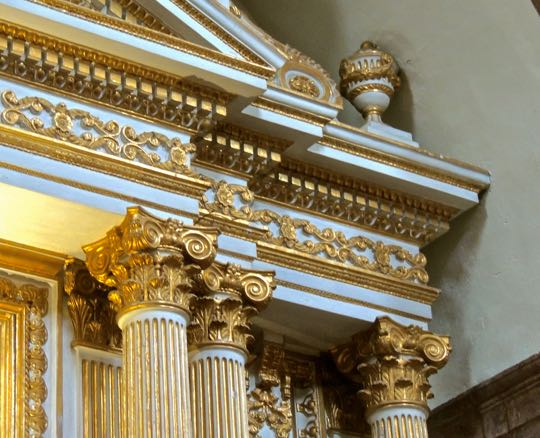 Elegant Corinthian columns support the floral entablature of another retablo. The Corinthian-style column was developed in the 5th Century BC by a Greek sculptor and architect named Callimachus. However, the style was not widely utilized until 146 BC, when the Romans conquered Greece following the climactic Battle of Corinth. The Romans quickly adopted the Corinthian column along with many other aspects of Greek culture. After the Roman Empire fell to waves of barbarian invaders in the mid-5th Century AD, the people of the Dark Ages were much more inclined to build crude defensive fortifications than stately Corinthian columns. Classical Greek and Roman architectural styles effectively disappeared from Western Europe, except those found among the ancient ruins. They were eventually revived during the 18th Century, when there was a renewed interest in all things Greek and Roman. The Neo-Classical style was approaching its peak of popularity in the 19th Century when this church was constructed. 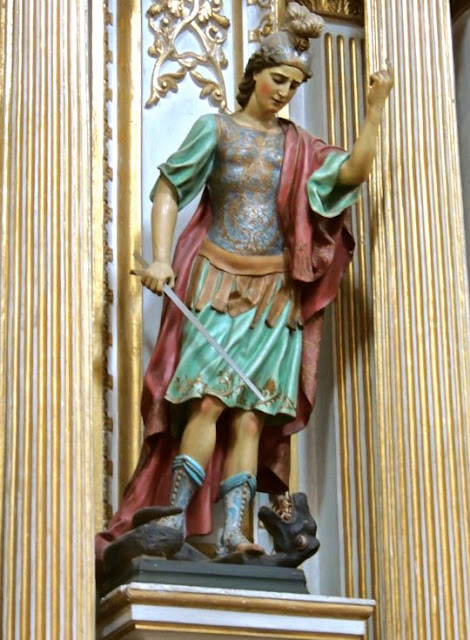 The Archangel Michael, sword in hand, tramples on a dragon/serpent representing Satan. Michael is recognized and revered by Catholicism, Judaism, and Islam alike. According to Catholic tradition, a great civil war broke out in Heaven between God and the dissident angels led by Satan. Archangel Michael commanded God's army. After Satan and his followers were defeated, they were expelled from Heaven and fell to earth, thus creating the expression "fallen angels." Ever since, as the story goes, Satan has tried to lead humanity away from the "true path" and into the ways of evil. Michael is nearly always depicted as an armed warrior tromping upon his defeated enemy. 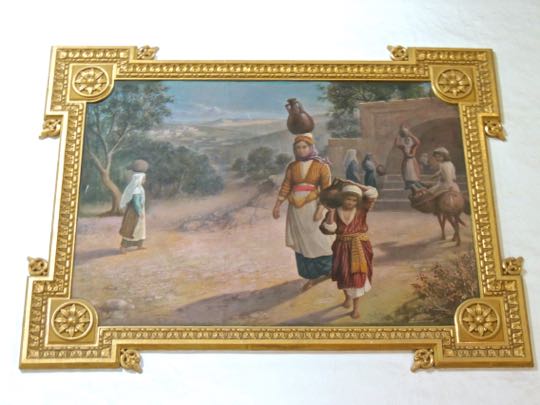 A biblical scene hangs high upon the nave's walls. I was interested in this painting because, with only slight modifications, it could also depict scenes common in Mexico from the colonial era right up through the early 20th Century. In fact, in the remote Mexican villages of today, a similar scene would not rate a second glance. Women in such places still wear aprons and cloth head dresses. Many small indigenous girls dress as miniature versions of their mothers. Water and other goods are still carried as you see above. The young boy riding the burro on the right would be a very common sight in rural 21st Century Mexico.

This completes Part 3 of my Zamora series. I hope you have enjoyed it and, if so, that you take the time to add any comments of questions to the Comments section below. However, if you leave a question, PLEASE leave your email address so that I can respond.