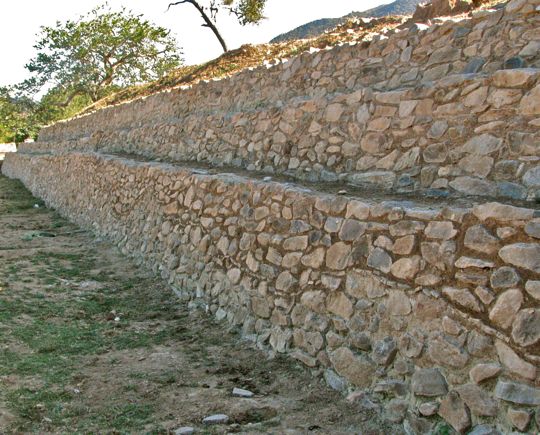 Palacio de Ocomo is another of Western Mexico's unique archaeological sites. Above, you can see three successive layers to the walls, the most recent running along the bottom. This wall is a staggering 125 meters (410 ft.) long, and the other 3 sides are of equal length. Arguably, Palacio de Ocomo is the largest palace of its kind in all of Mesoamerica. There are some claims that the palace of Moctezuma at Tenochtitlán was larger, but since much of that structure is buried under modern Mexico City, this cannot be verified. Archaeologists used to consider Western Mexico a backwater lacking in sites worth investigation. However, the Etzatlán area possesses three kinds of archaeological remains that are unique to Mesoamerica: the Shaft Tombs (Part 5 of this series), the circular pyramids and huge ball court at the Guachimontanes (Part 6), and the vast Palacio de Ocomo. In my research on Etzatlán, I had read about archaeological projects under way in the area. Accordingly, I emailed the local Oficina Turistica to arrange a visit for my party during our two-day adventure. The tourist office provided a guide to Palacio de Ocomo and persuaded the chief archaeologist to give us a tour. The Palacio is located in the the pueblo of Oconahua, about 10.6 kilometers (6.6 mi.) west of Etzatlán, to the the south of Highway 4. For a Google map showing Etzatlán and Oconahua, click here. 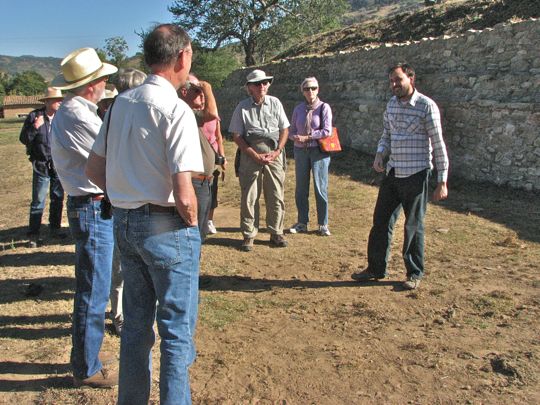 Our group got an excellent tour from the young archaeologist in charge. Sean Monte Marquez Smith (far right) obligingly walked us through the entire site. It was well he did. Although American archaeolgists Phil Weigand and his wife Acelia first alerted the scientific world about Palacio de Ocomo in 1958, it was not until 2007 that any significant work began. At present, the only part of the site that has been substantially restored is the long north wall, seen above in the background. Some exploratory holes have been dug, and workers have filled many sacks with pottery shards. Without a knowledgable guide such as Sean, it would have been difficult to appreciate the site's significance. The ancient city covered 500-600 hectares (1235-1452 acres) on a rolling plateau at the base of steep mountains. The Palacio was a huge complex with in the city, encompassing about 50,000 cubic meters (164,042 cubic ft.). 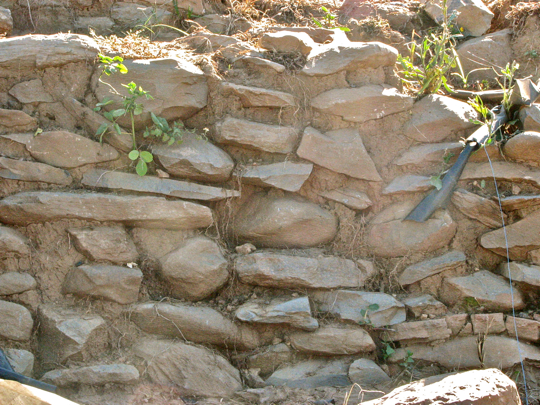 Part of the uncovered but, as yet, unrestored north wall. An uneducated eye would easily pass over something like this. In the late 1950s, local residents told Weigand about old ruins they called "Ocomo", and when he investigated he was intrigued by the site's unusual size. While farming their lands and building their houses, the locals had turned up many artifacts, including polychrome vessels and semi-precious turquoise jewelry. Tests showed that the turquoise originated in Cerrillos, New Mexico, near Santa Fe. This clearly indicates that the ancient people of Palacio Ocomo were involved the Mesoamerican trade network that extended all the way from the US Southwest to Honduras. 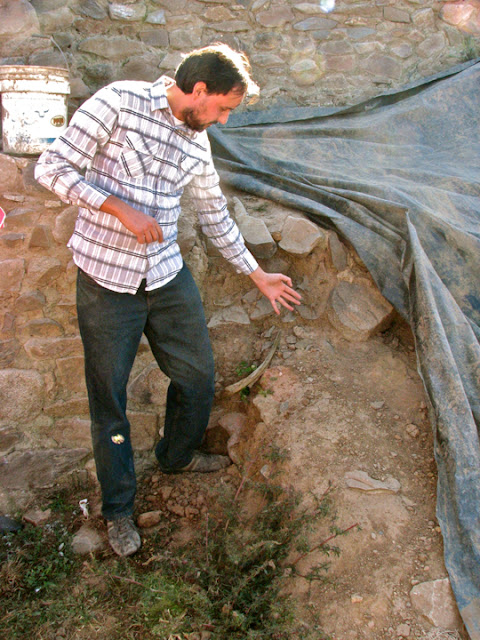 Sean explains how a dig proceeds. Sean is an engaging and highly intelligent young man whose work is sponsored by a university in Michoacan. His father is American and his mother is Mexican, so he speaks both languages well. Archaeology is a science that requires great patience and attention to detail. Workers sometimes use toothbrush-sized implements to painstakingly remove the earth from artifacts. Looters, by contrast, are only interested in what they can sell. Their crudely-used shovels and picks often destroy the most important aspects of a site. The items they recover lose much of their meaning when removed from the context. Fortunately, most of Palacio Ocomo is still buried, and its obscurity has left it largely unlooted. Local people were suspicious of the intentions of Weigand and other scientists at first, and it took almost 50 years for archaeologists to get permission to proceed. 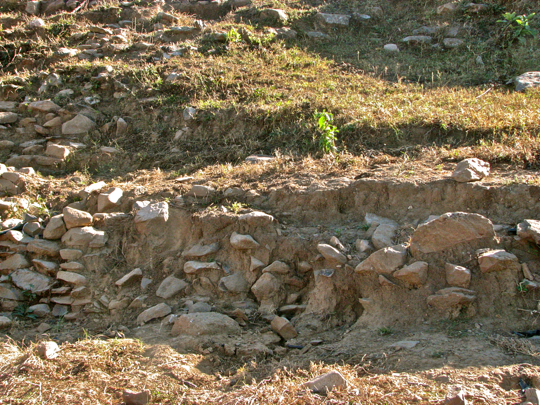 The further west we moved along the wall, the more dilapidated it became. According to the local people, there used to be many stelae (upright blocks of carved stone) in the area. Some had carvings showing feathered head dresses. However, in 1890 a Franciscan priest appeared and denounced the stelae as works of the devil. He ordered that they be destroyed and the remains thrown in the local creek. Residents managed to keep some artifacts safe in their homes, but Weigand found fragments in the creek that verify the stories about the priest. The outside walls shown above had an adobe core faced with stone which may have been plastered or stuccoed. The sides of the walls facing the courtyard may have either been plastered or finished with cantera stone. 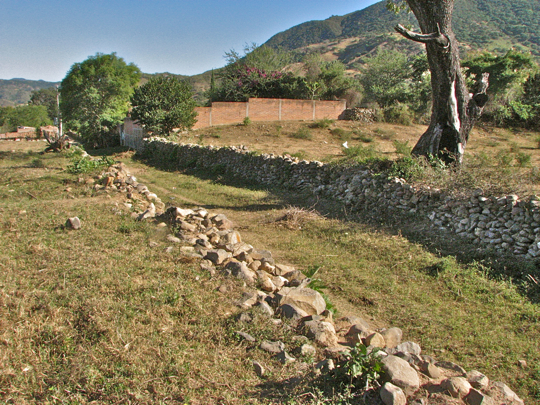 A sunken lane was built by farmers right through the main Palacio site. Some of the stones in the walls lining the road no doubt came from ancient structures just under the earth. So, what went on here? In ancient times a palace like this was called a tecpan. Similar--but smaller--palaces have been found in other areas of Mesoamerica. Moctezuma's tecpan was extensively described by Hernán Cortés in letters to the King of Spain. Because the overall outlines of Palacio de Ocomo so closely resemble these other tecpans, archaeologists speculate that the activities conducted at the Oconahua site would have been similar. Behind the thick stone walls was a large sunken courtyard. Around the courtyard would have been rooms for the ruler and his wives and children, as well as for the nobility and priestly class who administered the temporal and religious affairs of the kingdom. Historians, philosophers, and poets would also have used the maze of corridors and meeting rooms for their activities. The royal treasury would have been kept here, and other rooms would have contained weapons. Still other spaces would have been maintained for the various palace functionaries and for visitors. 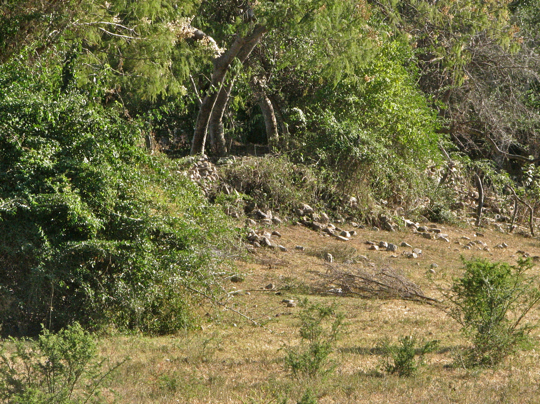 A heap of loose stone covered by vegetation conceals more ruins. Sean confirmed that this was an unexcavated Palacio structure. When intact, structures like this would have been stuccoed and painted beautifully. Palacio Ocomo flourished between 500-1100 AD. At its peak, the Palacio and its environs may have contained as many as 8,000 people. The present population of Oconahua is 2000. The civilization that built the Palacio and its surrounding city was probably the same one which caused the downfall of the Teuchitlán culture (see Part 6). Archaelogists note that construction suddenly stopped on circular structures like those of the Guachimontones. Thereafter, only squared structures like those found at and around Palacio Ocomo were built. The abruptness of the change suggests a conquest. 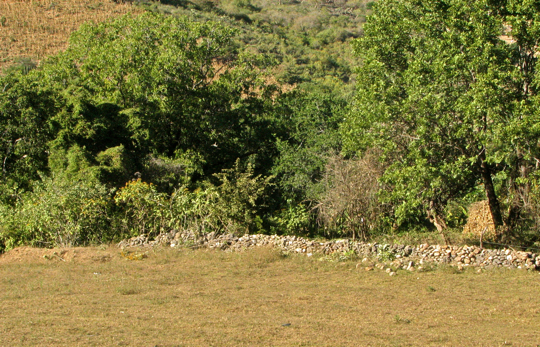 Below the north wall, a broad, flat plaza stretches out, bounded by a stone wall. The wall was probably built by post-Conquest farmers and contains many stones from the ancient ruins. Beyond the stone wall is the arroyo in which the stelae fragments were found. On the other side of the arroyo, rolling hills rise up. On these, the ancients built their homes and planted their fields. The archaeologists have been digging in four sites within about 300 meters (984 ft.) of the Palacio. At least one of the sites contains ancient homes around a sunken courtyard. 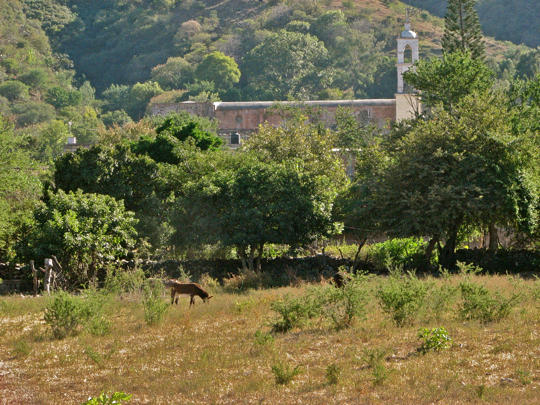 The foundations of an ancient pyramid lie underneath the church above. As was their usual practice, the Spanish dismantled the pyramid and used its stones to build the church. Other ancient buildings are not available for excavation because residents homes or small stores are built over them. Palacio Ocomo, on the other hand, is largely located on the pasture land you can see in the foreground. Notice how the spurs of the mountains in the background come down to the very edge of the town. A burro grazes contentedly on pasture covering the south side of the Palacio. The wall in the background probably contains many stones retrieved from the ancient structure. The people who built the Palacio were fairly advanced for their time. They used the newly-introduced bow and arrow and worked with copper. They also seemed to have discovered how to work iron. In this they were more advanced than the later Aztecs who had no knowledge of iron at the time the Spanish arrived. 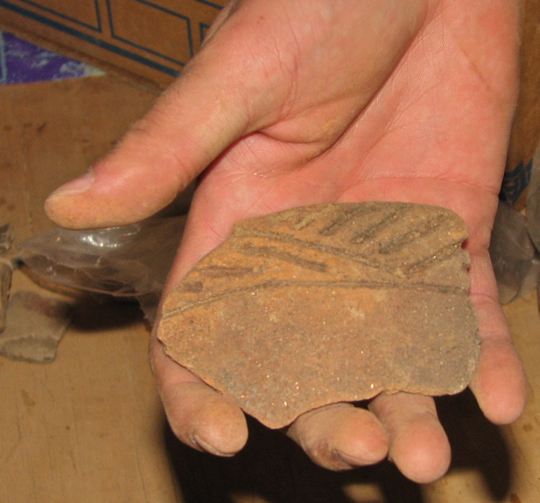 Sean showed us a broken piece of ancient pottery recovered from the site. There were several decorative styles but all of it was geometric in design. Numerous bags of potsherds were stacked inside the vacant house the archaeologists use as a workshop. On a rustic plywood table, he spread out a selection for us to examine. 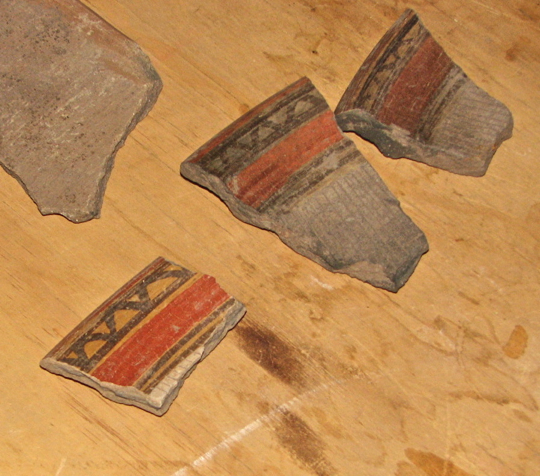 Polychrome potsherds. It was not clear to me whether these pieces came from the same or several different pots. However, the design was attractive and the paint was still bright and colorful after 1000 years of burial. Plans for the Palacio Ocomo include planting a screen of trees around the site to maintain its sense of seclusion. There is also talk of changing the approach to the site to create a more dramatic entrance. While most of the Palacio is still underground, I still found it fascinating. As an active archaeological dig, new discoveries are turning up regularly. The archaeologists are using high technology such as ground penetrating radar to identify the places to dig, and have already detected a possible grave site. 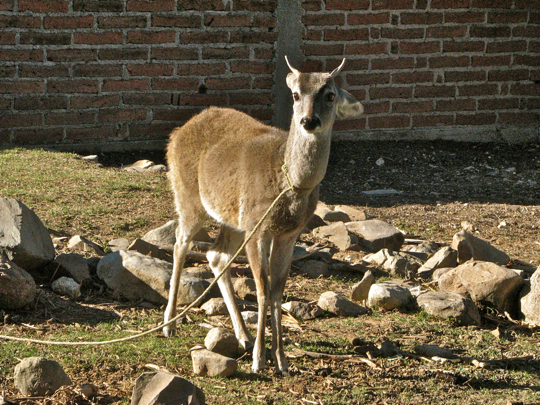 This pet deer appeared to be the mascot of the site. Its tiny antlers indicate that the deer was apparently not much older than a fawn. The creature seemed a little anxious about the sudden flood of unfamiliar people as my 12-member party filed through. The mountains that rise immediately in back of Oconahua are no doubt thick with such deer. 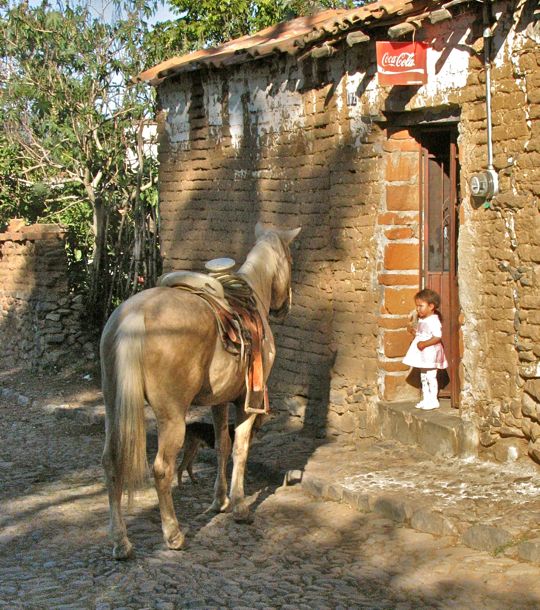 Tot and horse commune on the doorstep of a local tienda. The little adobe store is located right across the street from the archaeologists' workshop. The photographer in me found the scene irresistible. Except for the Coca Cola sign and the electric meter, this had the appearance of something right out of the 19th Century. Much of rural Mexico has that antique feel.

This completes Part 7 of my Etzatlán Adventure series, and brings the series itself to an end. I hope I have given you incentives to visit Etztatlán. As I said in Part 1, the town of Etzatlán, and the area around it, are a largely undiscovered jewel full of things to do and see. I would advise contacting the Oficina Turistico (turismo_etzatlan@hotmail.com) beforehand or when you arrive so that you can arrange for a guide. However, the directions and maps I have provided should allow you to see things on your own, if you so choose. I always appreciate feedback from my blog viewers. If you would like to do so, please use the Comments section below, or email me directly.

If you leave a question in the Comments section, PLEASE leave your email address so I can respond.