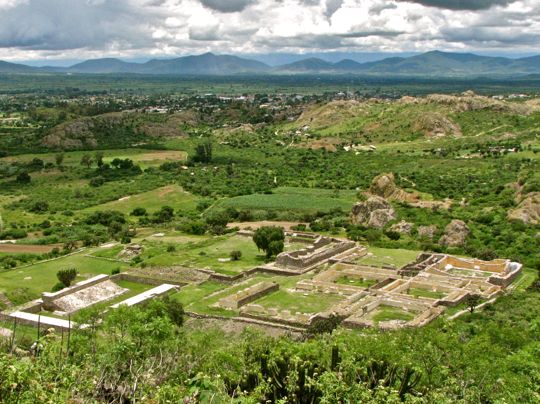 Ancient Zapotec fortress town of Yagul, seen from above. During one of our tours of the Oaxaca area, Carole and I stopped at Yagul. In the lower left is the ball court, and to the right of the court are several open plazas and the remains of a complex of palaces. Stretching off in the distance is Tlacolula valley, one of the three great central valleys of Oaxaca. The nearby Rio Seco supplies water to the area and forms one of the boundaries of the archaeological site. For a map of the area, click here. Yagul lies a short distance north of the road between Oaxaca City and Mitla. Although it has been one of the most- studied of Zapotec and Mixtec sites in the area, Yagul is one of the least-visited by tourists. The consequent quiet serenity added greatly to our enjoyment of the site.  The ruins are open Tuesday through Sunday from 9am-5pm and the entrance fee is $30 pesos ($2.41 USD). Guides are available for $120 pesos ($9.65 USD). 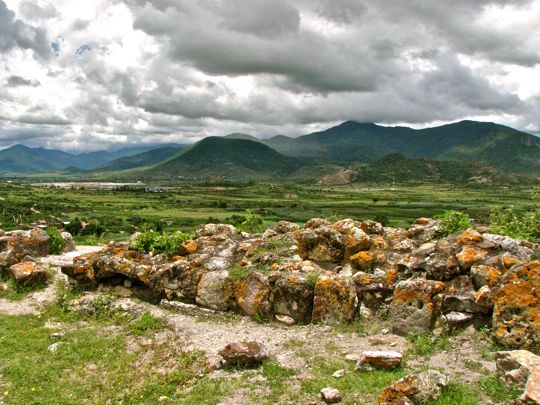 Rubble from the ancient baths of Yagul. The inhabitants seem to have had a strong aesthetic sense. They could lie back in the baths on this bluff above their town and enjoy the view of the lush valley and mountain range beyond. Next to the tub is a shelf-like area where bath items and clothing could have been placed. In August, the time when we visited, the weather was very changeable. Warm sunshine was followed quickly by the rolling dark clouds you can see above. Then, just as quickly, sunshine returned. 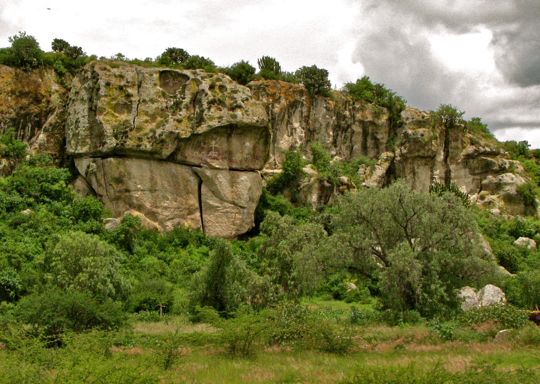 Yagul is set on the highest of several plateaux leading up to a huge stone bluff. The first plateau we encountered on our way up was edged by these cliffs. The stone cliffs and other outcrops in the area provided a ready source of building materials to the ancient Zapotecs, as well as caves for their even-more ancient predecessors. 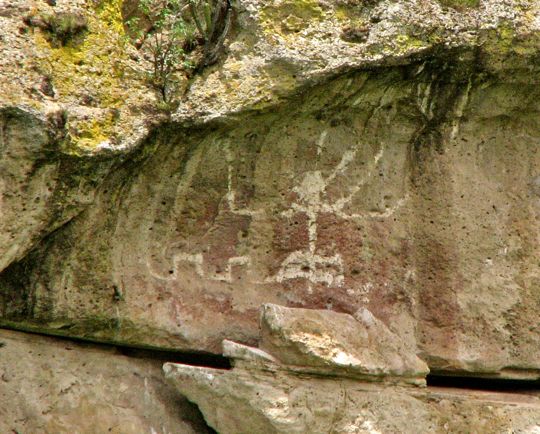 Pictographs on the cliff face long pre-date Zapotec arrival in the area. These pictographs date from at least 3000 BC. However, in the nearby caves called Guilá Naquitz, archaeologists have made extraordinary discoveries. Squash seeds, the earliest known domesticated plant seeds on the North American Continent, were found here. They date to approximately 8,000 BC. In addition, the archaeologists discovered cobs from the earliest known domesticated maize (corn), dating to approximately 4,100 BC. This area of Oaxaca's Central Valleys may well have been the birthplace of agriculture in the New World, although there is still some dispute on this. Between 1,500 BC and 500 BC, the Olmecs from the Gulf Coast appear to have colonized the area. Around 500 BC, the Zapotecs arrived and established dominance over the Olmec settlements. At the time, the Olmecs were rapidly declining as the pre-eminent Meso-American culture. However, their achievements in architecture, astronomy, mathematics, and social organization influenced and shaped every civilization that followed, including the Zapotecs. Early relief carvings, found in the city of Monte Alban and known as the Danzantes, show a people conquered by the Zapotecs who have a definite Olmec appearance. 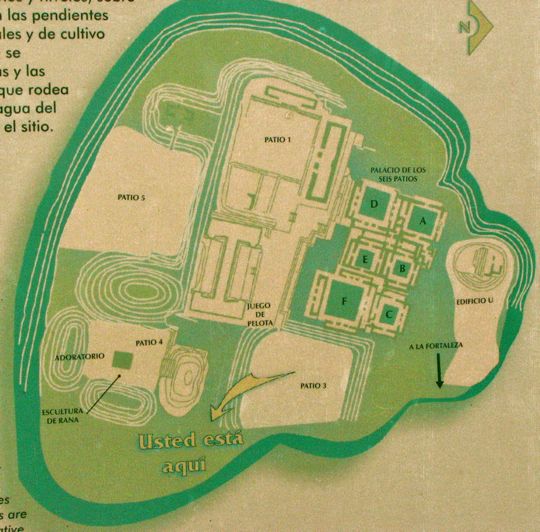 Site map of Yagul. The 4 large plaza areas seen above had religious and ceremonial purposes. In the center of the site, the structure in the shape of a capital "I" is the ball court, always an important feature in Meso-American cities. To the right side of the ball court are a group of 6 small green squares which are patios of the palace complex. On the far right is an oval-shaped area containing the baths at the top and the natural stone fortress on the bottom. The Zapotec name Yagul means "Old Tree". 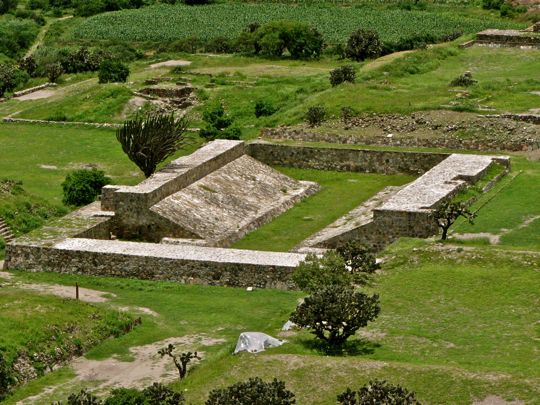 View of the ball court from the fortress on the bluff. In design, this ball court is quite similar to the one found at Monte Alban. Following the Monte Alban pattern, there are no rings set into the sloping side walls as one finds elsewhere. The Yagul ball court is unusual because it is the largest in the Oaxaca area, and the second largest in all of Meso-America, after the Maya ball court of Chichen Itza. While the general area had been inhabited for many thousands of years, Yagul was not founded as a town until about 500 BC, about the same time as Monte Alban. Its life as a Zapotec community closely followed that of Monte Alban. When that great mountaintop city declined, its people moved to smaller communities such as Yagul. However, after a relatively a short period it too declined and then was abandoned sometime after 950 AD. Yagul was re-occupied by the Mixtecs who continued to use it as the capital of a small city-state until the Spanish arrived in 1521. 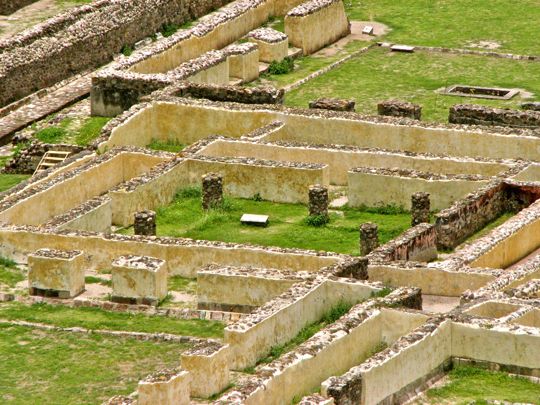 The palace area contains 6 patios, each surrounded by long, narrow rooms. Some of the patios contain the stumps of pillars, like the one above, which may have held up roofs partly overhanging the patios. The palace areas were the most exclusive living spaces in Yagul. The design of the palaces and their patios is unique within the Oaxaca area. 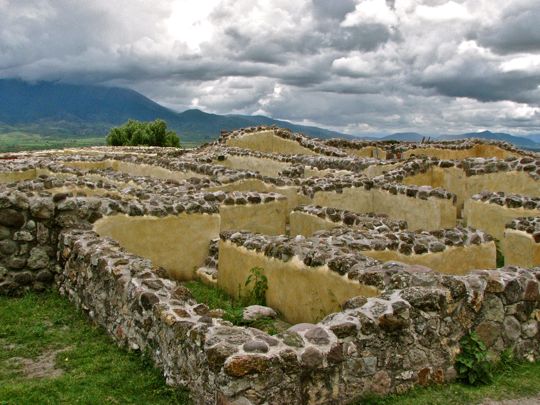 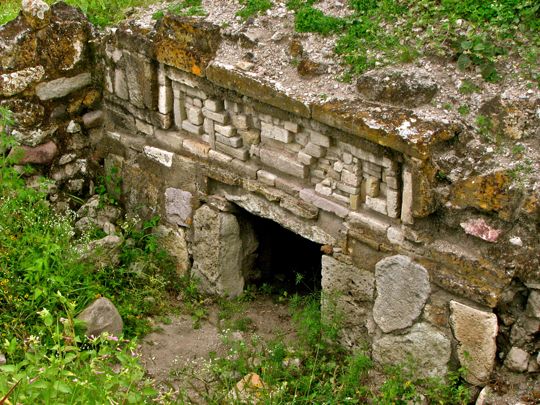 More than 30 tombs have been discovered in and around Yagul. Above, a tomb near the entrance to the Yagul complex. Notice the elaborate stone pattern ahove the entrance of the tomb. This method of decoration closely mirrors that of the nearby Mixtec city of Mitla, indicating that the tomb is from that later era. Mixtec tombs often contained gold and jade jewelry of stunning beauty and fine craftsmanship. Unfortunately, most of the tombs of Yagul were looted centuries ago. 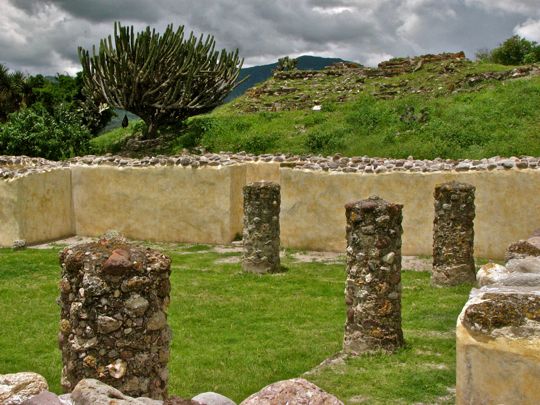 Stuccoed stone walls, and stumps of pillars grace a patio in the palace complex. In the background of this photo you can see the bluff topped by the bath structure seen in the second photo of this posting.  The semi-arid character of the environment is indicated by the large cactus on the upper left behind the wall. 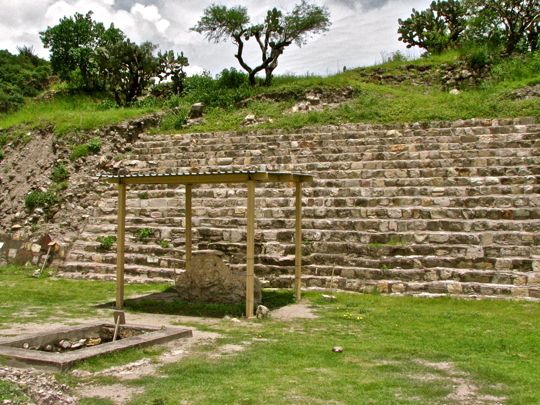 Plaza 4 is surrounded on all sides by steps leading up to temple structures. On the lower left of the photo is the entrance of one of the tombs. Just behind the tomb entrance is a stone altar, covered by a protective roof. 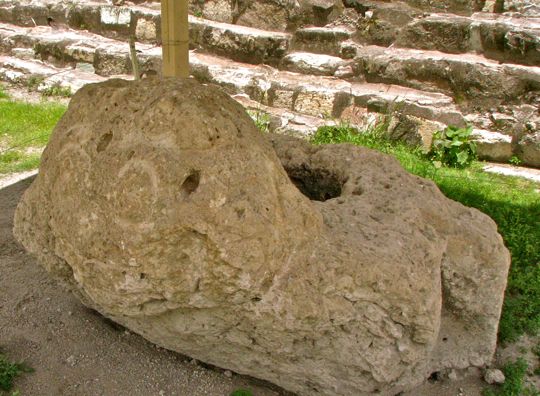 The altar in Plaza 4 is shaped like a frog. The frog is probably related to a water or rain cult. Interestingly, there is a temple at the Maya city of Uzmal also devoted to a frog cult. While there is no specific evidence of a connection, the Zapotecs did have trade relations with the Maya for a long period. 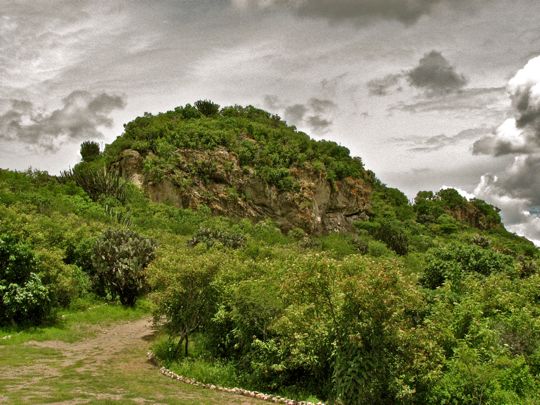 A hilltop fortress looms above the rest of Yagul. The structures on the hilltop are clearly defensive in nature. They may have been built by the Zapotecs to defend against the incursion of the Mixtecs, or by the Mixtecs to defend against the Aztecs centuries later. While this hill does not look impressive to me from this point of view, my perspective changed as we approached. 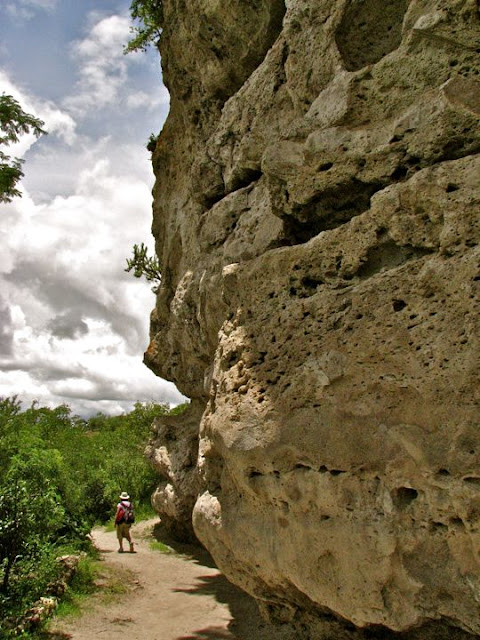 The sheer cliffs surrounding this natural fortress would have been daunting to an invader. Above, Carole wanders along the path at the foot of the cliff, providing a sense of scale lacking in the earlier photo. 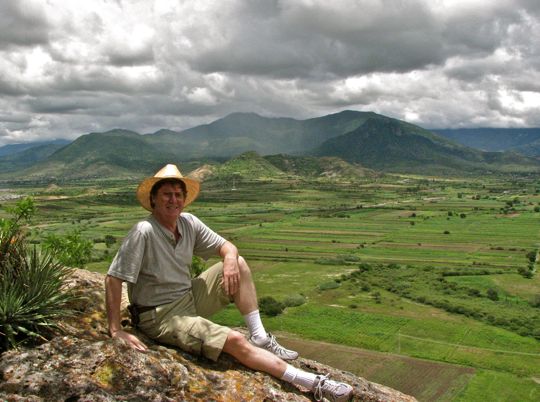 A view from the top. A young Czech who was part of our tour took this photo of me. I was sitting on top of a vertical drop of more than 200 feet. The view was spectacular, but the perch was a bit precarious. From such a position, a defender could observe the approach of an enemy at a considerable distance. 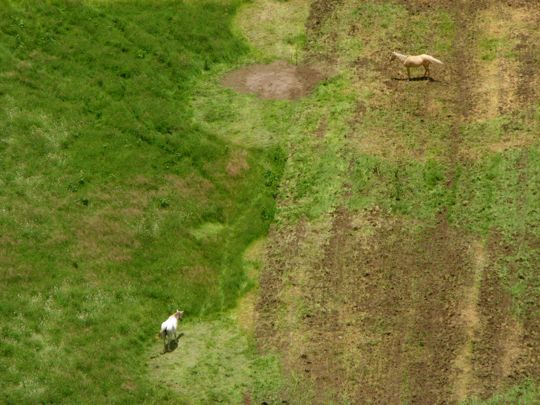 Horses graze in lush fields below the fortress. I took this photo from the perch seen in the previous shot. The horses look a long way down, but it is even further than it appears. I used my longest telephoto setting to bring them into focus. The fields around Yagul, watered by the Rio Seco, appear very productive and would have provided the Zapotec and later Mixtec populations with ample food. 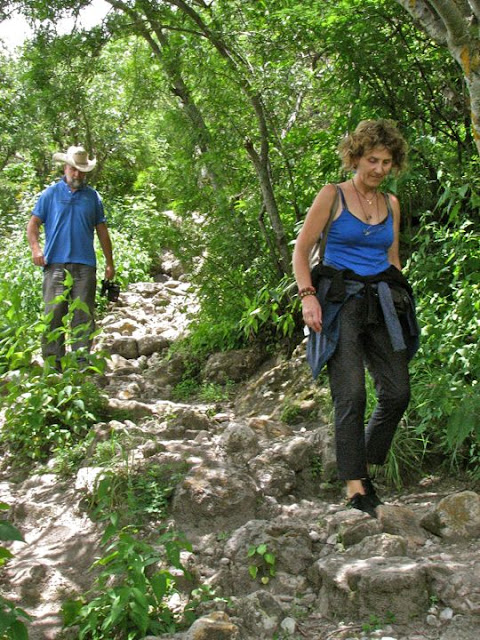 Jesus and Susana descend from the fortress. These two Spaniards were also part of our tour. Among our little group were the Czech man who took my photo, these two from Spain, and an Australian woman, as well as Carole and I from America. The Czech and Australian both spoke English as well as Spanish, Jesus spoke a little English, and Carole and I speak a little Spanish so we all were able to communicate pretty well. We enjoyed each other's company so much that we joined up after the tour to take dinner on the Oaxaca plaza. One of the pleasures of traveling is the opportunity of forming international friendships.

This concludes Part 8 of my Oaxaca series. Next we will look at the spectacular Santo Domingo church and convent complex. I hope you have enjoyed visiting the Yagul ruin. If you would like to leave a comment, you can do so below in the Comments section, or email me directly. If you leave a question in the Comments section PLEASE leave your email address so that I can respond.