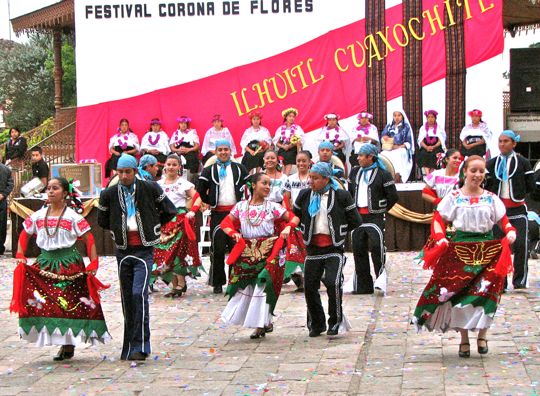 Festival Corona de Flores featured costumed dancers in Plaza Armas. The major focus of our visit to Zacatlán was the Crown of Flowers Festival. In the Náhuatl language of the indigenous performers, the Festival is called Ilhuitl Cuaxochitl. On the stage are the Queen of the Festival and her princesses, bedecked with flowered crowns and necklaces resembling Hawaiian leis. 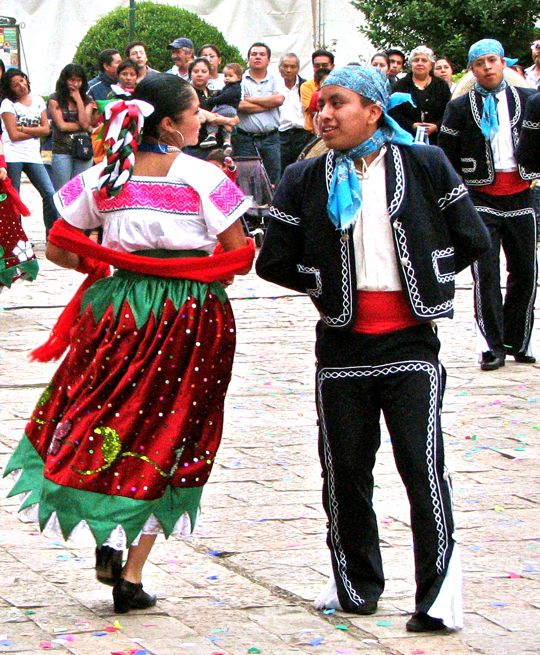 Groups of young students in gorgeous costumes danced the first day. The men above wear charro outfits, lacking only the huge round sombreros. The women wear the national colors of Mexico: red, white, and green. 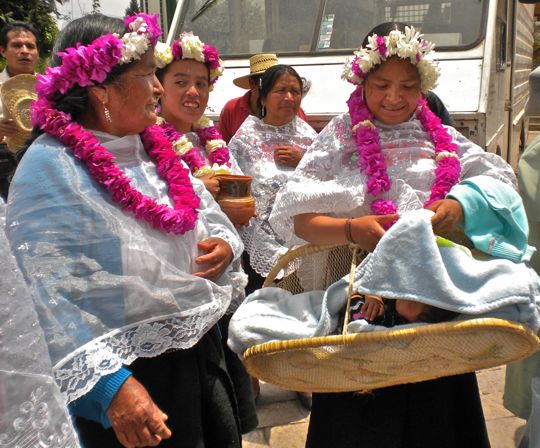 Admiring a new baby. The infant's mother cradles it in a traditional carrier called a chita in Spanish, or in Nahuatl, huácal. She wove the chita from rattan and a fibre from the maguey plant called ixtle. It has a handle which can be used to carry it over the shoulder or suspended from the head. Some of the indigenous women still use traditional clothes for their daily wear. The diaphanous white shawls are especially popular. These women were enjoying the show while waiting their turn to perform. 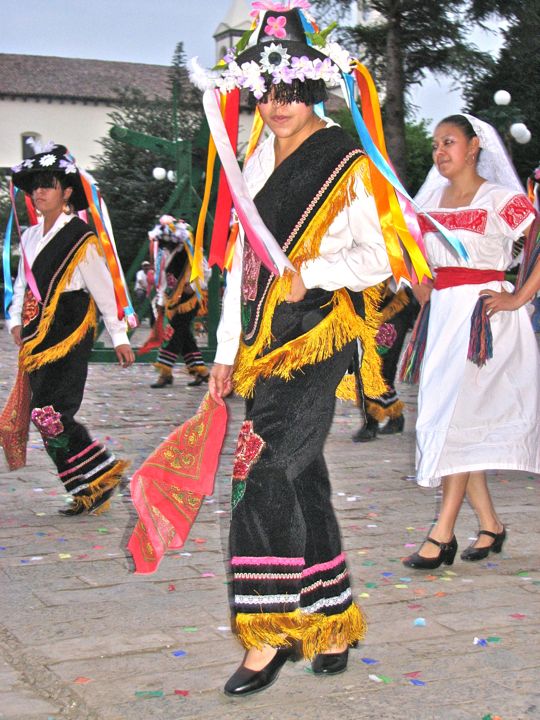 Danza de los Negritos. The costumes for the Dance of the Little Blacks included a hat I found particularly interesting. In addition to its flower adornments, the hat carries a long black fringe that hangs in front of the eyes of the performer, almost as a mask. Both male and female performers wore the costume, and the only way to tell the difference is the style of shoe. The dancer in the foreground above appears to be a female. The long ribbons of the hat and gold fringes of the sash and pants swayed and rippled with the movements of the dancer. The dance comes from the people of the mountains north of Puebla. 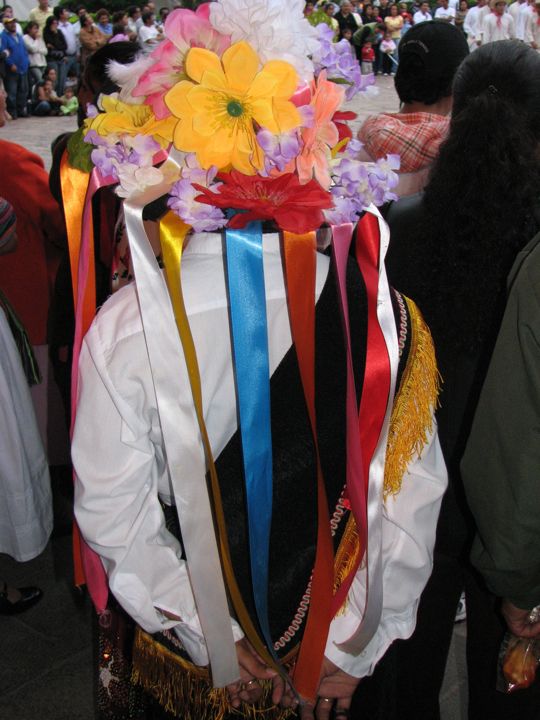 Same dancer, at rest, from the back. The whole hat was a mound of multi-colored flower blossoms. Attaching long ribbons around the rim of broad brimmed hats is a common feature of hats in many indigenous cultures. The Huichol people of the mountains of Nayarit State wear similar adornment on their hats, as do the performers of the Dance of the Old Men, which originated in Michoacan State among the Purepecha people. 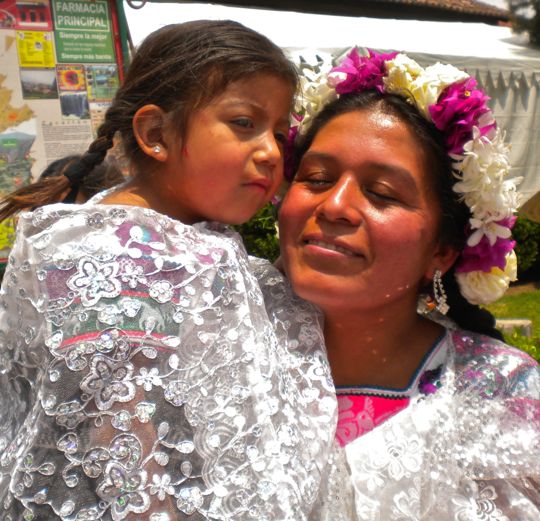 A mother and daughter enjoy a moment together in the afternoon sun. In many indigenous cultures, mother and daughters--including even tiny girls--wear the same style of traditional clothing, topped by the filmy shawls. Photo by Mary Carmen Olvera Trejo. 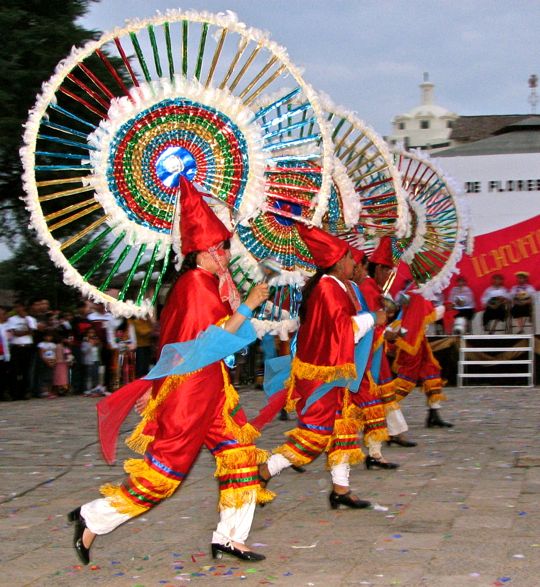 Los Quetzalines climaxed the first evening's performance. The headdresses in particular were spectacular. The feathered hats imitate the plumage of the Quetzal bird, a sacred animal among many prehispanic cultures. Quetzals are found throughout southern Mexico and Central America. Quetzalcoatl, or the plumed serpent, appears in the myths of Toltecs, Mayas, and Aztecs. 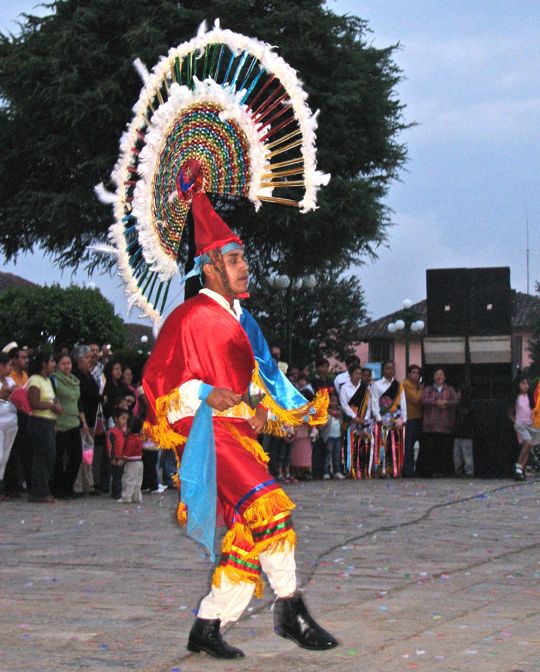 Quetzalin steps out. Los Quetzalines danced vigorously and their lines surged back and forth across the broad, open plaza. Once again, both males and females wore the same costume, identifiable only by their shoes. The Quetzalin above is a man. 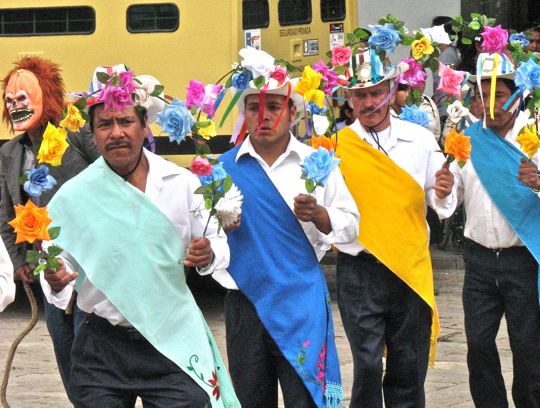 Danza de los Arcos y Tejedores. All the participants in the Dance of the Arcs and Weavers here were male, ranging from teenagers to elderly men. The arcs of flowers they carry symbolize the flowering plants of May. They danced in pairs, in parallel lines, and ultimately formed up for what appeared to be a May Pole dance, which you will see later in this posting. While their dance clothing was less spectacular than the students from the previous day, Mary Carmen assured me that this was the "real thing." These people were performing traditional dances that had come down to them from their ancient prehispanic ancestors. Note the man in the monster mask in the upper left of the photo. 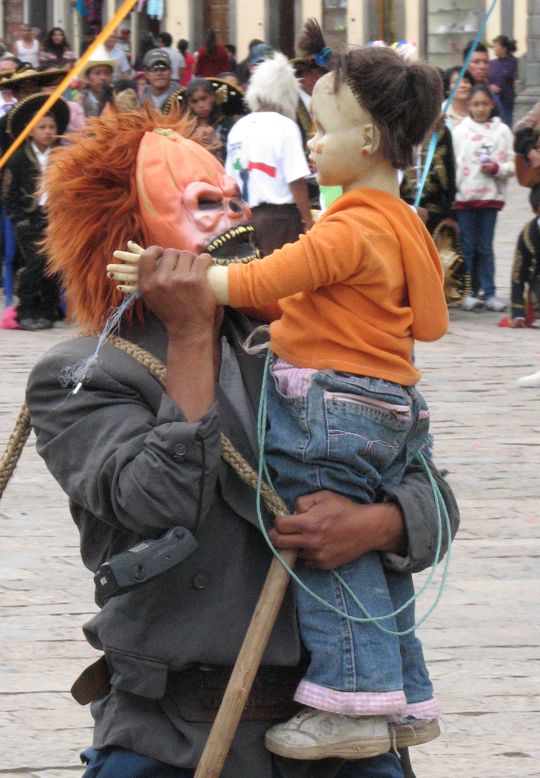 "Dancing With The Stars", Zacatlán-style. These performers, called Güegües, circulated around the fringes of most of dance performances. All of them wore horrific monster masks, and carried long bullwhips with which they produced ear-piercing cracks. The Güegües represent the oldest members of the village, and the whip cracking drives away evil. Inexplicably to me, most of them also carried doll babies strapped to their costumes. The performer above engages in a tender waltz with his doll. 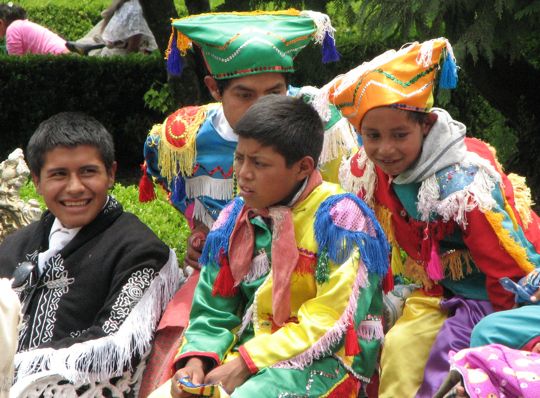 Waiting their turn. These young boys wore multi-colored jesters' outfits as they watched the action from the edge of the plaza. Every once in a while, one of them would peer around shyly to see who might be photographing them. 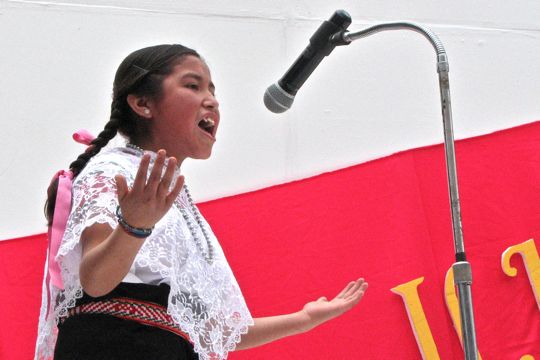 A powerful presence in a small package. At one point, this young girl came to the microphone and launched into an empassioned speech about the oppression of indigenous people and their cultures by the Spanish and the Mexican overlords who succeeded them. Although I couldn't understand every nuance of her speech, it was her poise, delivery and passion that stunned me. She couldn't have been more than about 14 years old, and perhaps younger. Speaking without notes and with complete assurance, she held the audience--including me--spellbound with her dynamic performance. Then, turning to leave the stage, she gave me a shy smile, magically transformed back into a young schoolgirl. 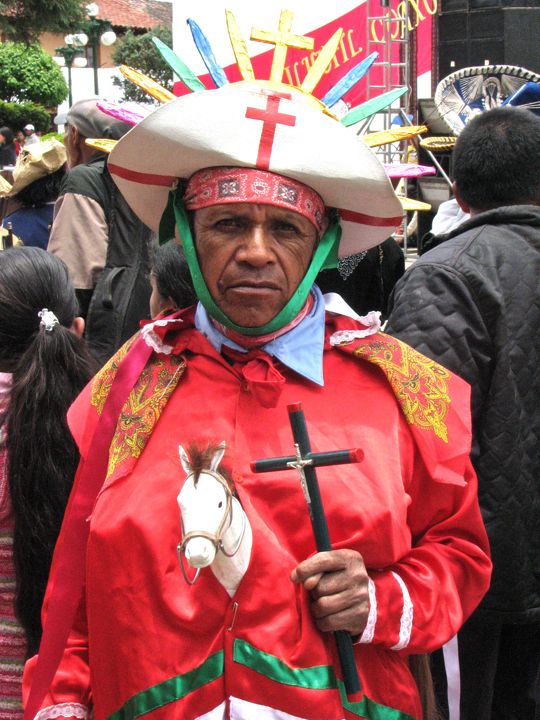 Danza de los Toreadores. This dancer is dresses as a picador, in the Dance of the Bullfighters. A picador is the mounted man in a Spanish bullfight who rides around the bull, sticking short spears called picas into the animal's back. The horse which appears to grow out of his chest represents his mount. The cross he wears on his hat and carries in his hand appears to present a religious theme. However, Catholicism lies as a rather thin veneer over ancient indigenous religious beliefs, and the cross was also an important religious symbol to indigenous people in prehispanic times. 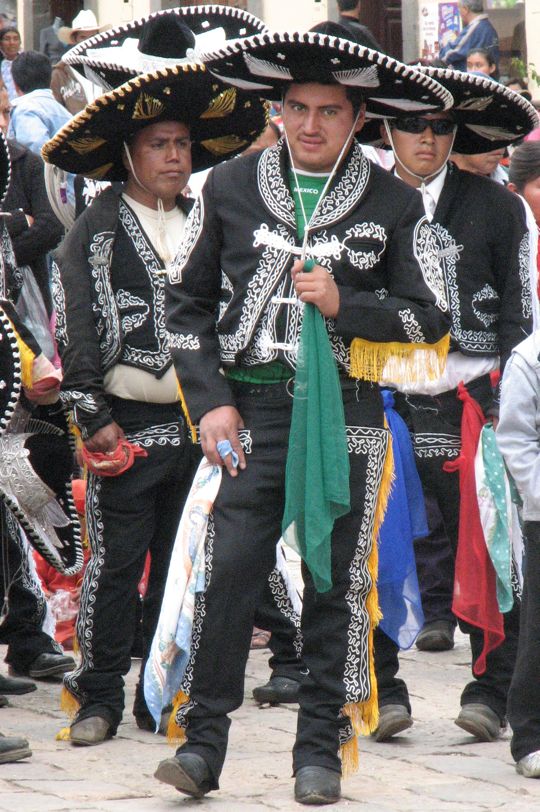 Charros appear ready for action. Wearing the traditional clothing of the Mexican cowboys of Jalisco, these three appeared ready for anything. The charro tradition may have originated in Jalisco, as did tequila and mariachis, but all three have become national symbols of Mexico. 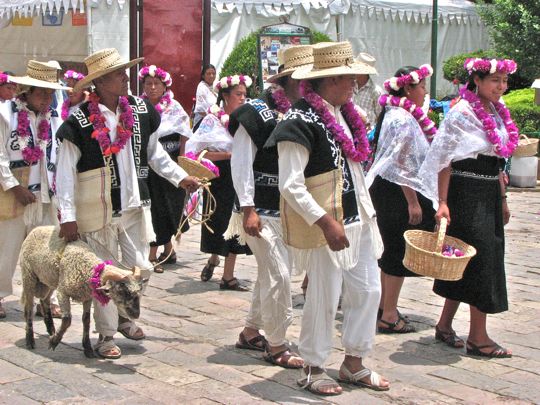 Danza de Tetlalpalol o Petición de Mano Indígena. This beautiful dance reenacts indigenous marriage customs. The grandmother of the boy goes to the family of the girl to petition for the marriage. If the proposal is accepted, the family of the boy dances to the home of the girl, carrying gifts such as the sheep seen above, bread, firewood, tamales, canela (cinnamon), atole (a corn drink), and tepache (a mixture of pulque, brown sugar, and other ingredients). 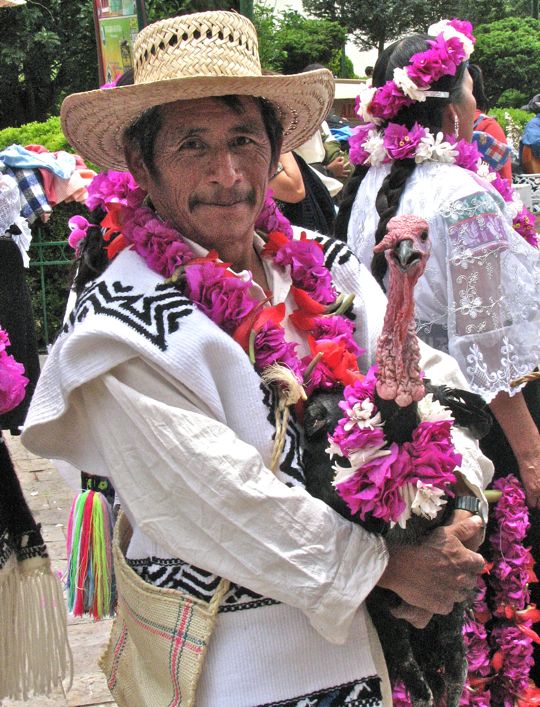 A beauty contest. This Tetlalpalol dancer carried a live guajolete (turkey) as his wedding gift. He grinned and vigorously nodded "si!" when I asked him if the turkey was for the evening dinner. I complemented him on his handsome turkey, which pleased him. When I inquired who he thought was more handsome, himself or the turkey, he and his gathered-round companions howled with laughter. 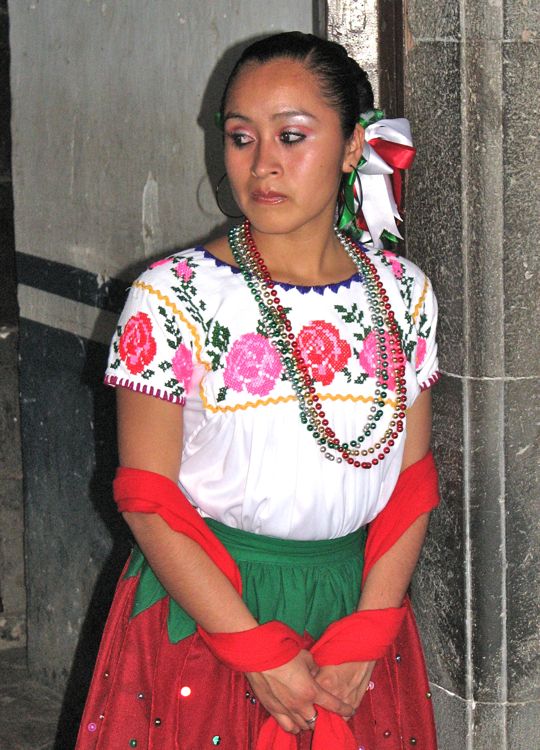 Deep in thought. A young woman rests in a shady corner under the portales during an interlude. In spite of Mexico's many problems, the people are very patriotic and often wear or display the national colors of red, green, and white. 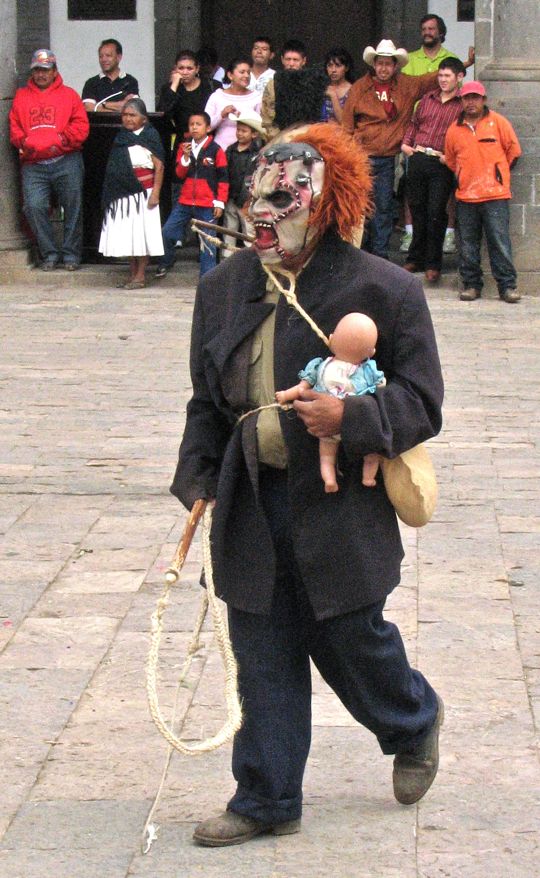 Güegüe on the prowl. With his whip ready to ward off evil forces, this character roamed the perimeter of the crowd, clutching his babydoll. Periodically he lashed out with his long whip. I can't attest to its effect on evil spirits, but it did tend to keep the crowd back at a safe distance. 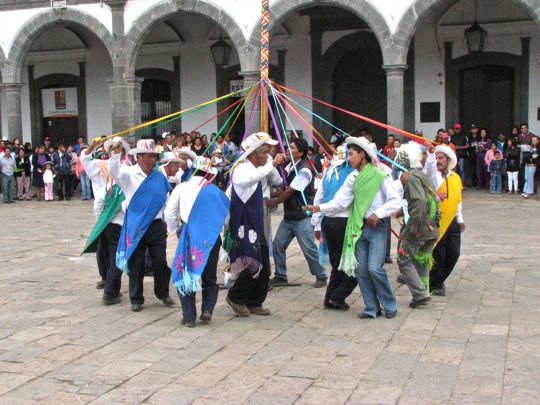 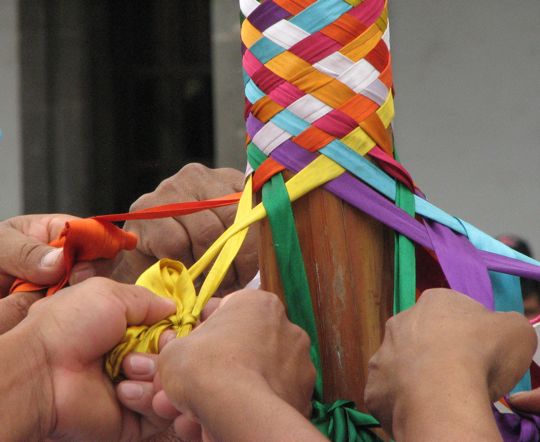 Tying off the ribbons. At the end of the dance, the performers crowded around to tie up the ends of the ribbons, preparing for the last part of the performance. 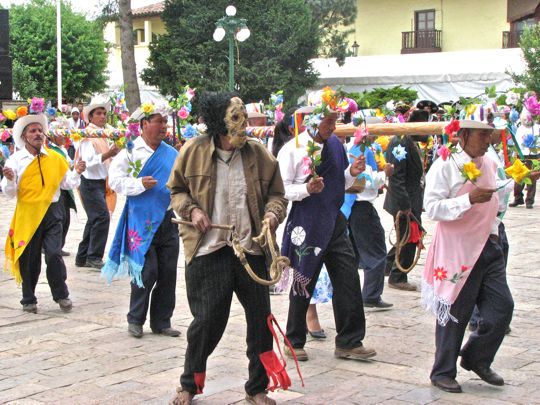 Shouldering the pole and guarded by a Güegüe, the performers march off the plaza. There are some differences from the May Pole dance I remember from long ago. The participants here are all male, and much older and more solemn than the giggly school kids of my day. Also, I regret to say, we didn't have any Güegües in my school days, unless you count the Assistant School Principal. 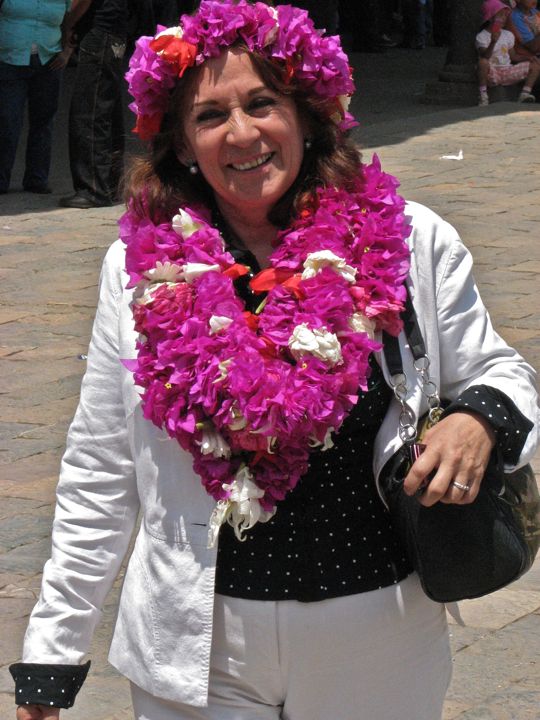 Mary Carmen inspired the Ilhuitl Cuaxochitl several years ago. She was Tourism Director for Zacatlán up until last year, when her political party lost the election. She was very pleased that the current administration agreed to fund it again this year. Mary Carmen seems to know virtually everyone, including countless indigenous people whom she had befriended during her term of office. They obviously appreciate all her hard work, and lit up with smiles whenever they recognized her. To show their appreciation, they draped her with a hand-woven flowered crown and leis.

Also among the appreciated. At the end of the festivities, Mary Carmen told us that it was traditional for the indigenous people to show their appreciation to selected people in a ceremony in the plaza. Christopher and I were among the selectees. Somewhat mystified, we accompanied a small group of others out to the center of the plaza. A troupe of performers danced slowly around us, placing flowered leis around our necks while a small child showered us with flower petals. We were not quite sure what we had done to earn this, but we felt honored nonetheless. Photo by Mary Carmen Olvera Trejo.

Boogyin' off the stage. After adorning us with flowers, the performers danced us out of the plaza in a kind of slow, shuffling two-step. Photo by Mary Carmen Olvera Trejo.

Christopher, Jim, and our new friends. With the Crown of Flowers Festival at an end, we posed for a final picture. I was puzzled when I looked at this photo and saw that everyone was frowning but Christopher and me. Then I realized that we were the only two wearing hats on a very bright day. In addition, I have noticed that indigenous people often assume very solemn expressions in photos, smiling broadly when it is over. We were charmed by the warmth and generosity of these people, and many others we met during our visit. I can well understand the obvious pleasure Mary Carmen takes in working with them. Photo by Mary Carmen Olvera Trejo.

This concludes Part 2 of my series on our Odyssey to Zacatlán. Although our core reason to visit was the Festival, we stayed for several more days to enjoy the many interesting activities and scenic places of Zacatlán and the surrounding area. Future posts in this series will show some of Old Zacatlán, and our visits to spectacular waterfalls, sweeping mountain vistas, a very unusual clock factory, and much more. Stay tuned! If you would like to leave a comment, please do so in the Comments section below or email me directly. If you leave a question in the Comments section PLEASE leave your email address so that I may respond.