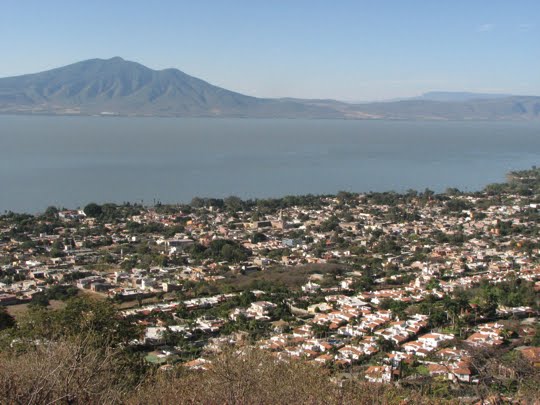 Lake Chapala, with Ajijic below and Mt. Garcia on the south shore. For this and 2 more postings to follow, I decided to use some photos I have taken over the last 3 years since our first visit in 2006. My intent is to illustrate what you might encounter during a random ramble around the streets of Ajijic. Others might choose to portray different aspects, but I am simply including things that caught my eye as a photographer. First, a little background on the general lay of the land

Lake Chapala is the largest freshwater lake in Mexico, approximately 50 miles long and 12 miles wide (80K x 18K). It has an enormous impact on life in the area. The year-round Spring-like climate is largely due to the lake's moderating influence. Geographically, the lake runs on an east to west line from end to end. There is no bridge or ferry across the lake, so a trip from Ajijic on the north shore to Tuxcueca on the south shore takes about a 1 hour drive, even though "as the crow flies", it is only about 15 miles. For a Google satellite map of the Lake Chapala area, click here.

The north and south shores differ in geography, population, and economy. The north shore is a narrow but relatively populous strip of land which varies from a mile or so in width to only a few yards. In some places, the mountains drop down directly to the water. However, this heavily populated area only extends along the north shore from the town of Jocotopec at the western tip of the lake to the town of Chapala, about 14 miles (28 kilometers) to the east. The 35 miles of the north shore east of Chapala is rugged, and very lightly populated. It reminds me a little of Big Sur on California's coast, or the southern coast of Oregon. The north shore has attracted a substantial expatriate population, most heavily concentrated in Ajijic. There is a sophisticated, cosmopolitan feel to the area, but underlying that are a necklace of traditional Mexican villages. The expat presence, and that of well-to-do Mexican weekenders from Guadalajara, has given the area a level of prosperity (and prices) not generally found on the south shore.

On the south shore, the land often extends several miles from the shore to the base of the mountains, lending itself to large-scale agriculture. About every 3-5 kilometers along the shore are small farm towns and fishing villages. For a look at some of these villages, check out my postings on Petatan and Tuxcueca. There are some south shore expats, but far fewer and generally more widely scattered, and they have a much greater need for functional Spanish than their counterparts on the north shore. 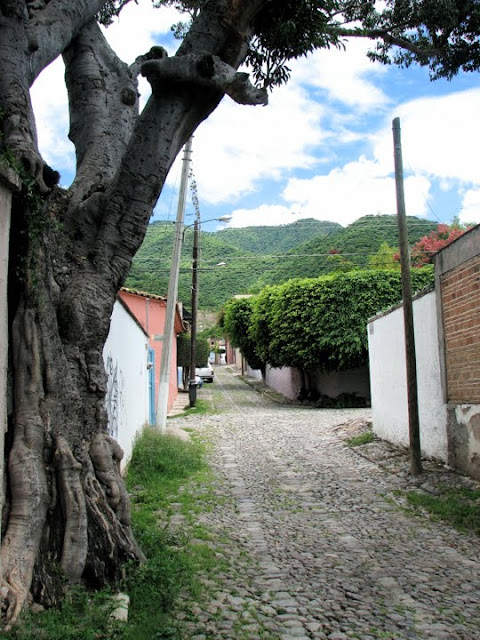 A quiet, tree-lined lane in Ajijic, typical of its backstreets. The cobblestone streets are constructed and maintained as they have been for centuries. The only asphalt-paved street in town is the Carretera, or main road, that follows the lake shore from Chapala to Jocotopec. Some expats grouse about the narrow cobblestone streets, which are bumpy to drive over, and difficult for parking. However, they are very functional in a variety of ways. To me, the most important of these is keeping vehicle speeds down. Because parking on the narrow streets can be difficult, walking is often easiest, and is a much healthier and more interesting way to travel around town. In the photo above, notice the high walls on each side, no doubt concealing lush garden courtyards. Trees, like the one on the left, are directly incorporated into the walls, rather than being cut down as they might be north of the border. In the background, steep green mountains loom over the village and beckon to hikers like myself. When giving directions in Ajijic, one generally says "toward the mountains", or "toward the lake", rather than north or south. 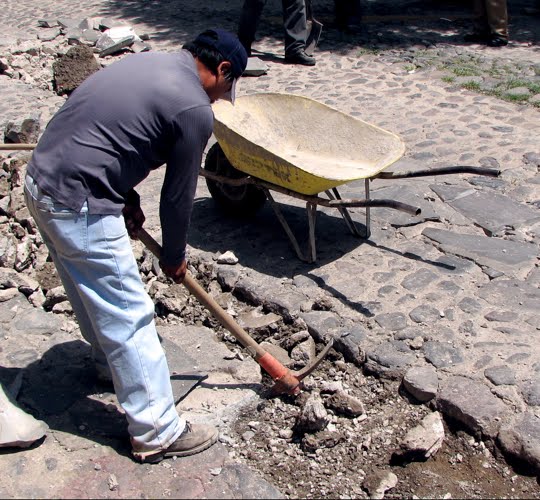 Doing it the old fashioned way. Another functional aspect of cobblestone streets is the ease of repair. All one needs are a few rounded stones from a local arroyo (creek bottom), and a wheelbarrow full of sand which can be created by sifting dirt through an old window screen. A couple of men with shovels and a pick can fill a pot hole in a very short time. No hot asphalt, and no expensive (and air polluting) machines are needed. Nor do you need a big crew of trained men to operate them. Granted, cobblestone streets probably need repairs more often than asphalt, but labor is cheap in Mexico, and the constant repairs provide steady, if low-paying, employment. 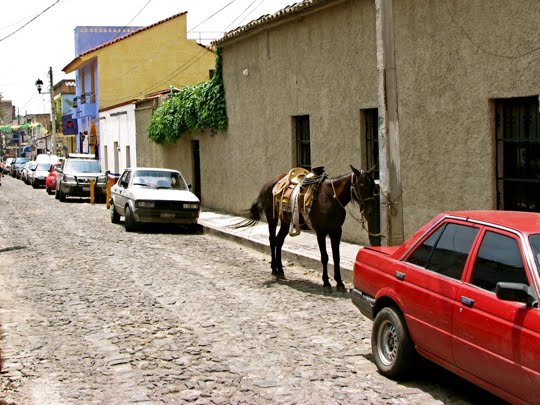 And speaking of parking. In spite of the increasing number of expensive SUVs that crowd the streets, particularly when the "snowbirds" are down fleeing the northern winters, Ajijic is still a Mexican village at heart. Local cowboys trot into town to shop or visit a friend and end up parking their horses the same as if they had arrived in a pickup truck. When walking the cobblestone streets, one has be keep a wary eye for the byproducts of their equine transport. Still, it all just lends to the charm of the place. 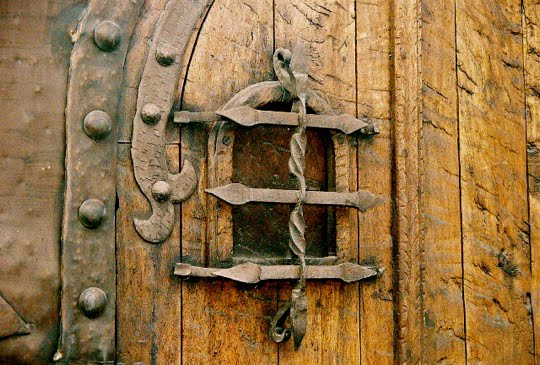 Doorways and gates are seen as media for self-expression. This detail of a large wood and wrought-iron gate set in a high stone wall is typical of the beautiful work done by local craftspeople. All around town one can find blacksmiths who are able to create lovely doors, windows, and gates. All you need to do is bring in a picture of what you want, or even just a rough drawing with measurements, and they will create it, sometimes with their own unusual flourishes. This is another trade in which little has changed over the centuries. 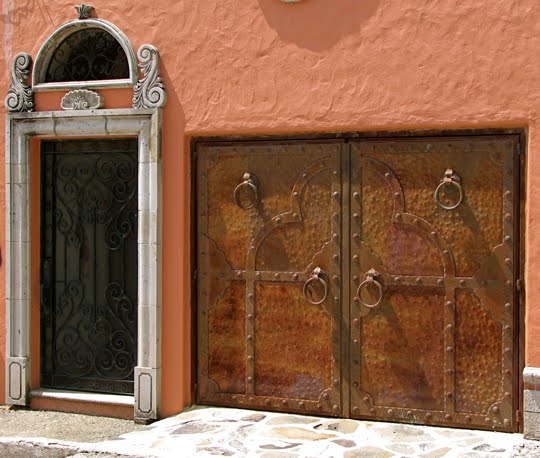 Another dramatic entranceway. I was attracted to the distinctly Moorish feel of the door and gate to this home. I particularly liked the warm, rust-orange metal work with the large rings set in the gate. 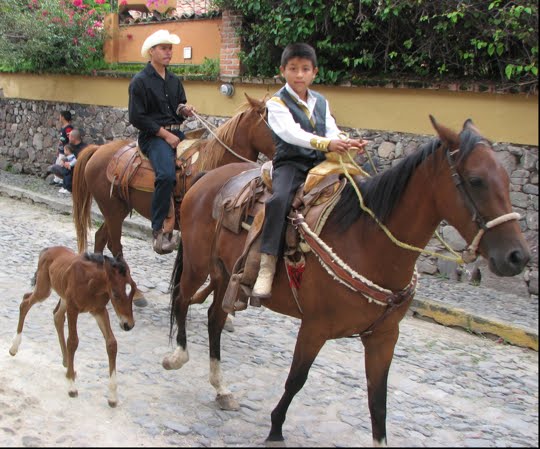 Mexican cowboy culture is very strong here. This father and his son are out for a ride, accompanied by the very young colt trotting anxiously beside its mother. Kids are brought up in the saddle, almost literally. I have seen children of toddler age, with legs far too short to reach the stirrups, deftly steering animals 20 times their size and weight. 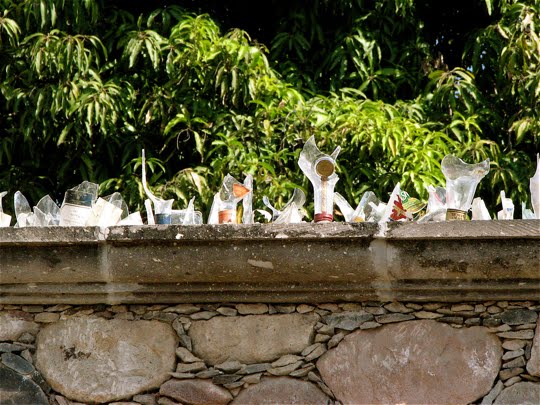 Mexican barbed wire. While there is very little person-on-person crime in the area, minor break-ins and burglaries are all too common. I suppose it is to be expected when so many have so little, and a few have a great deal. A common strategy to thwart those with an inclination toward wall-climbing is to set broken bottles in the concrete along the top of the walls. It appears to be fairly effective, however some of the wealthier expats have taken to installing electrified wire. At first I was put off by all these security measures and thought perhaps expats were presenting a paranoid face to the local community. Then I noticed that most of the poorest Mexican homes also have steel doors and bars on the windows. I should add that in two years living here, I have never had a break-in or anything stolen from my home or car. When I lived in a "safe" condominium community in Salem, Oregon, I had my car stolen right out of my driveway. 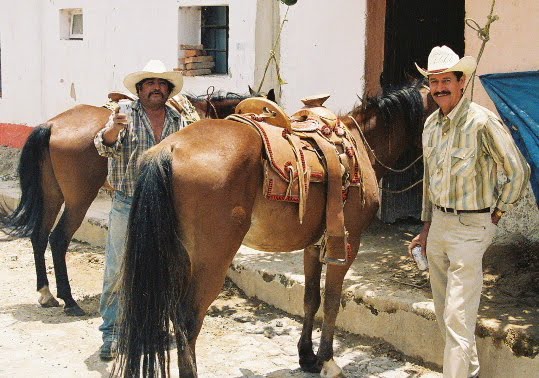 "Laid-back" is a way of life in Mexico. While strolling a backstreet, I encountered these friendly cowboys. When I asked if I could photograph them, they immediately agreed and offered me a cold beer from their supply. Given that it was barely 10 AM (and the fact that I don't drink alcohol) I politely declined. Their easy-going response to me is typical of most of my interactions with local Mexicans. Most Mexicans who own horses seem to take great pride in the condition of their animals, saddles, and riding gear. These horses seem very well kept. Fountain at the entrance to the Ajijic Plaza. Sometimes water gushes from this fountain, sometimes not. I have never figured out a rational schedule. Mexico sometimes operates on a logic all its own. Besides cooling the area around it, the fountain serves the drinking needs of the local street dogs. They also like to cool themselves on hot days by climbing in and dipping their bellies in the water, preparatory to a long snooze in the shade. 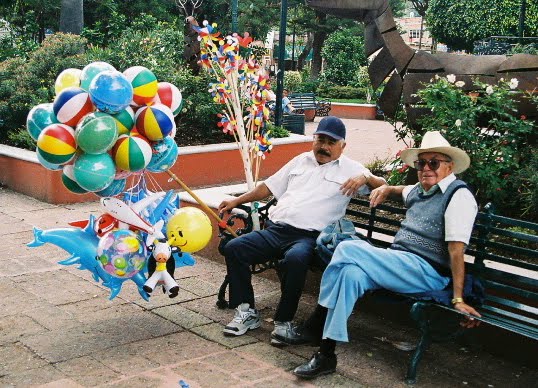 Location, location, location. This spot evidently suits the interests of the local balloon seller. I took this picture 3 years ago and I still find him sitting in the same spot on the same bench every time I stroll through the plaza. I don't know whether he makes more money here than he would somewhere else. In fact, I have never seen him make a sale. But perhaps, in Mexican terms, that's not really the point. 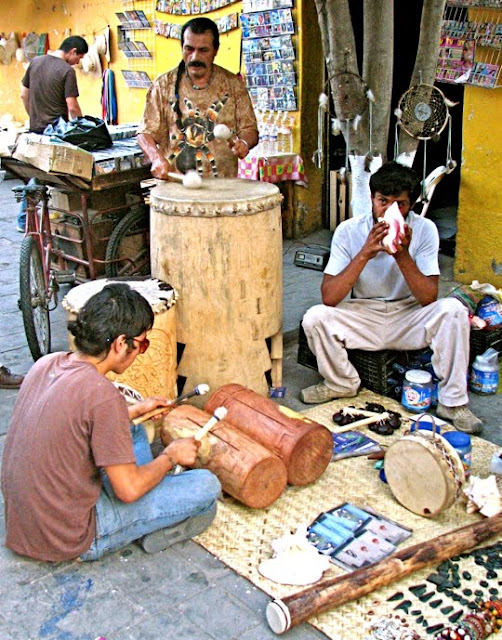 Music, the old-fashioned way. These young guys appear regularly in the plaza, often near the fountain shown previously. They make, play, and sell instruments in the fashion of their distant ancestors. The one on the right is blowing a conch shell, while the other two keep rhythm on differently-styled drums. The tubular instrument on the mat at the lower right is filled with kernels of corn which make a rustling, tinkling sound--like rain, or a waterfall--as they rush from one end to the other when the tube is held upright. The musicians enjoy drawing a crowd and then handing out different instruments and encouraging the passersby, especially children, to join them in the music.

Abuelo, his nieta and their colt. A grandfather and his tiny granddaughter stroll through a pasture near the lake shore. They were on their way to feed their horses some grain from the sack over the old man's shoulder. A moment later, the colt noticed them and rushed over to join his mother at the feed trough. Up north, horses and cattle would be carefully penned. In Mexico, they wander about in common areas. This is yet another of the charming aspects to life in a Mexican village, even one such as Ajijic with its cosmopolitan overlay. 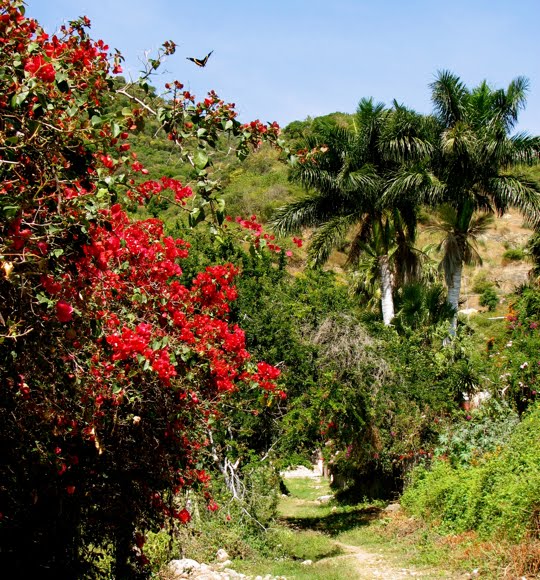 A callejon of color. This callejon (alley) connected two streets on the western edge of town. The red bougainvillea and other flowering bushes along the callejon formed what was almost a tunnel of color. Alongside the callejon, overrun by the flowering bushes and vines, was an ancient stone wall, perhaps from the earliest Spanish times. Nothing was spectacular about this callejon, but I enjoyed its quiet, soothing beauty.

This completes Part 1 of my rambles through Ajijic. I hope you enjoyed it. Feel free to leave comments in the section below, or email me directly if you'd like. I'll pick up the journey next week in Part 2.